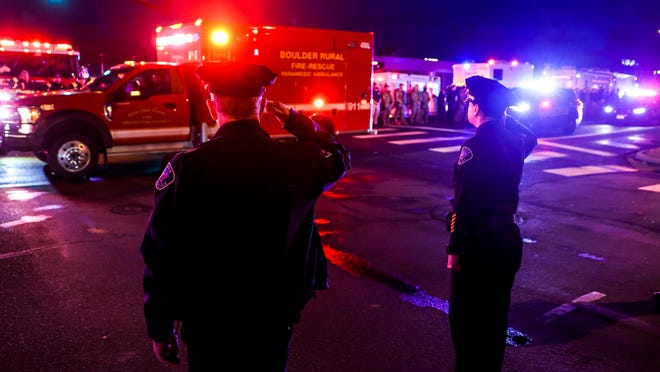 Ten people, including a police officer, were shot dead in a supermarket in Boulder, Colorado on Monday. This was the second mass shooting in the United States in a week.

At a press conference late Monday, authorities said the attacker was wounded and in custody and was being treated in hospital. Citing the ongoing investigation, the authorities did not disclose his name or details of the shootings.

“This is a tragedy and a nightmare for Boulder County,” said Boulder County District Attorney Michael Dougherty. “They were people who passed their day doing their shopping. I promise the victims and the people of Colorado that we will ensure justice. “

The shooting comes days after eight people – six of them women of Asian origin – were killed by a gunman in three spas in Atlanta and a nearby county.

Here’s what we know right now:

Where did the shoot happen?

The incident occurred around 2:30 p.m. at King Soopers in Boulder, about 25 miles northwest of Denver and home of the University of Colorado.

University of Colorado chief basketball coach Tad Boyle said the tragedy struck his mind during his team’s second round basketball game against Florida State on Monday.

“It puts basketball in the right place,” said Boyle. “Win or lose tonight, I just felt an emptiness in my stomach. Another senseless act of violence that we as a country have experienced many, many times. “

King Soopers, a Denver-based subsidiary of grocery giant Kroger, operates more than 150 stores in Colorado and Wyoming. Kroger is based in Cincinnati.

In a statement Monday, Kroger said it was “appalled and deeply saddened by the senseless violence that has taken place in our King Soopers store”. The company offered prayers and support for all concerned.

After mass shootings elsewhere, Kroger asked buyers to leave firearms at home in 2019. The policy change came a day after grocery competitor Walmart made a similar change.

Who were the victims?

The murdered officer was identified as Eric Talley, 51, who had been with the Boulder Police Department since 2010, said Boulder Police Chief Maris Herold. He went to the store after calling about shooting and someone with a gun, she said.

“He was one of the most outstanding officers in the Boulder Police Department in every way, and his life was too short,” Dougherty said of Talley.

Dozens of police and emergency vehicles, their lights flashing, escorted an ambulance that carried the officer from the shooting range after dark. Some residents stood on the route with their arms raised in greeting.

The identities of the other nine victims were not disclosed until late Monday as police were still notifying their family members.

What was the motive for the fatal attack?

The police did not provide any immediate information about a possible motive for the rampage and could not say whether the shooter knew any of his victims or had any business connections.

It also remains unclear whether the attack began in the store or in the parking lot where witnesses said they saw victims.

James Bentz, who was shopping in the market, told the Denver Post that he and others ran to the door when gunfire rang out. “I was there before a rush,” he said.

Video footage showed some windows of the market blown out. KMGH television news in Colorado reported that police also came under fire upon arriving at the store.

SWAT teams and armored police vehicles arrived. A live streaming video from a bystander showing the police outside the market on a megaphone telling the shooter to give up: “The entire building is surrounded,” announced an official. “You have to surrender. Come out unarmed with your hands up.”

Who was the shooter?

The suspect’s identity was not immediately revealed, but officials said he was the only person who was not fatally injured in the saga.

The online video showed a handcuffed man being led away from the store with a bloody leg. The man, who was wearing shorts but no shirt or shoes, was taken away in the ambulance. Its role in events remains unclear.

Police would not definitively state whether there was only one shooter, but the directives for on-site protection have been lifted and Boulder Police Commander Kerry Yamaguchi said there was “no ongoing public threat” after the arrest.

It remains unclear how the attacker was captured. Police did not disclose the type of weapons or weapons used, although Boulder Police Chief Maris Harold said they received a call at the station “about a possible person with a patrol rifle”.

A story of shooting sprees with firearms

Colorado has a gritty, recent history of shootouts, all within 70 miles of Boulder.

The first was a 1999 Columbine High School massacre. Thirteen people were shot dead and 21 injured before the perpetrators – two students – committed suicide.

In 2012, a lone gunman opened fire in an Aurora, Colorado movie theater during a showing of “The Dark Knight Rises.” The attacker, who was convicted and sentenced to life imprisonment, used tear gas and multiple weapons as he sealed doors and terrorized 400 people. Twelve died and 58 others suffered gunshot wounds.

In May 2019, a student was killed and eight others injured in an ambush attack on STEM School Highlands Ranch, a charter school in Douglas County. As in Columbine, the attackers were college students. One pleaded guilty and the other is waiting for the trial in May 2021.