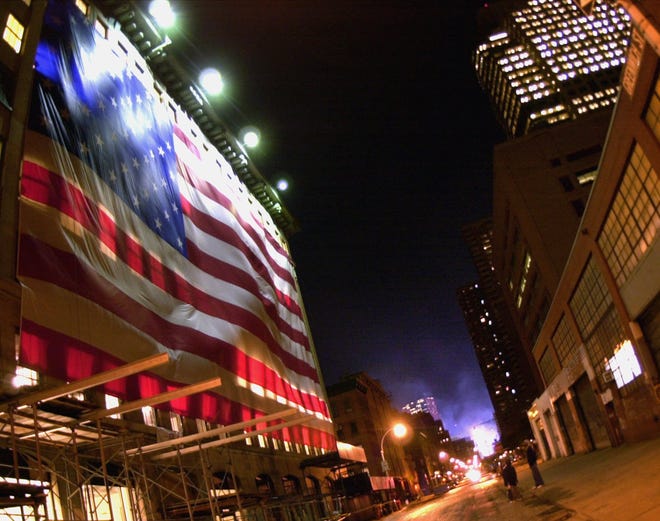 “Bad times bring out the best in people.”

It has to be true. Otherwise it wouldn’t be a cliché.

On the other hand, stereotypes like doctors should perhaps be recertified every now and then. Is there really no point in flattery? Has anything good ever come to those who wait?

Do Bad Times Really Make Us Better People? The 20th anniversary of September 11th – the 18th month of the COVID-19 pandemic – offers a reality check. Also a sobering study of contrasts.

Because when 9/11 has brought us together, COVID seems to be tearing us apart.

“With COVID, there was a moment of greater unity early on,” said Dan Cassino, professor of government and politics at Fairleigh Dickinson University in Madison, New Jersey. “[But] it passed pretty quickly “,

That feeling of national unity. The common sympathy for the victims and their families. The shared outrage over their attackers. The glorification of firefighters, ambulance workers and others who risked their lives sometimes gave them to save their fellow citizens. The applause for the soldiers going to war in Afghanistan who are now – unbelievably – just coming home.

Compare that to COVID.

The meanness. The split. The naming on both sides. The fact that in a national emergency we have pages that in some ways dwarf 9/11. A total of 2,977 people were killed in the Twin Towers, the Pentagon and in the plane crash off Shanksville, Pennsylvania. About 621,000 Americans have died from COVID so far – and it’s not over yet.

20 years later:How a vision for the 9/11 Memorial became a piece of New York’s everyday fabric

“Division is a fashionable thing now – being divisive and insulting people,” said Frank Messina, the Norwood, New Jersey-born poet who became a kind of bard of the 11th with his volume of poetry, “Disorderly Conduct, 2002” that arose from his work helping rescue workers in Liberty State Park.

He remembers how the country came together in the months after September 11, 2001. That is what his poems were about.

“Why would I want to knock someone else down?” he said. “My intention is to uplift people. My poetry is not about resisting. It’s about making suggestions.”

His posture seemed to be the usual at the time.

Volunteers from the South and Midwest rushed to search the debris at Ground Zero. People from all over the country donated blood. Schoolchildren in reddish Texas wrote letters to children in bluest New York.

People seemed to see the best in each other. Liberals admitted that Rudolph Giuliani had adopted a sublime tragic tone when he said: “The number of victims will ultimately be higher than any of us can bear.” Conservatives, meanwhile, admitted that Father Mychal Judge, a gay man, was undoubtedly a good man as he rushed to the Towers to be with the firefighters and prayed for them.

Messina wrote a poem at the time:

“Love is strength in numbers,

your will is tied to hate

the giant is awake “

If America was a giant then, it is more like a nation of quarreling midgets today. What happened?

Mitch Albom:When death surrounds us, don’t hesitate to tell a loved one how you are feeling

“I think the quick answer is that it’s apples and oranges, and it’s really difficult to compare national emergencies,” said Aaron RS Lorenz, dean of the School of Social Science and Human Services at Ramapo College in Mahwah, New Jersey .

It’s best not to over-simplify at first.

Discord didn’t just go away on September 11th. If you were a Muslim – or looked like you might be – you weren’t in America’s big group hug.

“These moments of national unity are not necessarily a good thing,” said Cassino. “Think of the rise in anti-Arab American hate crimes after September 11th.”

COVID, on the other hand, wasn’t just bickering and pointing. The crowds applauding medical staff, the volunteers making masks are proof that not all of the better angels of our nature have flown south.

But America’s mood now seems very different than it was 20 years ago.

“When something like 9/11 or Pearl Harbor or even the Persian Gulf War happens, our identities as’ Americans’ ‘become more important because of what is happening around us,” said Cassino.

Already in 2001 we were an irritable, irritable, divided nation – inclined to think in a narrower sense of identity. “Gay”, “Black”, “Christian”, “Southern”, “Feminist” seemed real to many of us in a way that “American” didn’t.

Then the towers fell. A wall of smoke streamed down Lower Broadway. People have been seen – it’s still incredible when you think back on it – falling to their death from the 90th floor.

All of this was brought about by an enemy who considered us all Americans and nothing else.

“Those other identities that could divide us – like political parties, race or religion – just aren’t that important by comparison,” said Cassino. “So we are being unified as a country. That doesn’t heal these cracks in our society. It just covers them up as long as we think of ourselves primarily in terms of this national identity.”

9/11 gave us an enemy. We had been attacked by a foreign enemy. We were against them. And there was broad, general agreement about who “they” were.

But who is to blame for the current emergency? A virus?

Yes, it does – but a virus isn’t a very satisfying villain. “9/11 gave us an outside enemy,” said Messina.

Maybe it was really hate, more than love, that brought us together after 9/11. But in any case, we could all agree on the culprit.

Which points of view are realistic? Which are nonsense? It’s obvious – to whoever does the talking.

“The fact that the response to the virus became politicized so quickly meant that the responses were shaped by partisanship, gender and other dividing lines, making them more visible and important,” Cassino said.

Paranoia is a symptom common to all pandemics. Any of us could be the enemy. Each of us could be a potential carrier. In science fiction terms, 9/11 was “War of the Worlds”. COVID is “the thing”. It can take the shape of your neighbor or the guy in the grocery store.

“The potential enemy could be anywhere,” said Messina. “Who is that woman in the elevator across from me? The ignorant soldiers of this invisible enemy could be our own loved ones.

Did 9/11 change life in the US forever? More Americans think this way more than ever before

But this time around, it’s not just the nature of the threat that is different. Likewise the country.

In 2001 there was no Facebook, Twitter or Parler yet. The terms “red” and “blue” in the political sense were only a year old. Social media was still a seedling. Now it’s grown as high as an elephant’s eye.

“I think the biggest problem with social media is that it has destroyed know-how,” said Lorenz. “These are really complex topics. Infectious diseases, military operations in the Middle East – people deal with these things all their lives. Now they’re grouped into memorable memes and quick posts. “

Suspicion of authority is not new. But social media has turned it to steroids. Previously, if you had doubts about your doctor, you can get a second opinion. Now, thanks to the internet, we can all get a second, third, fourth, fifth, sixth opinion. At some point we are sure to find someone we like.

According to Lorenz, social media had “given various experts in numerous areas a false sense of equality.”

And it’s not just social media that has undermined people’s trust in authority over the past 20 years. It is the authority itself.

Do you remember “weapons of mass destruction”? Do you remember Colin Powell at the UN in 2003? “We listened to experts and they lied,” said Lorenz. “This creates an anti-intellectualism.”

Is it so surprising that some people may not blindly trust the government right now? Even if Dr. Anthony Fauci from 50 years of experience in immunology speaks and probably knows what he is talking about? He still speaks for the government.

In 2001 there was trust – or at least more – trust in institutions, said Lorenz.

“There was a Gallup poll in December 2000 when Bush went through the courts against Gore,” he said. “The question you were essentially asking was, if this case goes to the Supreme Court, do you trust the court to come up with an outcome that you think is acceptable?”

Gallup noted that the Supreme Court decision did not lead Americans to lose confidence in the judiciary by a margin of two to one. They also said the Supreme Court was the best institution to settle the dispute.

Would the public be so confident today – after several years of controversial Supreme Court appointments? And if the Democrats “grabbed” the court, as some have suggested, would they do it any more?

“What could we see now if a poll were conducted about the US Supreme Court ending masking requirements and vaccinations?” said Lorenz.

So a lot has changed in the 20 years between 9/11 and COVID-19. To what end? Will reason, empathy and solidarity finally prevail? Lorenz likes to think so. He must think so.

“I believe facts will prevail,” he said. “I am a trustworthy person.”