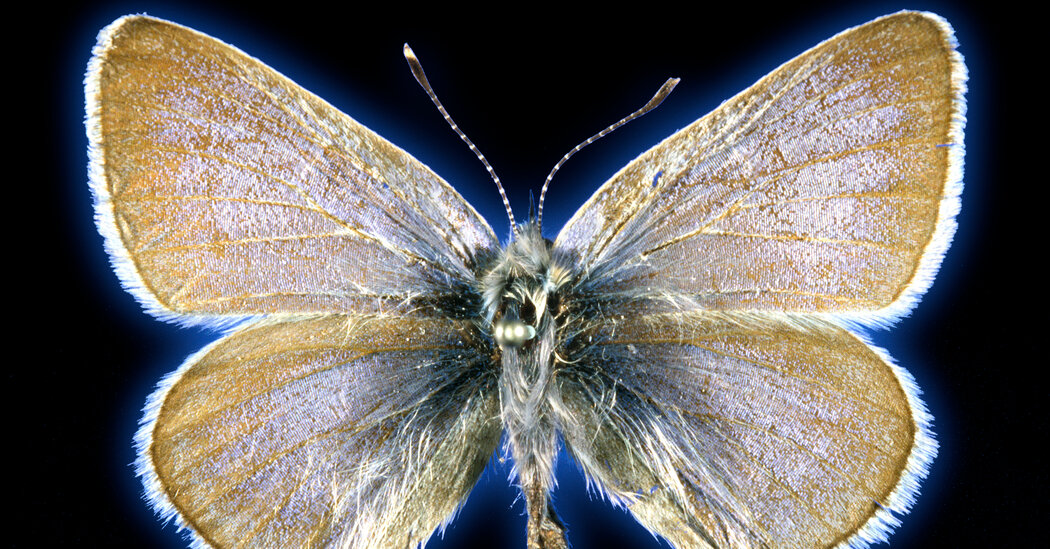 More than a century ago, a bluish butterfly darted through the sand dunes of the Sunset District in San Francisco and laid its eggs on a plant called deerweed. As the city’s development overtook the dunes and weeds, the butterflies also disappeared. The last blue Xerces butterfly was collected in 1941 by a Lobos Creek entomologist who later complained that he had killed one of the last living members of its species.

But was this butterfly really a unique species?

Scientists all agreed that the dire fate of Xerces blue – the first butterfly known to be extinct in North America due to human activity – was a loss to biodiversity. However, they disagreed as to whether Xerces was a distinct species, a subspecies of the widespread silvery-blue butterfly Glaucopsyche lygdamus, or even just an isolated population of silvery-blue butterflies.

This may seem like a scientific quirk, but if Xerces blue weren’t actually a genetically distinct lineage, technically it wouldn’t actually be extinct.

Now researchers have sequenced a near-complete mitochondrial genome from a 93-year-old museum specimen, suggesting that the Xerces blue was a species of its own, which they think could properly be called Glaucopsyche xerces, according to a paper published Wednesday in Biology Letters.

“It shows the importance of not just collecting specimens, but protecting them,” said Corrie Moreau, director and curator of Cornell University’s Insect Collection and author of the paper. “We can’t imagine how they’ll be used 100 years from now.”

Durrell Kapan, a senior research fellow at the California Academy of Sciences who was not involved in the research, said he found the new results “stimulating and very exciting,” but added that there may be limits to this type of research, because “what does? two organisms of different species cannot always be directly addressed with genetic information. “

Dr. Kapan is working with Revive & Restore, a non-profit initiative to restore extinct and endangered species through genetic engineering and biotechnology, on a separate genomics project on Xerce’s blue butterflies and close relatives.

Researchers started working on the project a few years ago when Dr. Moreau was at the Field Museum in Chicago. She and Felix Grewe, now director of the Phylogenomics Initiative at the Grainger Bioinformatics Center at the museum, searched the museum archives of Xerce’s blue butterflies to find the least damaged specimen that would theoretically produce the best preserved DNA.

“You’re grinding up a piece of an extinct butterfly,” said Dr. Moreau. “You only have one chance.”

Dr. Moreau removed a third of the butterfly’s abdomen, a part of its body full of muscle, fat, and other tissue, and sequenced it. This old DNA breaks down into short fragments. Historically, researchers sequenced long, unbroken stretches of DNA by chopping them up and putting them back together. But a new sequencing technology enables researchers to work with already chopped, fragmented DNA. “We just leave this step out,” said Dr. Grewe.

After restoring their sequences, the researchers examined publicly available data from other related butterfly specimens.

Their mitochondrial DNA sequences did not appear to be similar. They suggested that the Xerces blue was a species in its own right and that two other butterflies traditionally viewed as subspecies of the silvery blue butterfly – the Australis and Pseudoxerces clades – also different species and the closest living relatives of the Xerces- Could be blue.

These results are surprising as these two butterflies are found in Southern California, a far cry from the original home of Xerces blue on the San Francisco Peninsula.

But the CO1 gene is “a very small sample of the genome,” said Dr. Kapan, adding that he doesn’t think the new paper has definitely settled the species debate.

From the California Academy of Sciences, Athena Lam, a genomics researcher, Dr. Kapan and others shed light on where Xerces lies on the evolutionary scale, said Dr. Lam.

These kind of genomic studies, said Dr. Kapan, could show where populations of surviving species of the genus Glaucopsyche can be found that might be well suited for possible reintroduction in the San Francisco sand dunes. According to the new paper, Australis or Pseudoxerces would be good candidates for an investigation, the latter of which has wings reminiscent of Xerces’ brilliant blue.

Dr. Moreau said she hoped the new study would shed some light on blue butterflies that are currently critically endangered, such as the El Segundo blue that lives in coastal sand dunes in southern California and the Karner blue, which is most common in Wisconsin occurs where wild lupins grow.

And although the blue of Xerces has long ceased to exist, the deer herb that once needed it was recently replanted in the sand dunes at the Presidio, waiting for a somewhat familiar future butterfly.