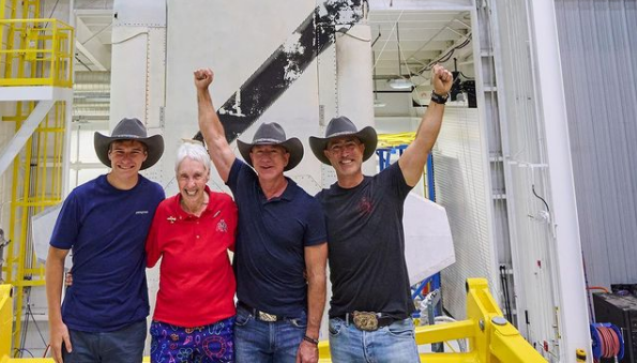 Jeff Bezos and his crew are still completing their training for Blue Origin’s first-ever manned spaceflight, scheduled for Tuesday, but Bezos’ space company already has clients for the future flights of the New Shepard suborbital spacecraft.

“We plan to operate two more flights in 2021, a total of three flights and many more in the future,” said Ariane Cornell, Director of Astronaut Sales at Blue Origin, during a briefing at the company’s suborbital launch site in West Texas today. “So we have already built a robust pipeline of interested customers.”

A good number of these prospects come from the auction Blue Origin closed last month to sell the open seat on the first flight. The award was $ 28 million, but Blue Origin said this person had to postpone the trip due to a scheduling conflict. So the company turned to Dutch teenager Oliver Daemen, who had made a lower bid but was taken over for the second flight.

Daemen has taken the place, and the auction winner will fly later.

Blue Origin did not disclose how much successor Flyers signed to pay; the price is apparently negotiated on a case-by-case basis. But CEO Bob Smith suggested the first flights won’t be cheap.

“We believe 7,500 people from over 150 countries took part in the auction,” he said. “The interest is generally very high. So the question really comes down to the price. … Our early flights come at a very good price. You saw that there was quite a lot of interest during the auction. We had people well into the twenties [$20 million], all very interested. Some of it was obviously distorted by the auction. “

The proceeds from the auction will be used by Blue Origin’s charitable foundation, Club for the Future, for space-related charitable activities. But Blue Origin wants to make a profit from seat sales, and a successful flight on Tuesday would be hard to beat as an advertisement.

Smith said the second crewed flight was scheduled for September or October.

Blue Origin’s closest competitor in the suborbital space market, Virgin Galactic, flew billionaire founder Richard Branson last week – but Virgin Galactic is still in flight test mode. The first of around 600 commercial customers already in the queue are not expected to join until next year. This could give Blue Origin the ability to build its own list of paying passengers.

In an Instagram video posted by Bezos, Daemen said he was excited to be part of the Blue Origin crew. “I feel like I have a responsibility because I’m the youngest in space,” he said.

Cornell said the crew – made up of Daemen, Funk, Jeff Bezos and his brother Mark Bezos – finished two days of training at Blue Origin Launch Site One in West Texas, which has living quarters as well as a lounge and dining room and fitness center. The training includes getting to know the procedures for getting in and out of the autonomously controlled capsule as well as safety procedures for the flight itself. There is a mockup of the capsule for practice.

The launch is scheduled for Tuesday at 8 a.m. CT (6 a.m. PT), and Blue Origin’s streaming video coverage is slated to begin on its website 90 minutes before the launch. Steve Lanius, flight director for the New Shepard mission, said there were no technical issues in the way of takeoff – and while there is a possibility of thunderstorms early Tuesday, the weather is expected to clear up by takeoff.

“We assume that we will be ready on time for the start,” he said.

The crew capsule is sent skyward by a hydrogen-powered booster and disconnected a few minutes after take-off to cross the 100-kilometer (62 miles) mark, which serves as the internationally recognized boundary of space. (Virgin Galactic and the Federal Aviation Administration, on the other hand, use a 50 mile standard.)

At the top of the ride, the four-man can unbuckle his seat.

“You will experience weightlessness for about three to four minutes and look out of those big, beautiful windows. Maybe do a couple of somersaults, ”Cornell said at the meeting. “I get the impression that Wally Funk in particular is pretty excited to play some of them in zero-G, but then we’ll ask them to take their seats again.”

A set of parachutes helps the capsule descend into the West Texas desert while the booster lands on a pad a safe distance away. The whole thing is said to take about 11 minutes – which is a few minutes shorter than NASA astronaut Alan Shepard’s groundbreaking suborbital space flight in 1961.