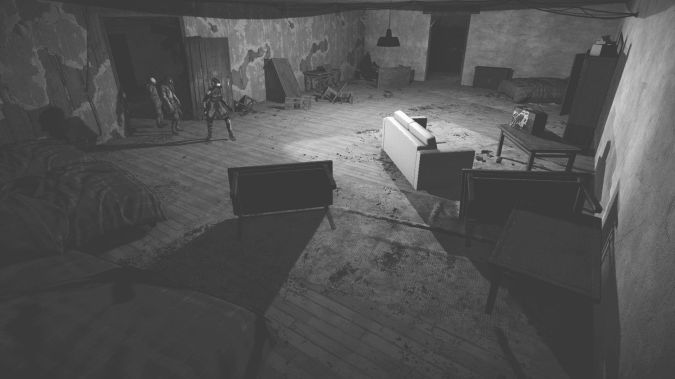 Ashwalkers is an open-ended survival simulator set on the planet 200 years after a massive volcanic disaster, leaving it barren and covered in blizzards of gray dust. On a journey to the dome’s cathedral, a post-apocalyptic utopia on the edge of the world, the players lead a group of four explorers: Petra, the fearless leader; Sinh, a skilled fighter; Kali, a young scholar; and Nadir, the always attentive scout.

Ashwalkers offers craft, resource management, survival systems, and a variety of interpersonal and moral judgment, resulting in one of 34 possible endings. The player’s choice is the core mechanic of the game.

“For us it is more of a laboratory than a dystopian story,” said Ashatteer’s creative director Matteo Gaulmier.

If that’s true, Ashwalkers is the dirtiest lab on this side of the apocalypse. The game is covered in clouds of ash that constantly swirl and lie on the screen like an old roll of film. Clear black outlines and red splashes of blood mark an otherwise desaturated environment, a nod to the graphic novels Sin City and Le Rapport de Brodeck, a French series that portrays the horrors of xenophobia from the perspective of a remote German village at the end of World War II. Meanwhile, the Ashwalkers soundtrack slowly builds on itself in electronic waves and eventually traps the players in a heavy audio atmosphere inspired by Disasterpeace’s work in Hyper Light Drifter.

“When we started the game, we had a more classic apocalypse like the nuclear winter, and slowly we were changing the subject to something more original, less seen,” said Gaulmier. “We have found the ashen apocalypse. That wasn’t exploited much so we set our sights on it and slowly the game began to shift from black and white to shades of gray almost naturally. This, of course, related directly to the ashes, the gray ashes and the subject of death. “

Ashwalker’s independent studio building, Nameless XIII, is based in Toulouse, France, and Gaulmier himself is a graduate of the ETPA School of Photography and Game Design. The CEO of Nameless XIII is Herve Bonin, co-founder of Dontnod and co-founder of the iconic adventure series Life is Strange. Bonin chose to help Gaulmier and his student team build Ashwalkers after discovering they shared philosophies regarding interactive narration.

“His way of telling stories, asking himself questions about how to make a compelling story, what the options are, and how to play in a vast universe,” said Bonin. “It’s certainly not the same game as Life is Strange, but the same kind of detail, the same kind of reflection behind it, and the same methodology that the students have already learned. I see talent, and when I see talent, it’s just one thing to support it. Matteo and his young team do amazing things. “

With 34 different endings, some Ashwalker playthroughs are short and limited to a single area, while others are longer and cover more ground. Ashwalkers don’t judge players and don’t offer karma trees for “good” and “bad” decisions. It allows players to play around with the limits of morality and survival and what it means to be human in extreme and everyday circumstances.

“We don’t want to judge our players,” said Gaulmier. “We wanted to give them the tools to judge themselves.”

Ashwalkers is going to PC in April and can now be wishlisted on Steam.