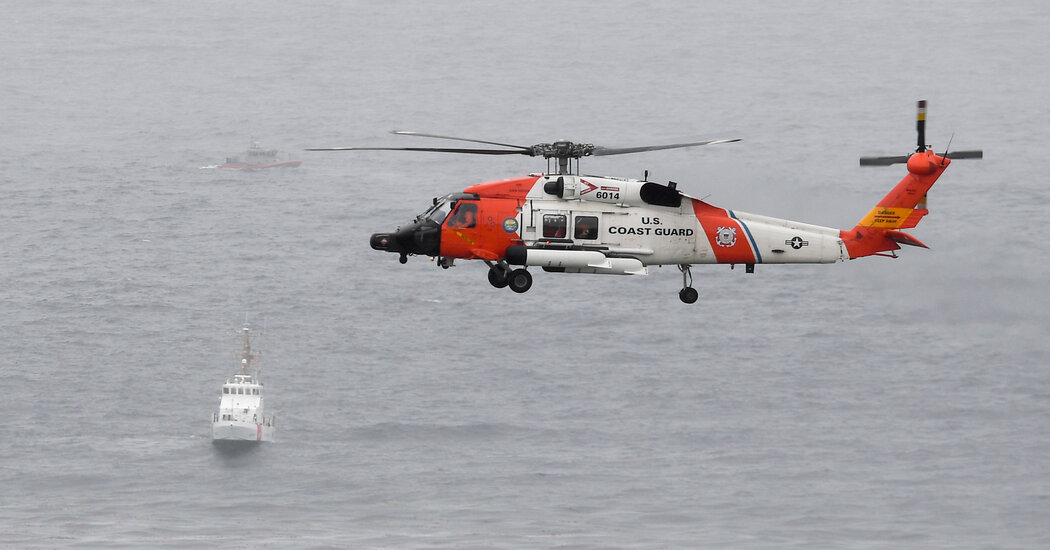 At least three people died and more than two dozen more were hospitalized after an overcrowded boat used to smuggle migrants broke apart on a reef off the coast of San Diego on Sunday morning.

About 30 people were on board the 40-foot cabin cruiser when it struck the rocks in rough weather near Point Loma, a peninsula that separates the Pacific Ocean and San Diego Bay, according to the fire department of San Diego.

The shipwreck led to a large-scale search and rescue operation at sea, on land and in the air. Rescue workers take a break to protect the boat’s passengers from riptide and hypothermia.

The surf was roughly five to six feet tall, with water temperatures hovering around 60 degrees by the time the boat drifted towards the reef around 10 a.m., officials said. The search for additional passengers continued on Sunday afternoon.

The episode again reminded of the dangers of crossing the border by sea, a treacherous journey migrants have made more frequently over the past year, authorities said.

“The smugglers don’t really care about the people they exploit,” said Jeff Stephenson, a Border Patrol inspector in the San Diego sector, during a news conference on Sunday afternoon. “They only care about profit. For them these people are just goods. “

Information on the nationalities, ages and genders of the boat’s passengers was not immediately available from the authorities, who said there was no manifesto for the ship.

The captain of the boat was taken into custody, according to border guards who said the captain had gotten a little out of hand and spoke to agents on the ground.

Rick Romero, a lifeguard lieutenant with the San Diego Fire Department, said at the news conference that six people were rescued from the water and one person rescued from the Point Loma cliffs.

He said rescuers performed CPR on three people who died and that many of the passengers were able to swim or go ashore on their own. Officials described the injuries to the 27 other passengers as widespread, saying some were hypothermic.

“The boat was on the reef, bouncing back and forth, and then slowly falling apart,” said Lieutenant Romero. “So there is no boat. It’s all rubble. “

Some of the passengers had personal flotation devices, authorities said, although it was not immediately clear whether there was enough for all passengers and whether they were wearing them.

Rescue workers said a commercial support ship first alerted them that a boat was drifting towards the surf line near the Cabrillo National Monument on the southern tip of the peninsula around 10 a.m. The first report showed there was only one person on the boat, they said.

“The ocean is inherently unsafe,” said Agent Stephenson. “The reality is that regardless of method, especially at sea, illegally crossing the border is unsafe because the water temperatures are as they are and, as the lifeguards have described, the surf is high. It’s a very dangerous scenario. “

As of late 2009, Southern California authorities have trapped more than 6,500 people by water on American territory. About a fifth of them were arrested last year.

Even without the dangers of a high-speed ban in poor lighting conditions, California’s big surf and cool water can claim life. Passengers drowned after jumping ashore from a small vehicle for a short swim, including a man whose body washed up in La Jolla in 2017.

San Diego firefighters and lifeguards, as well as federal agencies including U.S. Customs and Border Protection and the U.S. Coast Guard, helped with rescue operations on Sunday.

The accident occurred just three days after the Border Patrol announced it had banned a panga 11 miles off the coast of Point Loma with 21 people on board.

All 21 passengers on this boat – 15 men and six women – were Mexican nationals, according to authorities, who said two smugglers on the ship would be bringing charges against the federal government.

Border guards said the boat’s captain and passengers were not prevented from making the Sunday voyage, despite stepping up enforcement and making efforts over the weekend to publicize the operation.

Agent Stephenson said maritime fears rose 92 percent in fiscal 2020, which ends Sept. 30, compared to fiscal 2019 as more migrants attempt to enter the U.S. by sea. Many of the boats begin their journey from beach areas along the Baja Peninsula such as Rosarito, Mexico, about 40 miles from Point Loma, he said.

“We have seen a dramatic increase in the past few years,” he said.

CJ Chivers contributed to the coverage.