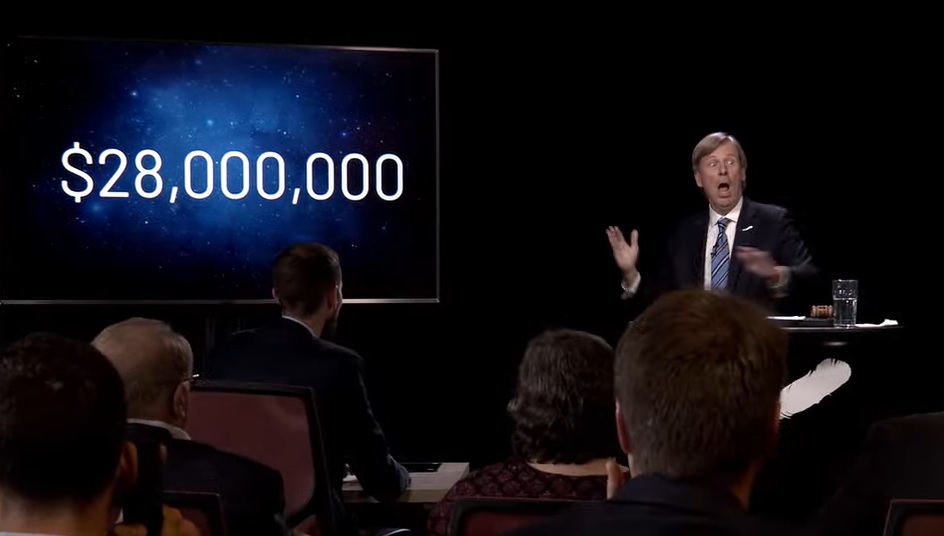 It took RR Auction about eight minutes to finalize the bidding process at its Boston headquarters. That is a few minutes less than the expected duration of the New Shepard mission, which is scheduled for July 20 at the Blue Origin suborbital spaceport in west Texas. And there are a few more minutes than the still-to-be-determined winner will likely spend in zero-G during the flight.

The winner, currently only known as Bidder No. 107, experiences around three minutes of weightlessness and a large-format view of the curved earth beneath the black sky of space. It will be one of the most expensive trips per minute in history. But it will also go down in space history books, in part because Jeff Bezos, the founder of Blue Origin and Amazon, will be one of the crew members.

It didn’t take long for speculation to begin about the winner’s identity – and SpaceX CEO Elon Musk, Bezos’ biggest multi-billion dollar space rival, was thrown into the mix:

Rumor has it that Elon won the bid and gave place to Lucky Swisher (@karaswisher’s mother).

Next level on the feud. Stay tuned. https://t.co/JlVsuvOOSJ

Blue Origin put New Shepard’s suborbital launch system through 15 unmanned tests, but the July flight will be the first to bring people on board for an actual launch. The “First-to-Fly” award and the opportunity to spend some time with America’s richest individual undoubtedly added to the value proposition.

Open seat bids began last month, and the highest bid as of today was $ 4.8 million. After RR Auction’s Steve Little started the live bidding, the price escalated quickly – sometimes in increments of $ 1 million.

“The more you pay for it, the more you enjoy it,” Little said during a rare bid break. He said more than 20 qualified buyers signed up for the live auction. RR Auction will add a 6% buyer’s commission to the purchase price of $ 28 million.

Ariane Cornell, director of astronaut strategy and sales at Blue Origin, said during today’s webcast that the winner’s identity will not be revealed until all documents are signed, likely in the next few weeks.

Proceeds from the sale will go to Club for the Future, Blue Origin’s nonprofit educational foundation. “With $ 28 million, we’re going to delight a lot of kids,” said Cornell.

She said that nearly 7,600 people from 159 countries registered for the online auction during the five-week period.

“To say we are humble is an incredible understatement,” said Cornell.

The final price is above the approximately 20 million US dollars that the multi-million dollar investor Dennis Tito is said to have paid in 2001 for the first tourist trip to the International Space Station. (Adjusted for inflation, Tito still paid more.) But it’s less than the $ 55 million private astronauts are currently believed to be paying for trips to the space station in SpaceX’s Crew Dragon capsule.

Bezos announced Monday that he and his brother Mark Bezos would be flying in the next month, which coincides with the 52nd anniversary of the Apollo moon landing. The auction winner would turn the crew into a trio, but Cornell said there will actually be a quartet on board. “The fourth and final crew member will also be announced soon, so stay tuned,” she said.

The four space fliers only need a few days of training before the estimated 10-minute flight to and from the Blue Origin facility in West Texas. You will spend the night in an “astronaut village” that Blue Origin built at launch site one, with living quarters named after Mercury astronauts and female aviation pioneers.

In contrast, Virgin Galactic, the suborbital space company founded by British billionaire Richard Branson, is targeting the 50 mile altitude that the Federal Aviation Administration has set as the standard for awarding commercial astronaut wings. After more than a decade of development, Virgin Galactic appears to be well on its way to flying customers to Spaceport America in New Mexico next year.

Approximately 600 people have signed up for Virgin Galactic’s suborbital space flights and are paying reserved fares in the range of $ 250,000. That price is sure to go up when Virgin Galactic resumes sales, especially given the results of today’s auction.

Blue Origin, meanwhile, is taking a cautious approach to selling space. It never publicly announced a ticket price, although CEO Bob Smith said in 2019 that he expected the price to run to “hundreds of thousands of dollars”.

Will the price be dramatically higher now? Apparently it depends on what the market has to offer. In any case, Cornell said today’s auction will set the tone to fill the flights following next month’s milestone launch.

“We will be contacting the most competitive bidders starting today to give them access to these early flights,” she said.