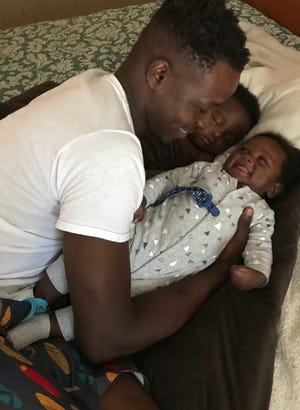 A former Georgia MP was charged Wednesday after video showed him repeatedly slapping a man in the face during an arrest last year.

Brandon Myers, 25, who is white, was fired for “excessive use of force” shortly after a video went viral in September showing him and another deputy nailing and beating 26-year-old Roderick Walker, a black man. Walker was arrested after a vehicle he was in was stopped due to a broken taillight, and the encounter was taped on camera by Walker’s friend, Juanita Davis.

Myers, who has been fired from the Clayton County Sheriff’s Office, has now been charged with assault and violation of the oath of office, according to the Atlanta Journal-Constitution. A grand jury decided last month not to indict Walker on two counts each, the battery and the obstruction or obstruction of law enforcement officers.

One of Walker’s attorneys, Shean Williams, said in September that Walker, Davis, their five-month-old son, and Davis’ five-year-old son from a previous relationship dropped off a rental car and paid a man $ 10 to drive them home. The police stopped the vehicle they were in because of a defective taillight.

Williams said MPs asked Walker, who was in the passenger seat, for his ID and Walker said he didn’t have one and asked why the police needed it. MPs then asked Walker to get out of the vehicle and tossed him to the ground as they tried to handcuff him, Williams said.

“I was scared. I feared for my life and I just pray, just hope it doesn’t happen to anyone else,” Roderick Walker told reporters at his law firm in September, his left eye was still bloodshot.

Walker suffered a mildly traumatic brain injury when he was knocked to the ground and beaten, Jane Lamberti, a lawyer for Walker, said in September. The sheriff’s deputies denied Walker the medical care he needed and requested, she said.

Myers was hired from the sheriff’s office in November 2019. In less than a year, Myers was involved in five other traffic-stopping violence incidents, Williams said.

The indictment comes when Clayton County Sheriff Victor Hill is under investigation for improper use of force when he ordered detainees to be held for hours despite adhering to the police.

Hill was removed from office in June and charged with human rights abuses in April.

In the April indictment, prosecutors alleged that Hill used inappropriate force despite having received training that violence should not be used as punishment. He also approved a directive stressing that the restraint chair “will never be approved as a form of punishment,” but only used with a violent or uncontrollable person to prevent injury or property damage when other techniques are found to be ineffective.

The other Deputy Associate involved in the arrest, D. Riddick, resigned in September days after the incident. He was not charged.