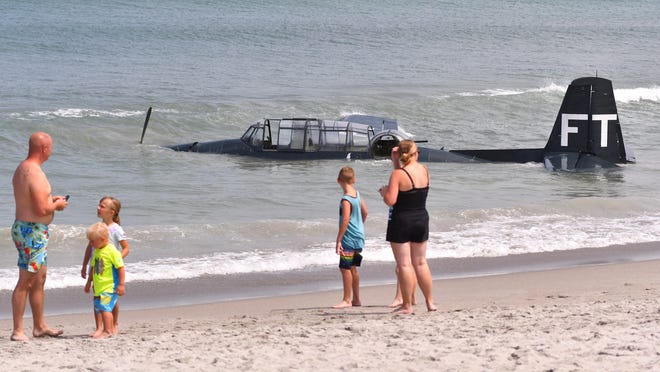 MELBOURNE, Fla. – A World War II-era aircraft participating in the Cocoa Beach Air Show landed in the ocean near the beaches at Patrick Space Force Base Saturday afternoon.

No one was injured, emergency officials said.

In the recordings, the aircraft descends in a controlled manner before it comes to a standstill in the ocean and throws up spray mist and foam.

In another video recorded by Melbourne-based Melanie Schrader, the plane’s single propeller stopped spinning as it glides toward shallow water. Dozens of people in the water look up as it passes close above them, and onlookers are shocked as they watch the little plane make its descent.

The plane landed safely on the ocean’s surface.

“He was stuttering down the beach and I was like, ‘Oh, it doesn’t sound good,’ and I was just starting to film,” said Schrader.

“It looked like (the pilot) pulled up at the last moment avoiding any onlookers, there were a lot of people on the water, and then I saw him up on the plane. It looked like he was fine, “she said.

The pilot declined medical treatment following the incident, according to officials from the Brevard County Fire Department.

“The TBM Avenger that performed at the Warbird Parade had a mechanical problem and the pilot was able to bring the aircraft close to the coast. The rescue personnel were on site immediately and the pilot is fine,” said Cocoa Beach Air officials Show in a prepared statement.

Officials did not identify the pilot.

The TBM Avenger is a torpedo bomber that was used by the US Navy during World War II.

According to the Cocoa Beach Air Show website, the plane underwent extensive restoration in the incident on Saturday before returning to flight last year.

After retiring from the Navy, the aircraft was used in Davis, California from 1956 to 1964 as a fire-fighting bomber for the US Forestry Service. The warbird was also used as a Georgia Forestry Commission fire bomber, according to the Valiant Air Command website.

The 1945 TBM Avenger was restored over an 18-year period by Titusville-based Valiant Air Command, which returned the old torpedo bomber to flight in January 2020.

“I saw a video of it – and it just reminded me of what Sully was doing in the Hudson River,” said Air Show chairman Bryan Lilley of Pilot Chesley’s emergency landing of US Airways Flight 1549 in New York that year 2009. Sully “Sullenberger. Both engines were disabled by a bird strike and all 155 people on board survived.

“It was amazing. What a skill of this pilot,” said Lilley of the ocean landing near Cocoa Beach.

“I feel very bad for her. You just managed to restore the (plane). You have invested so much time, “said Lilley of Valiant Air Command.” I’m very happy that the pilot is fine, but I’m really sorry the plane landed in the water. “