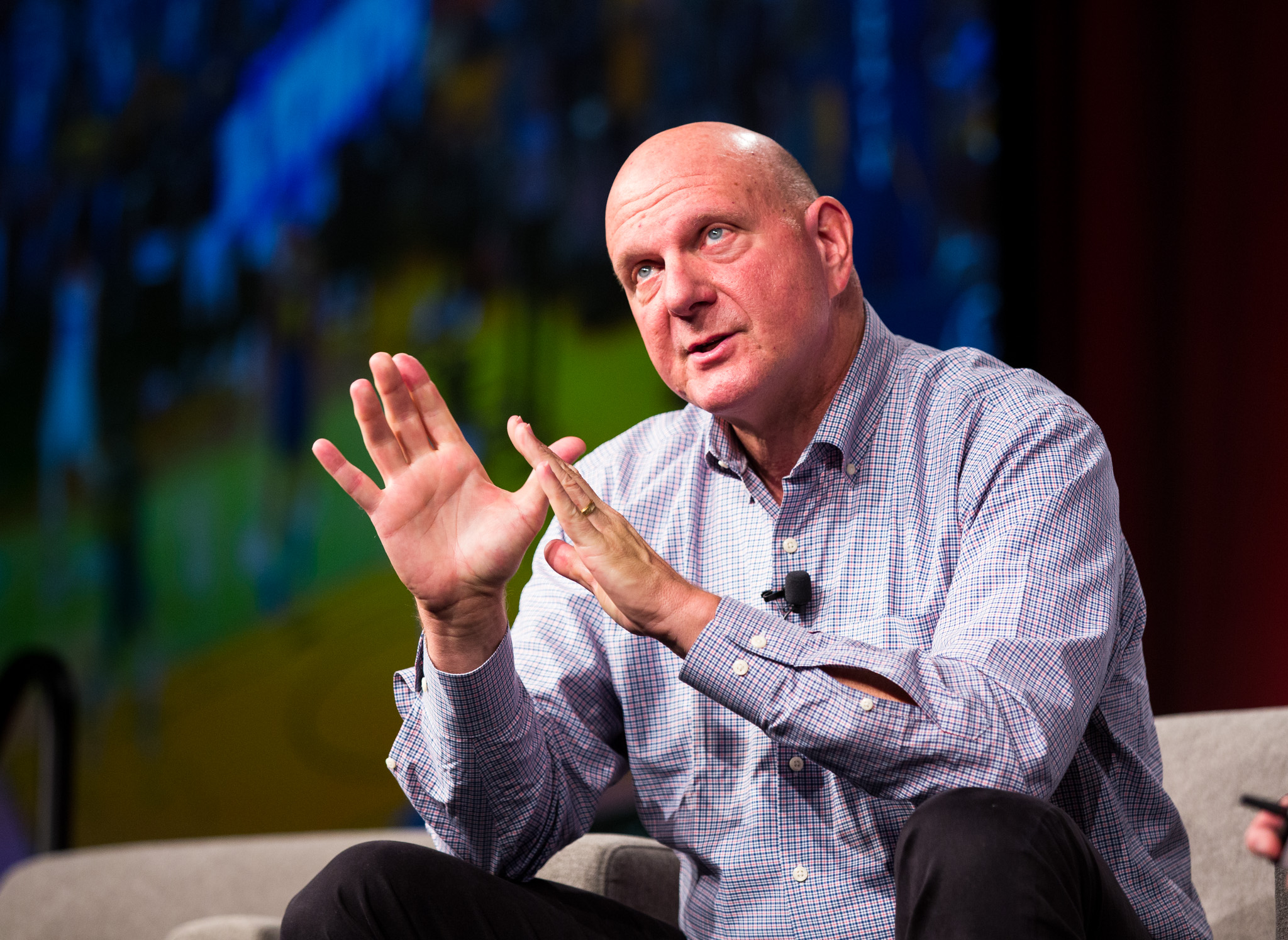 Former Microsoft CEO Steve Ballmer and former Windows President Steven Sinofsky met for a surprising conversation on Thursday evening when they appeared together in the conversation app Clubhouse by invitation only.

The two tech leaders, who weren’t exactly the friendliest breakup, joked and remembered as guests “The Good Time Show” hosted by the tech wife and husband team of Aarthi Ramamurthy and Sriram Krishnan.

Since it’s 2021, Ballmer had to be instructed to unmute at a certain time even though he wasn’t using a computer.

“One of the great things about Clubhouse, you don’t have to sit in front of the computer, you can talk on the phone, you can be relaxed,” said Ballmer. “Well, I’ve been in a hot tub for our entire clubhouse session … and I don’t know if you can hear the water splash, but I have to say it’s a pretty good way to have a discussion.”

Ballmer also shared a lot about his time at Microsoft, what he learned and what he’s working on as the owner of the Los Angeles Clippers NBA franchise, some key technical insights, and much more. Here are some highlights from the conversation, edited for length and clarity:

On the way to the meme

Sinofsky: “One of the things that just aren’t [at Micosoft] For a long time the two of us have been memes, and the idea that things we’ve done turn into memes. And so I still can’t live this clippy thing. It’s funny how embarrassing and humiliating it was and then really disappointing. And then suddenly it’s kind of cool. And I think what happened, a lot of the things you remembered happened that way. And so one of the ones I want to ask about because I know people want to hear about it is, ‘developer, developer, developer’. “

Krishnan: “Steve, you have to say the words.”

Ballmer: “You sound like a guy on an interrogation. ‘Say the words!’ “

Sinofsky: “I’ve been there. Just explain to people these meetings we’ve had and what it is like when you have to run 30, 40, 50,000 salespeople or employees once a year and get them going and that context is lost if you only see the stage. “

Ballmer: “There will always be questions about how you get mission-related organizations going. It is a difficult thing. It’s hard when you’re 20 or 30 people, but at least you can go into every office and talk about it. When you have around 300 or 400 people you need to have some idea of ​​how to do it and still think that on Friday you will have the regular weekly pizza event. But as you get bigger, you can write memos and communicate a lot. But you have to try to make things so simple that people get them into their heads. “Developers, developers, developers”, yes, people got it, we will only exist if we can get application support behind our platform. There was no question that the thing that established the PC was the work that developers were doing on the platform.

Sinofsky: “It is so fascinating to try to get people to understand the context of ‘I love this company’. It was all very real right now. It is exactly what you have to do for so many people. “

Ballmer: “Whether you’re doing a product launch or a sales meeting, you need to make sure you can instill understanding, trust, and excitement in your employees. I was not written. Sometimes I was actually on stage and a new act would come up and I blurted out – I don’t think that’s a bad thing. I think this is an honest and real thing. … It’s part of leadership and part of my techniques. Some of the speeches you can see online now look kind of silly out of context, as Steven said, but they had value at the time. “

On customers and the cloud

Sinofsky: “You gave this speech like 2010 or something, [saying] “We’re all in the cloud.” And customers and industry analysts were like what? No.”

Ballmer:You have to listen to your customers. But you also need to know enough about what your customers might need that they don’t already know. You could blow it up – you can give them something they’ll never need. But if you don’t think about which pain points they express – not just how to fix a pain point, but how to fundamentally repeat it – you will not get there. “

“For at least 15 years, I’ve been told by customers, ‘Microsoft will never be right for the company. ‘Okay, now it seems that Microsoft is well known as an enterprise company. Same thing in the cloud. It was clear that if we can take things to the cloud, you can reduce complexity, support standardization, lower labor costs, and attack new workloads.

“The company did a great job standing in front of it. I wish we had probably started Azure two years earlier. And we actually started with Platform as a Service instead of Infrastructure as a Service. Would probably do it a little differently. It took us a little time fighting AWS. “ 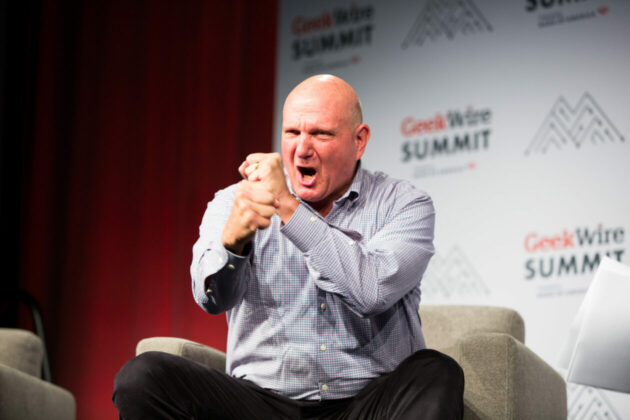 Steve Ballmer at the GeekWire Summit 2019 in Seattle. (Photo by Dan DeLong for GeekWire)

Ramamurthy: In the context of current tech companies, especially the big, super successful ones … how do you think they should or should they think about developing new products [keeping] existing customers happy? In your opinion, what compromises are you making?

Ballmer: “If you are a large company, you have to somehow avoid falling into this trap. Steven and me [had] lots of conversations: start a parallel team to do essentially the same thing and in different ways? Do you have a team responsible for developing the product for the next week? Build a product in three years? These are complicated things. But if you don’t, you will stop being a great company. If you see this as a question of ‘or’ instead of ‘and’, all you have to do is figure out the best way to use ‘and’. There are companies that are so well navigated. Apple navigated so well. They keep pushing their products, and to some extent I’m not going to say that they abandoned their customers because they didn’t. But you either make big jumps with them or you won’t be as happy as they would have you.

“If Microsoft hadn’t seen itself as a cloud company, Microsoft wouldn’t exist in the same form as it does today. IBM didn’t choose to see each other any particular way before. Amazon has decided to see itself as a full-service delivery company; it could also have only seen itself as a retailer. But the incredible effort and energy they put into this back-end distribution system is amazing. Should they compete effectively with UPS? Well no They said, “We will continue to see each other in different ways.”

“For large companies, the most likely thing to do is to trip yourself up. If Microsoft hadn’t seen itself as a cloud company, Microsoft wouldn’t exist in the same form as it does today. IBM didn’t choose to see each other any particular way before. Amazon has decided to see itself as a full-service delivery company. It could only have seen itself as a retailer. But the incredible effort and energy they put into this backend distribution system is amazing. And should they compete effectively with UPS? Well no They said, “Look, we’ll keep seeing each other in different ways.” 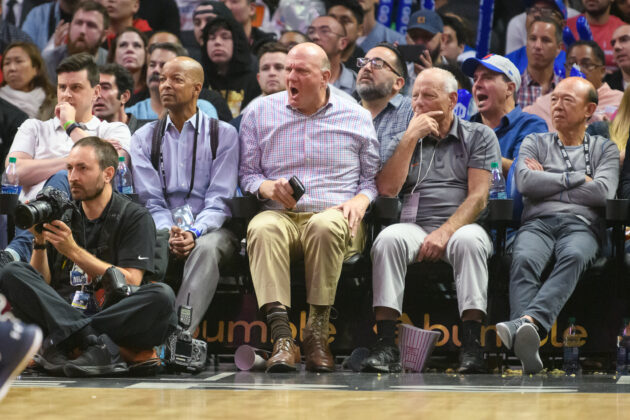 Steve Ballmer (center), owner of the Los Angeles Clippers, at a game at the Staples Center in 2018. (GeekWire Photo / Kevin Lisota)

Ballmer: “The NBA, the NBA’s business, was actually probably a little more complicated than I thought when I bought it [Los Angeles Clippers]. When you work in the software tech business, you essentially have an inexhaustible supply of your product, particularly old-fashioned software, but to some extent also today’s internet services. And with a basketball team, that’s not what you have. You have an inexhaustible supply of tickets that disappear at the end of each game. And if you haven’t sold one that’s like an airline, you never get any revenue.

You can see teamwork, you can see how people have to come together. There’s no time for random crap, you really have to be on the ground together and everyone can see it when you aren’t.

“How do you feel about this problem? Where does the money come from? Sponsorship is a whole different set of topics. Big Intellectual Property Licensor – I had no idea how to evaluate TV rights. So the business was more complicated, but the cool thing was, I learned so much from owning the Clippers that I would have become a better CEO of Microsoft than I could ever have imagined. And that’s not the business side. That’s the basketball side.

“What will they say in business? We are responsible, we are results driven, we are all about our results. In basketball, every game you win or lose is completely accountable. It’s gone. You can never restore it. Can’t say I’ll be back in sales next quarter. In fact, every 24 seconds you know whether you’ve won or lost. Did you shoot a basket Did the other one shoot a basket?

“People talk about accountability and transparency in business. Well, I don’t know anything about the Los Angeles Clippers that you can’t. You can see our team, you can read all the statistics, you can follow all the videos. You can read about matchups, you can watch the players. That kind of transparency, performance, and accountability … teamwork is a lot discussed in business. But [with basketball] You can see teamwork, you can see how people have to come together. There’s no time for random crap, you really have to be on the ground together and everyone can see it when you aren’t. I would say these were good lessons for me. “