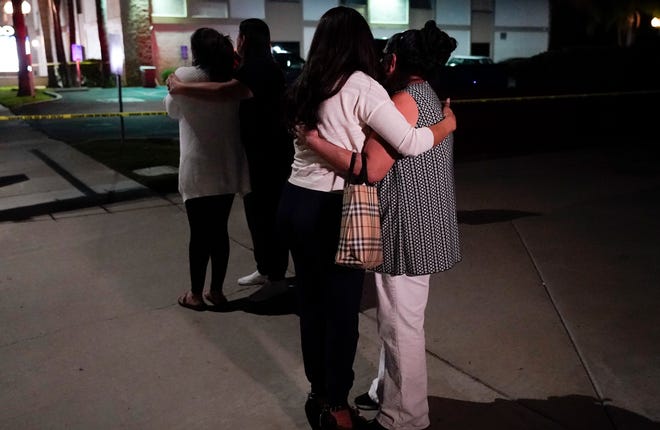 The estranged wife of a man suspected of killing four people during a rampage in Orange, California, said last week she was devastated – and fearful that her family was threatened.

“I don’t have the right words to describe the pain and horror this tragedy caused me,” wrote Aleyda Mendoza in a long text message to USA TODAY and other news outlets. “My heart is down.”

Aminadab Gaxiola Gonzalez, 44, was arrested after an exchange of fire with officials in the mobile home sales office that killed a 9-year-old boy and three others on Wednesday. Gaxiola, who was wounded in the exchange, is charged with murder and attempted murder.

The police have not identified a motive. Gaxiola’s indictment has been postponed from Friday to Monday pending an update on Gaxiola’s condition. He had been unconscious since the shooting and could not speak.

Mendoza wrote that she cannot accept what happened.

“I keep closing my eyes and praying to God, this is all just a bad dream and I’ll wake up soon,” she wrote.

Mendoza wrote that she has not had any contact with Gaxiola since they split up about two years ago.

“It hurts me even more to know my ex-husband was able to do such a terrible thing,” she said. “He has left a sea of ​​pain and grief for so many families who cannot find solace.”

The massacre is the latest in a series of mass shootings after a pause amid the COVID-19 pandemic. The carnage came a week after a gunman killed 10 people in a supermarket in Boulder, Colorado. The week before, a gunman killed eight people in three spas in the Atlanta area.

In California, police said Gaxiola lived in a motel and got to the office about 30 miles south of Los Angeles in a rental car. Before the attack, he locked the gates to the Unified Homes office suite. The officers answering heard gunshots and called a sergeant to bring bolt cutters.

“He took the bullets for her”: Dad mourns the 9-year-old son who was found dead in Mommy’s arms

The security video in the office showed the shooter wearing a headscarf over his face, armed with a semi-automatic pistol and carrying a backpack that authorities said contained pepper spray, handcuffs and ammunition.

The victims were identified as Luis Tovar, 50, who owned Unified Homes. Leticia Solis Guzman, 58; and Jenevieve Raygoza, 28, and her brother Matthew Farias, 9.

Matthew died in the arms of his mother, Blanca Tamayo, a Unified Homes worker who was shot but survived. Tamayo said Matthew usually goes to daycare after school, but he was with her on Wednesday afternoon. When the police arrived, Tamayo was rocking her dead son.

Tovar and Tamayo were Raygoza’s parents.

“In our wildest dreams, we never thought this could happen,” Alec Torres, a Unified Homes partner who was out of the office while filming, told the Los Angeles CBS subsidiary. “We were shocked to find out it was him. There was never any bad blood. “

Mendoza said she worked at Unified Homes for more than a decade and considers the owner and staff to be family.

“I learned everything I know there and they shaped who I am today,” she wrote. “They have always supported me and were there for me and my children whenever I needed them most.”

Mendoza said she had received threatening calls since the shooting. “Now my children and I fear for our lives.”