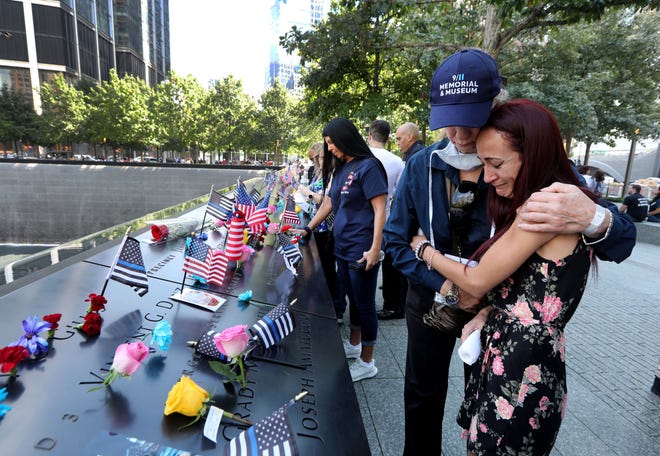 Once again, the living victims of the 9/11 attacks – the walking wounded who lost or survived friends and relatives and now wonder why – came back to what we once called Ground Zero. They mourned on a morning eerily similar to Tuesday in 2001 – a cloudless blue sky filled Lower Manhattan with bright light and the coolness of the coming fall.

This year, however, was different.

Yes, the bagpipers played “Amazing Grace”. Children who were not born on that bloody day read the names of uncles and aunts they had never met. Firefighters rang a silver bell to indicate the exact times that planes crashed, skyscrapers collapsed and smoke smeared a perfect azure sky.

But the pain seemed deeper now.

Trying to measure grief is never easy. Was the first anniversary of September 11th, when mourners laid flowers in an excavation pit, worse than the fifth? Or the 10th? Or the 15th?

But 20 years is a benchmark. A generation has been born since the 9/11 attacks. Five presidential elections have taken place. America has fought its longest war. It is now battling its worst pandemic in more than a century, and is faced with the feeling that our people are more divided and more hateful than they have been since the civil war.

Twenty years ago, Greg Packer, then a highway foreman from Huntington, Long Island, rushed to the smoldering ruins of the World Trade Center in Lower Manhattan. His goal: to help wherever he can.

He found himself distributing water and meals to firefighters, police officers, and construction workers who scrambled over the bent steel and crumbled concrete to find survivors or recover bodies.

What Packer found was a sense of unity he had never felt in his nation before.

“It’s 20 years later and I have to be here to remember and never forget,” said Packer on Saturday as he stood on Greenwich Street one block from the 9/11 Memorial Plaza and its majestic oak trees and soothing waterfalls and names of the dead removed.

More:On the 20th Anniversary of 9/11 America honors the memory of the lost: “We Remember”

The feeling of disagreement – and its shocking contrast to the united spirit of America in the weeks following the 9/11 attacks – was a theme of the commemorations on Saturday.

Vice President Kamala Harris called on Americans to come together.

“If we as Americans do the hard work of working together, if we stay united in the goal, we will be prepared for whatever comes next,” she said.

President Joe Biden made a similar case for unity on Friday evening. Former President George W. Bush also said in Shanksville that he was “proud to lead an amazing, resilient, united people after the attacks of September 11, 2001”.

“When it comes to American unity,” Bush said, “these days seem far from ours.”

Former Presidents Barack Obama and Bill Clinton stood with Biden at the service in Manhattan. Biden then stopped in Shanksville and the Pentagon. 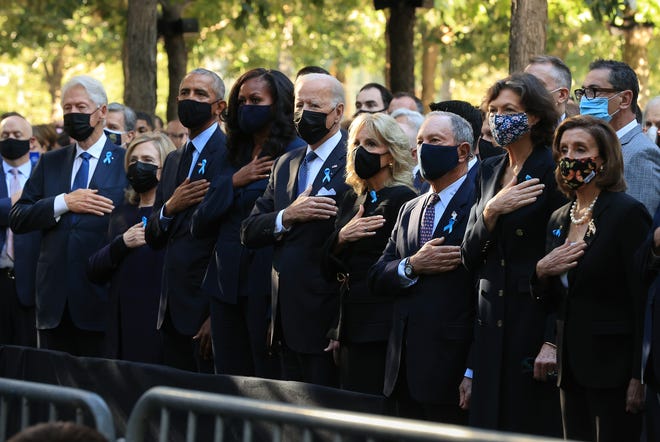 Former President Donald Trump did not attend any of the 11th commemoration ceremonies.

Tears welled up in the eyes of Tony-winning Broadway actress Kelli O’Hara as she sang an emotional rendition of “You’ll Never Walk Alone” between the name readings of the dead at 9/11 Memorial Plaza in Lower Manhattan. Moments earlier, Bruce Springsteen seemed to choke slightly as he began his own anthem of sorrow and death, “I’ll See You In My Dreams”.

In the crowd of several thousand mourners, Patrick Swift of Jersey City took off his newspaper cap while listening to Springsteen.

But on Saturday, in a blue t-shirt with his brother’s name and the slogan “We’ll never forget,” tears rolled down his cheeks as he remembered his brother, an aspiring manager at Morgan Stanley who was 70 years old South tower.

Tom Swift’s colleagues escaped by taking the stairs. Swift jumped into an elevator and was never seen again.

“My brother knew every word of every Springsteen song,” said Patrick Swift as he put his right arm around his wife Evonne’s shoulder.

“I will see you in my dreams.

We will meet again and live and love.

I will see you in my dreams.

Yes, up around the bend in the river.

Because death is not the end. “

When Springsteen finished, Patrick looked up at the sky and smiled.

Patrick’s nephew Peter read the names of the dead from the stage next to the stage where Springsteen was playing. When he finished his list of the dead, Peter, who was not born when the 9/11 attacks occurred, mentioned Tom Swift and added, “I can’t wait to meet you.”

“There is a God,” said Patrick.

Those were the little moments of consolation. Maybe it was just a humorous memory as a relative read names. Perhaps it was a hand-made sign with family photos that the elderly father carried of Danielle Kousoulis, a vice president of the Cantor Fitzgerald investment firm, who was killed in the collapse of the North Tower. Or maybe it was the sign and t-shirt worn by the mother of George Cain, a firefighter who died trying to rescue officers in the Trade Center.

“Those 20 years felt both a long and a short time,” said Mike Low as he remembered his daughter Sara Elizabeth, a flight attendant who died when American Airlines Flight 111 crashed into the North Tower. “When we recite the names of those we have lost, my memory goes back to that terrible day when it felt like an evil ghost had come over our world, but it was also a time when many people passed acted beyond the ordinary. “

As he walked the streets near Memorial Plaza, Tony Hammond, 66, of Louisville, Kentucky, pondered how the 9/11 pain had actually become a unifying balm for some.

“You speak of six degrees of separation,” said Hammond, first coming to the memorial. “But I don’t think there is that much separation for the people who come to this event.”

For at least a day America caught a glimpse of how 9/11 brought us together.

But, like all other anniversaries of the nation’s deadliest terrorist attack, that pain is deeply painful.

Cliff Schlosser, now 57 and battalion chief of the Rahway, New Jersey Fire Department, rushed to the World Trade Center just hours after the attacks. Then he kept going back and working 12-hour shifts to rescue the dead.

He came back on Saturday – as always in previous years.

And the old pain returned.

Mike Kelly is an award-winning columnist for NorthJersey.com, part of the USA TODAY Network. Contact Kelly on Twitter at @mikekellycolumn.