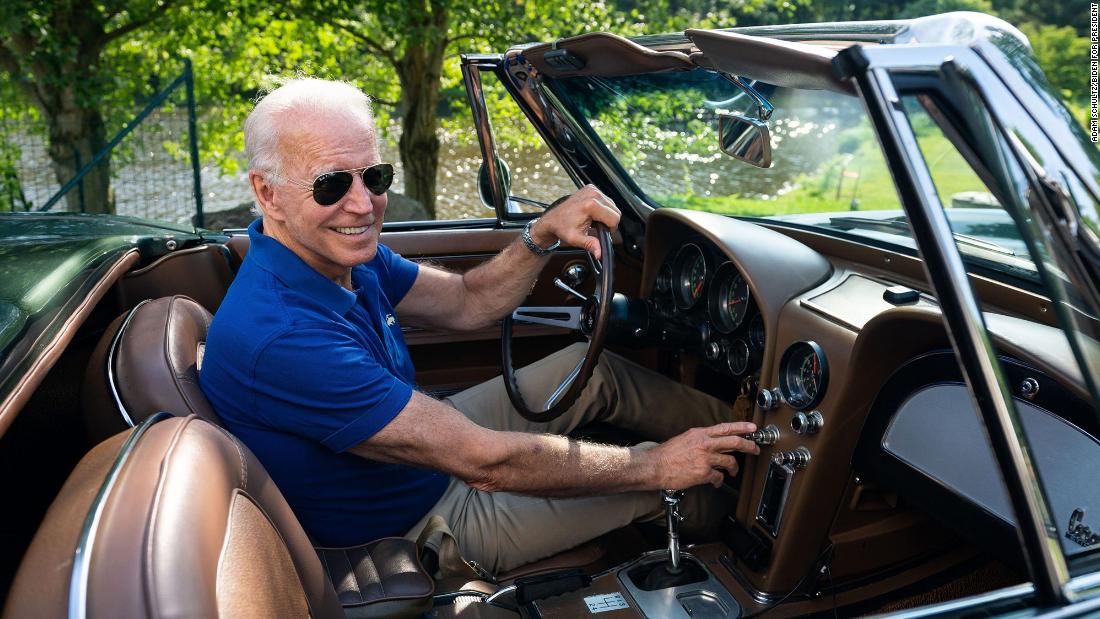 From the moment Joe Biden steps outside of the armored presidential limousine known as “The Beast,” countless cameras document the President’s every move. But only one photographer can sit across from Biden inside of the car and capture him in his quiet, unguarded moments.

Adam Schultz, the new chief official White House photographer, is in the Oval Office, aboard Air Force One and in the Situation Room. He’s with the President for high-level meetings, but also when Biden pets his two German shepherds or throws a log on the fire in the Oval Office.

Biden poses with his dogs, Champ and Major, while in the Oval Office. (Adam Schultz/The White House)

Schultz is not only documenting the Biden White House for history but also helping to shape its narrative in real time. While news photographers may capture and publish an awkward moment or expose private notes accidentally left visible, the White House communications team uses Schultz’s photos as part of their messaging.

Every picture he takes will eventually end up at the National Archives, but millions will see the photos the moment they are posted to social media.

“Even though he is the President, he still is a very real person. He’s a normal person,” Schultz told CNN. “If a fire needs an extra log, he’s going to throw a log on it.”

Schultz has a good rapport with Biden. Over the summer, outside of Biden’s home in Wilmington, Delaware, Schultz snapped a photo of the then-candidate smiling in his beloved 1967 Corvette Stingray.

“It was just him talking about his car — and I’m a car nut myself. I was a mechanic in college and that’s how I supported myself. It was nice to hear his take on this very special muscle car,” Schultz said.

Biden sits in his 1967 Corvette Stingray while shooting a campaign video in July. (Adam Schultz/Biden for President)

While Biden has shown an interest in his official photographs, he is not as deeply involved in the process as President Donald Trump was.

“He likes to control the lighting, the production, and the show basically,” Craighead said. Many times, Trump himself would choose what photo the White House released.

Members of the media watch President Donald Trump hold a video teleconference with US troops on Christmas Eve in 2017. (Shealah Craighead/The White House)

Every day, Craighead would hand Trump a folder of images — they called it the “daily folder,” she said — and she and the President would have a conversation about what he liked and didn’t like. Trump would give “pretty direct” feedback, she said.

“Sometimes he liked it to be a little warmer with orange tones, then he would decide he didn’t like that,” Craighead said.

Trump, who has years of experience on television, preferred to pose for the camera and wasn’t always comfortable with natural and candid shots, according to Craighead.

Trump holds a Bible outside St. John’s Episcopal Church during a photo op in Washington, DC, in June. Police had just forcibly cleared protesters from the block. Part of the church had been set on fire the night before. (Shealah Craighead/The White House)

Craighead, unlike Schultz, only met Trump the day before he took his oath of office. She received a call from then-press secretary Sean Spicer days before Trump’s swearing-in asking her if she would photograph the inauguration. The other photographer they had lined up for the event hadn’t passed vetting, Spicer told her.

She described navigating the competing interests in the Trump White House, and the challenges posed if the President, first lady, vice president and second lady were all at an event and in the same photos and wanted to push something out on social media.

“Everybody has their own interest in what the initiative or the wording or messaging should be,” Craighead said. She said they would have to follow the “hierarchy of messaging.”

Biden speaks in the rain during a drive-in campaign rally in Tampa, Florida, in October. (Adam Schultz/Biden for President)

Craighead also said she hired someone who had experience taking pictures of models and a background in the fashion industry to be Melania Trump’s photographer. The former first lady and her photographer “worked extensively together,” she said.

Biden looks through the official photos every once in a while, Schultz said, but does not stage-manage them.

The Bidens walk past Valentine’s Day hearts on the North Lawn of the White House. (Adam Schultz/The White House)

At one point during the campaign, Schultz was editing photos on the campaign plane when Biden came over. Schultz showed him a striking photo of Biden getting ready to take the stage with a big American flag behind him.

“He starts flipping through them and I’m like, uh-oh,” Schultz said with a laugh. “I told him these are not the completely polished, final images.” But Biden liked them and asked Schultz to send a few to him. Shortly after, the team put a shortcut to the Flickr galleries on Biden’s phone.

Schultz was the only photographer on staff for the Biden campaign during the primaries, which meant long nights editing photos. He was there when the campaign was lagging in the polls, was strapped for cash and had suffered tough losses in Iowa and New Hampshire.

Biden poses for a selfie at a campaign event in Detroit in March 2020. (Adam Schultz/Biden for President)

Biden works the grill at the Polk County Steak Fry in Des Moines, Iowa, in September 2019. (Adam Schultz/Biden for President)

US Rep. Jim Clyburn, left, officially endorsed Biden in February 2020. Biden went on to win the primary in Clyburn’s home state of South Carolina. It was Biden’s first primary win of the campaign. (Adam Schultz/Biden for President)

Biden speaks with people in Lancaster, Pennsylvania, about the Affordable Care Act in June. (Adam Schultz/Biden for President)

Souza told CNN that official White House images give the world “a window into the inner workings of the presidency, but also help reveal the president’s character.”

Souza took 1.9 million photographs in the eight years Obama was president. He spent more time with Obama than most, and was one of the few in the room with him for all of the highs and lows of his presidency.

“Every emotion that he had as president I was in the room for, so there’s sort of a bond between us because of that,” Souza said.

President Barack Obama bends over so the son of a White House staff member can pat his head during a family visit to the Oval Office in 2009. The youngster wanted to see if the President’s hair felt like his own. (Pete Souza/The White House)

Souza is perhaps the most well-known chief White House photographer, and he became a bit of a pop culture phenomenon when he started trolling Trump on Instagram. Souza would share photos from the Obama era and write captions that read as sly commentary on Trump. His account now has 2.8 million followers and his most recent book, “Shade: A Tale of Two Presidents,” continued what he started on Instagram.

The traveling content director at the White House, Olivia Raisner, praised Schultz’s ability to “tell a story with his photographs, whether it’s the story of a single event in the back of a high school gym in Dubuque, or the story of the week of the Democratic National Convention.”

Jill Biden looks over her notes during the Democratic National Convention. She spoke from her former classroom at Brandywine High School in Wilmington, Delaware. (Adam Schultz/Biden for President)

“If we had it our way, voters and viewers would be in the room with us,” Raisner said. “They would be at our campaign events, they would be in the Oval Office as President Biden is talking to various leaders, but they can’t be, so we have to communicate that through videos and photos.”

Raisner, who worked closely with Schultz throughout the campaign, praised his talent as well as the enthusiasm he brings to his work, which she says rubs off on his colleagues.

“Adam has the trust and the respect of President Biden, so he’s able to be there in those moments capturing the historical and also the mundane,” Raisner said.

Biden gets ice cream at an Iowa Dairy Queen in 2019. (Adam Schultz/Biden for President)

Schultz, whose formal photography training consists of a couple of classes he took in high school and college, says he has benefitted from working with and learning from other White House photographers.

Biden greets US Sen. Kamala Harris during a “Get Out the Vote” event at a Detroit high school in March 2020. Harris had dropped out of the presidential race a few months earlier. (Adam Schultz/Biden for President)

Biden calls Harris in August to inform her that she was his choice as a running mate. (Adam Schultz/Biden for President)

Biden meets with children during a campaign event at a church in New Hampshire in February 2020. (Adam Schultz/Biden for President)

During a 9/11 memorial event, Biden gives a rose to Maria Fisher, who lost her son Andrew in the attack on the World Trade Center. (Adam Schultz/Biden for President)

Everyone has advice for him. All of the White House photographers he’s talked to — from both Republican and Democratic administrations — have stressed that he shouldn’t approach the role with politics in mind. His primary focus is documenting the presidency for history, they’ve told him. Schultz agrees.

“It’s about documenting what this person is doing,” Schultz said. “It doesn’t matter if they’re Republican or Democrat.”

The Bidens, seen on the right, are joined by their family as they watch fireworks from the White House balcony on the night of the inauguration. (Adam Schultz/The White House)