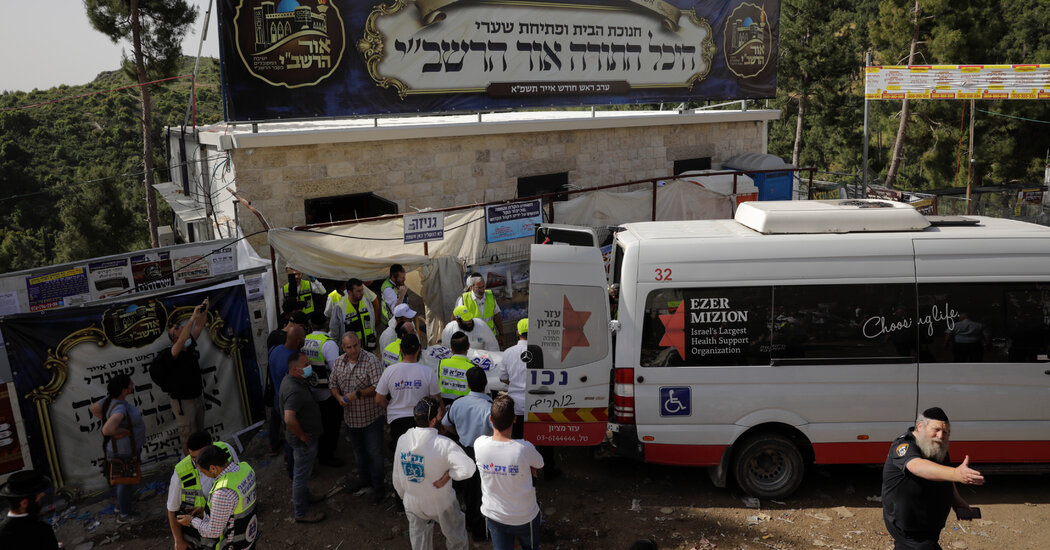 JERUSALEM – As the Israelis mourned the 45 people who were trampled to death during a pilgrimage attended by tens of thousands of ultra-Orthodox Jews on Friday, questions arose about poor planning and possible negligence.

For more than a decade there have been concerns and warnings that the religious site on Mount Meron in northern Israel was not equipped to accommodate tens of thousands of pilgrims. In 2008 and 2011, reports from the then state auditor warned of potential disasters.

“We will conduct a thorough, serious and thorough investigation to ensure that such a disaster does not occur again,” Prime Minister Benjamin Netanyahu promised a visit on Friday. He called for a national day of mourning on Sunday.

Even for a country accustomed to the trauma of war and terrorist attacks, this was considered one of the worst disasters in Israeli history.

Israel was plagued by secular religious tensions, especially last year during the pandemic, amid widespread anger over what many here viewed as disregard for regulation and autonomy by parts of the ultra-Orthodox community. The early Friday disaster largely united the country in shock and grief, but it also underscored some of the divisions that plagued that society.

Up to 100,000 people were pushed up the mountain late Thursday, most of them arriving in organized buses to celebrate the holidays. The festivities grew to horror about an hour after midnight when dozens of adults and children were knocked down and suffocated in a crowded, narrow passageway that witnessed witnessed was turning into a death trap.

The rush came after the celebrants poured down a few steps from a section of mountainous terrain into the passageway, which had a sloping metal floor. Some people at the front fainted or slipped, creating a bottleneck, gave witnesses and set off what witnesses called a “human avalanche”.

One of the injured, Chaim Vertheimer, said the passage was slippery due to spilled water and grape juice.

“For some reason there was sudden pressure at that point and people stopped. But more and more people came down, ”Vertheimer told the Hebrew news site Ynet, speaking from his hospital bed. “People weren’t breathing. I remember hundreds of people screaming, “I can’t breathe.”

Another of the injured, Dvir Cohen, said large numbers of people tried to leave immediately.

“There was a flight of stairs where the first people stumbled and they all trampled on. I was in the second row, ”he said. “People trampled me, hundreds of them.”

Minutes earlier, thousands of men had been rocking and rocking in the stands in time for the music. The Israeli authorities had not restricted the number of participants, although some health officials had warned of the risk of transmitting Covid-19.

While the sight of so many people gathered and exposed may be unsettling for most of the world, life in Israel has almost returned to normal in recent weeks after a successful national vaccination campaign.

The majority of the adult population is fully vaccinated. But many in the crowd were under 16 and had not yet been vaccinated.

It was the largest single gathering in Israel since the pandemic began.

By Friday afternoon, many of the dead had been identified and families rushed to bury them before the sunset began on the Sabbath. According to Israeli news media, at least two of the victims were from the United States and one from Canada.

The site at Mount Meron includes several large assembly areas with grandstands and stages that are connected by a series of alleys and paths.

The 2008 auditor’s report states that all additions and changes to the building made at the pilgrimage site were made without the approval of local and regional planning and construction committees.

“There is no reason to continue the current situation,” said an auditor’s report.

The controller’s office said the access roads and paths presented a particular hazard, which “are narrow and unsuitable to accommodate the hundreds of thousands of people who visit the site”. In one of these ways, witnesses said the rush of people had begun.

Mount Meron is close to the Sea of ​​Galilee and the mystical city of Safed. The annual meeting there takes place on a public holiday, Lag b’Omer, which in Jewish tradition is associated with the revolt of the Bar Kokhba against the Romans in the second century AD and is a highlight of the Hebrew calendar for many ultra-Orthodox Jews.

But the celebrations were severely restricted last year because of the pandemic, and few people were allowed to attend.

A large number of ultra-orthodox and traditional Jews make pilgrimages to the mountain for days. They light campfires around the grave site of a second-century sage, Rabbi Shimon Bar Yochai, in hopes that they will receive his blessing on the anniversary of his death.

Despite warnings that the infrastructure could not safely support large crowds, a former official, Shlomo Levy, who chaired the Upper Galilee Regional Council, said he had come under political pressure to overturn a 2008 arrest warrant issued to close the grave site for security reasons.

Mr. Levy told Kan, Israel’s public radio station, that the then Minister of Public Security told him he was afraid to touch the website and that it was a “hot potato”.

This caution stems from the disproportionate political power that ultra-Orthodox parties have long held in the Israeli coalition system. The ultra-Orthodox were key members of successive Netanyahu-led government coalitions.

Yossi Elituv, editor of the ultra-Orthodox Mishpacha magazine, said on Twitter that the ultra-Orthodox community “needs to learn some lessons”. The site was to be taken out of the hands of private religious trusts and associations and operated by official government agencies.

Relations between the ultra-Orthodox community and the Israeli mainstream were particularly strained during the pandemic, as parts of the religious public violated the lockdown regulations and the government and police often only weakly enforce them.

But in a national unity demonstration Friday, Israelis lined up across the country to donate blood for the injured in response to a call from emergency services.