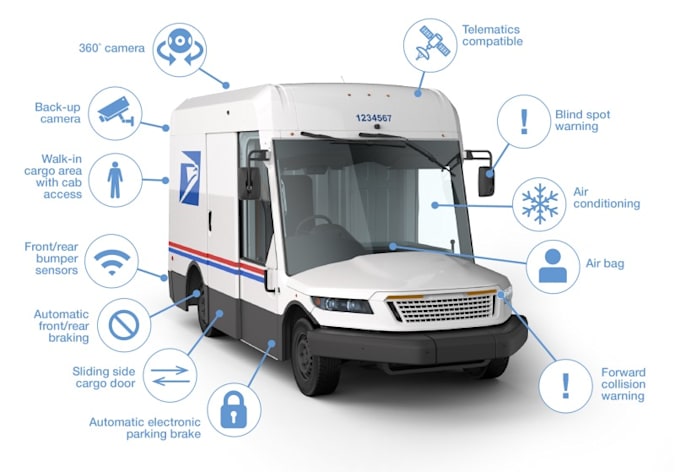 The U.S. Postal Service plans to have a new mail van on American roads by 2023. With a new contract, Oshkosh Defense will manufacture between 50,000 and 165,000 “Next Generation Delivery Vehicles” for the agency over the next 10 years. The vehicle is offered in both combustion and electric drive variants. According to the postal service, the latter will be able to adopt new EV technologies as they become available.

These include functions such as 360-degree cameras, front and rear collision avoidance and traction control, as well as convenience such as heating and air conditioning and more load-bearing capacity for parcels.

The postal service’s current fleet consists of around 230,000 vehicles, of which around 190,000 are intended solely for the transport of mail and parcels to people. Some of these vans and trucks, like the legendary Grumman Long Life Vehicle (LLV), have been in use for decades. The US Postal Service has approximately 140,000 LLVs in the US. Most of these vans are equipped with GM’s infamous 4-cylinder “Iron Duke” engine, and on a given day fuel consumption will drop in the single digits. In recent years, they have also started catching fire without getting caught in an accident. In other words, the postal service is long overdue to upgrade.