British online giant Asos took over Topshop and related brands in February and given millennial-oriented brands a new home, as this graphic on its website shows. Nordstrom has just taken a minority stake in the brands as part of a deal with Asos.

Nordstrom has acquired a minority stake in fashion brands Topshop, Topman, Miss Selfridge and HIIT under an agreement with UK online giant Asos.

The investment is due to be announced on Monday morning, according to a report in the New York Times on Sunday, citing an interview with Nordstrom President Pete Nordstrom. It is part of a broader move by the retailer to make their physical and online stores more seamlessly working together, a trend accelerated by the pandemic.

Nordstrom has been committed to competing more effectively with companies like Amazon and others in e-commerce and traditional stores for several years.

“We couldn’t have found a better partner in Asos, the world leader in the fashion industry for the 20 year old client, and we are delighted to be working with them to redesign the wholesale / retail partnership,” said Pete Nordstrom, quoted in a statement from Footwear News in an article on Sunday night.

Industry publication WWD described the deal as unusual, noting that “Nordstrom has not invested in market brands it sells in its stores and online”. Nordstrom confirmed to WWD that the deal is the first of its kind.

Financial conditions were not yet known by Sunday evening.

Asos acquired the brands in February for $ 364 million. The deal did not include any of the brands’ 70 physical retail stores, the Guardian reported. 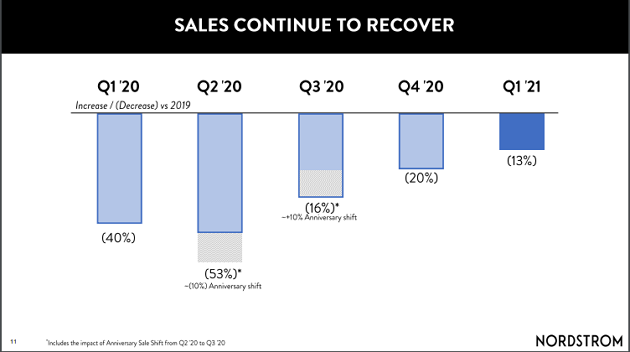 Nordstrom’s revenue, still below previous years, has recovered from the pandemic, as seen in this graph from the company’s earnings report for the first quarter.

Like other retailers who rely on physical stores, Nordstrom has been hit by the COVID-19 pandemic. On net sales of $ 10.3 billion, the company posted a loss of $ 690 million for the year ended January 30, compared to a profit of $ 496 million on net sales of $ 15.1 billion. Dollars last year.

But as a sign of the rapidly changing landscape, Nordstrom said digital transactions accounted for 54% of total revenue last year, up from 34% last year.

For the first quarter that ended May 25, the company’s net loss was $ 166 million, an improvement over the loss of $ 521 million as the pandemic hit the economy in the same quarter last year. Digital revenue grew 23% in the first quarter.