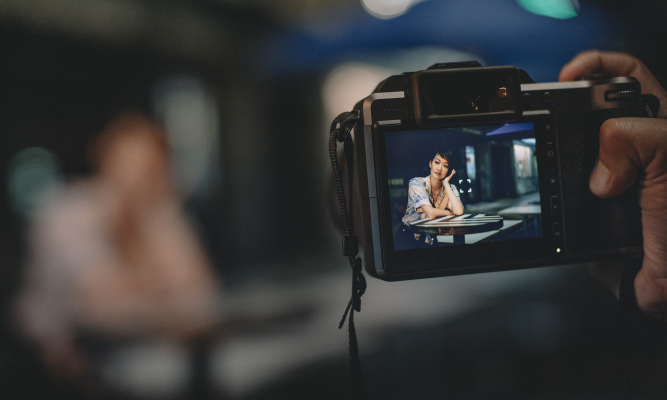 We crawled in An abandoned school bus that drove through shabby corridors avoided fleeting thunderstorms and wandered the empty streets of Chinatown until late at night. I couldn’t have been happier for two weeks of summer.

New York City was closed. I had been quarantined in my dirty apartment, discouraged and restless. I really wanted to do something creative. Fortunately, the Hasselblad X1D II 50C arrived for review, along with studio heads approval for socially distant outdoor photography.

Taking pictures of the everyday (flowers, buildings, etc.) would have been a disservice for a $ 10,000 camera kit. Instead, my friends and I collaborated on a fun little project: we shot portraits inspired by our favorite films.

Equipped with masks and a bottle of hand sanitizer, we put the X1D II 50C and 80mm f / 1.9 lenses (great for close-ups without actually having to take close-ups) to the acid test in some of the lesser-known areas of NYC.

Before I get into trouble on the last photo – Alex and Jason are professional stuntmen and this is a rubber gun. They reenacted the penultimate scene from Infernal Affairs – a brilliant piece of Hong Kong cinema (much better than the Scorsese remake).

While the camera is a bit more accessible in terms of cost and usability with a few upgrades (bigger, more responsive rear screen, cleaner menu, tethering features, faster startup time, and shutter release), the X1D II is essentially the same as its predecessor. So I skipped the standard rating.

What it is, what it is not

The most common complaints about the X1D were slow autofocus, slow shutter release, and short battery life. The X1D II has improved these features, if not significantly. Rather than seeing the delay as an obstacle, I had to slow down and rewire my brain for a more thoughtful style of shooting (a pleasant side effect).

As I mentioned in my X1D review, Apple and other smartphone manufacturers have made taking great pictures effortless. As such, accessibility has created a culture where everyday banalities are overly captured. You shoot way more than you will ever need. I’m guilty of that. Pretty sure 90% of the pictures on my iPhone camera roll are disposable. (The other 10% is from my dog, and he’s spectacularly photogenic.)

The X1D II isn’t a simple camera, however. It’s frustrating at times. If you’re a beginner you may need to learn the basics (ISO, f-stops, when to click the shutter) but the payout is worth it. There is an overwhelming sense of satisfaction when you get that one shot. And at 50 megapixels, it’s full of detail and deserves to be hung on your wall. Spending a ton of dollars on the X1D II won’t make you a better photographer in an instant, but it should encourage you to become one.

Without the invented studio lights and the stage set, our outdoor shots became an improvisational exercise: wWe wandered through the neighborhoods and found internships (street lamps, neon lights … the sun), discovered places and switched places when things didn’t work out.

We explored, we had a purpose.

My takeaway from the two weeks with this camera: Take a break and be meaningful in your actions.