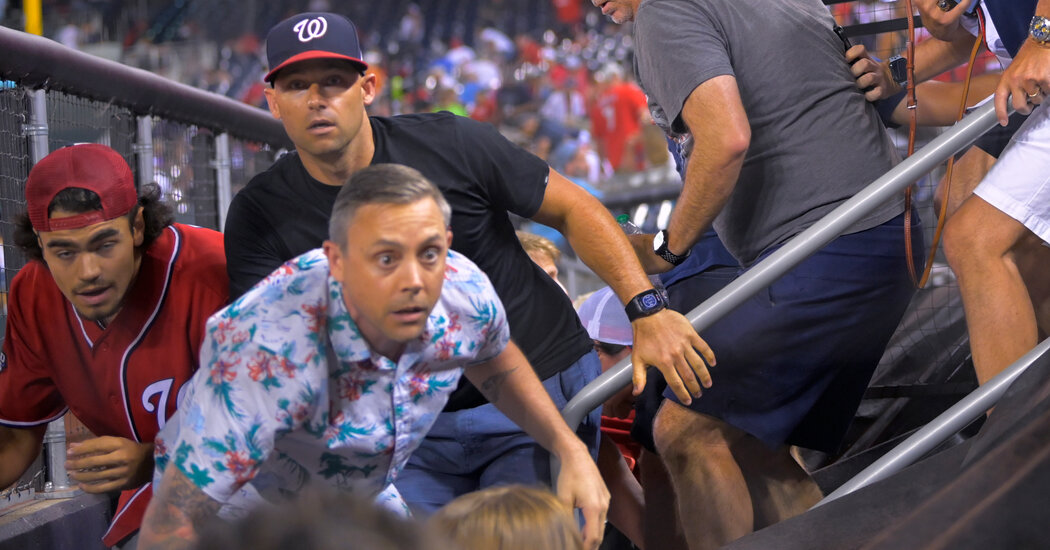 Jacob DeAngeles, 25, said he was sitting with his girlfriend and friend in Section 106 near the Foul Pole on the left side of the field when people started running up the stairs and he heard someone yell, “Active shooter.”

“At first we thought it was in the stadium,” he said. “It was instant panic.”

Some people crouched under their seats while Mr. DeAngeles said he jumped over the turnstiles with his boyfriend and girlfriend and then came out onto the street and home when police cars rolled into the compound.

“It’s just wild,” he said. “You don’t think you will have this experience, but you hear ‘active shooter’ and just run.”

Nick Butler, 28, said he sat in the stands behind midfield watching the weather and wondering if the game would be rainy. When he saw fans sprinting behind the homeplate, he assumed it was raining, but then noticed that some were crouching and the players weren’t in the shelters.

Mr. Butler said he jumped from his seat and looked for an exit to the midfield hall, turned a corner and said from a member of staff that he could not leave this route. Then he saw “a rush of people running our way”.

It was then that he realized that “something was happening here,” he said.

He said he turned around, ran, and found his way into what he called the Nationals Operations Center, where he ducked under tables and waited for a public announcement to make it clear that fans could leave.

“I am comforted in a way that we were never really in danger,” he said.

After fans poured out of the ballpark, the subway platform at Navy Yard station was crowded, as it usually is after a game, but fans were quieter than usual and many people shared their memories of what they did had heard.

The coverage was contributed by Amy Fiscus, Austin Ramzy and David Waldstein.