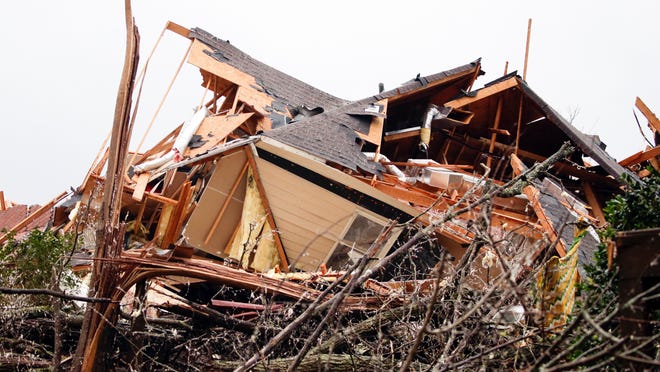 While people in parts of the south are trying to pick up parts of a second round of storms in two weeks that hit Thursday, a third wave of storms is predicted this weekend.

Heavy rain, hail and wind are expected from central Illinois to parts of Louisiana, Mississippi and Alabama on Saturday afternoon and into the evening According to the National Weather Service, flash floods are also expected.

Areas in Arkansas, Mississippi and Tennessee are also at risk from tornadoes, the NWS Storm Prediction Center reported.

“Rainfall of 1 to 3 inches combined with saturated soils could cause rapid rises in rivers and streams in parts of the Mid South and Tennessee Valley,” warned the National Weather Service.

“Airplanes torn apart like toys”: Storm in the south leaves 5 dead in Alabama, 1 in Georgia

In the Midwest, East Missouri, and Illinois, you can expect isolated storms late on Saturday afternoon. The expected rain, hail and wind will move to Indiana in the evening.

Rain and thunderstorms will also be seen late into the night in parts of Arizona and New Mexico as well as north and south Dakota and the upper Midwest.

According to AccuWeather, the storms will shift eastwards to the southeastern and mid-Atlantic states on Sunday, and another round of rain is forecast for the south early next week.

Three of the five victims in Calhoun County, Alabama, were family members who died in a timber frame house in Ohatchee, a small town in eastern Alabama, after an apparent tornado hit around 3 p.m. Thursday, the Calhoun County coroner said.

Another man was killed in an Ohatchee RV. The fifth victim, a woman, died in a motor home in Wellington, Alabama.

In Centerville, Mississippi, a woman was killed after a tree knocked over by high winds fell on her mobile home Wednesday night, according to Wilkinson County’s emergency management department.

There have been several reports of destroyed homes and churches and tens of thousands of people without electricity.