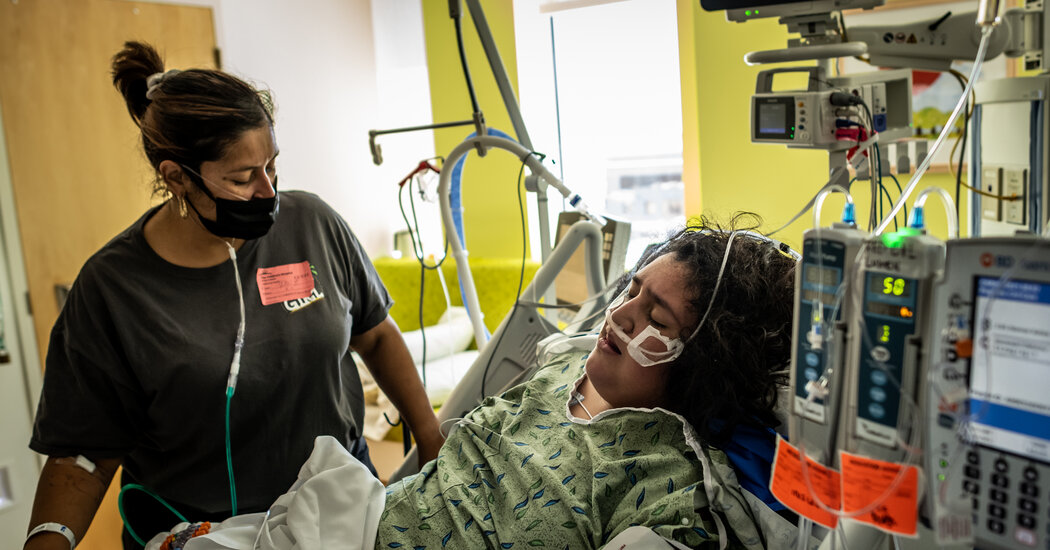 Dr. Abhishek Patel, who works in the hospital’s pediatric intensive care unit, walked in and out of a room where a 6-month-old and a 2-month-old child were battling severe Covid-19 infections and breathing with the help of supplemental oxygen. This week alone, he said, two teenagers with other underlying health problems succumbed to the virus.

In a nearby room, Cerena Gonzales, 14, groaned in pain. Last week she was an excited teen looking forward to starting her first year of high school. On Tuesday she was surrounded by hospital equipment. She and her younger sister fell ill after their parents Carlos Gonzales, 47, and his wife Elizabeth, 42, suffered from symptoms of Covid and were rushed to the hospital. Neither of them had been vaccinated, Ms. Gonzales said.

“We hesitated,” said Ms. Gonzales. “We were all a healthy family”

As soon as she was released, Ms. Gonzales, who was still breathing with the help of two portable oxygen cylinders, rushed to her daughter’s side. She stroked her daughter’s forehead and tried to keep her happy. She tearfully recalled the harrowing scene days ago when doctors put her on a speakerphone so she could hear her daughter being intubated. “I thought I was going to lose my mind,” said Ms. Gonzales. “I couldn’t be with her.”

On Tuesday afternoon, Ms. Gonzales said she believed the worst of the crisis was over. She untangled her daughter’s thick black hair from IV tubes and gently encouraged her to drink orange juice.

Several members of her family have been hit by the virus, she said, and she is now planning to organize a family trip to get vaccinated. “There’s no reason parents should go through this,” she said.

Nearby, Anne Marie Baker, a pediatric nurse, had the grim task of cleaning a room where a teenager had recently died of the virus. Mrs. Baker took off her mask and dropped into a chair to catch her breath. Children under the age of 12 who have not yet qualified for a vaccine are at greatest risk, she said.

“We’ve only had all of these patients in the last two months,” she said. “It’s just so sad.”