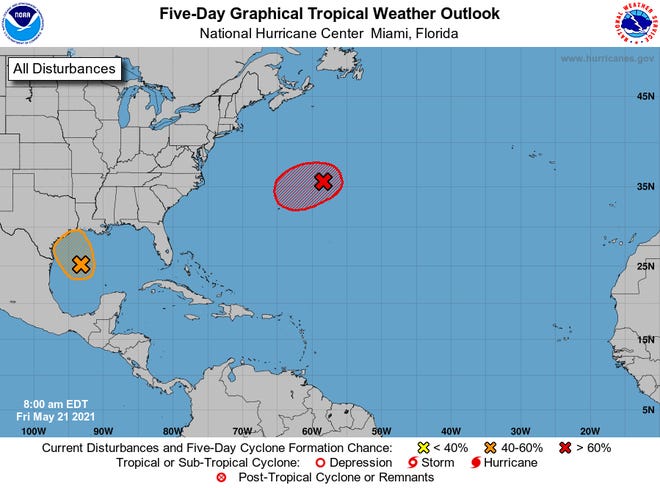 The 2021 tropical storm and hurricane season, which officially doesn’t start until June 1st, seems to be jumping again.

The National Hurricane Center monitors two separate areas for possible tropical development, one in the Gulf of Mexico and the other in the Atlantic Ocean east of Bermuda.

In the Gulf, forecasters said a short-lived tropical depression or storm could form before the system moves inland Friday night. Regardless of development, the system could generate heavy rainfall over the weekend over parts of already soaked Southeast Texas and Southwest Louisiana, the Hurricane Center said.

In areas near the coast of southeast Texas and southwest Louisiana, several extra inches of rain could fall in areas that have already seen nearly eight inches of rain, AccuWeather said.

Even after the Gulf disruption shifted inland Friday night, the downpours can continue through Saturday and likely focus on the areas that have been doused repeatedly this week, AccuWeather forecasters said.

Meanwhile, a separate system in the Atlantic about 450 miles east-northeast of Bermuda has a 90% chance of development over the next two days. Forecasters believe it could develop into a subtropical depression or storm on Friday as it moves from west to southwest in northeastern Bermuda.

The first two names on the storm list are Ana and Bill. Whichever storm is stronger enough to become a named system first is named Ana.

On Thursday, federal forecasters for the National Oceanic and Atmospheric Administration said the 2021 hurricane season should be a busy one, with up to 20 named storms possible. However, the hyperactive season of last year is not expected to approach when 30 named storms formed, including 14 hurricanes.

There’s a 60% chance this hurricane season will be busier than normal and only a 10% chance it will be below normal, NOAA said.

About half the years of the past decade had named storms prior to the start of hurricane season on June 1.

Read this:Andres is the earliest tropical storm in the Pacific