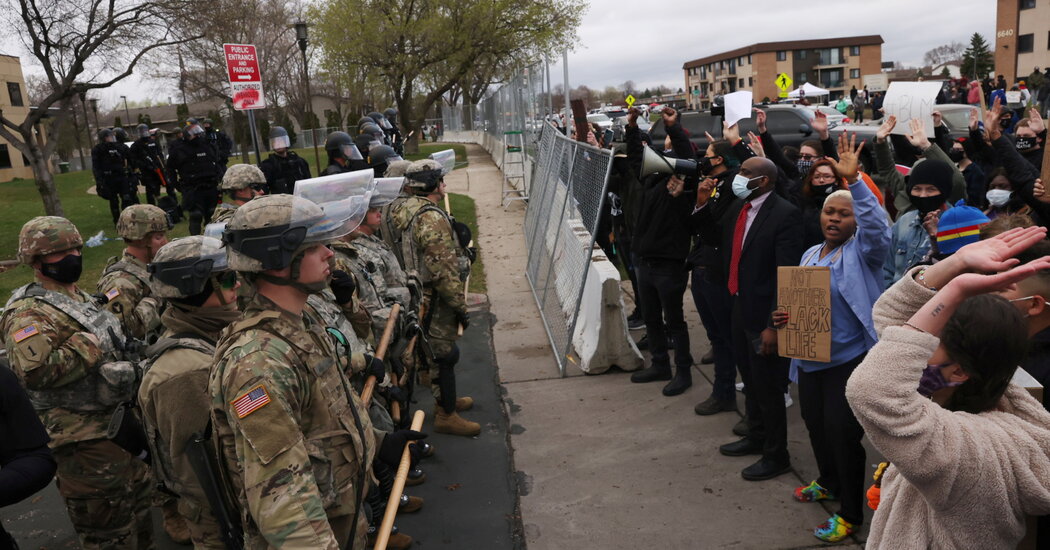 [Follow our live updates on the protests expected after the Daunte Wright shooting.]

The shooting brought more frustration and fear to the Twin Cities area, where the trial of Derek Chauvin, the former Minneapolis police officer charged with the murder of George Floyd, is now in its third week.

Here’s what we know about what happened at Brooklyn Center.

The latest reports on the shooting.

Brooklyn Center Police Department Chief Tim Gannon said officers stopped Mr. Wright on Sunday afternoon for a traffic violation related to expired registration tags. The officers then found that he had an arrest warrant against him.

When police tried to arrest Mr. Wright, he got back in his car and started a brief fight with the officers, Chief Gannon said.

In graphic body camera footage shown to reporters on Monday, an officer can be seen pointing a gun at him and shouting “Taser”. After the car drove away, the officer shouted profanity and said, according to the video, to two other officers: “I just shot him.”

The car drove several blocks and hit another vehicle. Police and medical workers pronounced Mr. Wright dead at the scene.

“I believe the officer intended to use his taser but instead shot Mr. Wright with a single bullet,” Chief Gannon said at a news conference. “This seems to me from my point of view and the officer’s reaction and grief immediately after that this was an accidental discharge that resulted in the tragic death of Mr. Wright.”

The officer who shot Mr. Wright was identified Monday night as Kim Potter, a 26-year veteran of the department. Officials said she was on administrative leave.

The Hennepin County coroner concluded Monday that Mr. Wright “died from a gunshot wound to the chest and the nature of the death is murder.”

Court records indicate that a judge issued an arrest warrant for Mr Wright earlier this month after missing a court visit. He faced two misdemeanor charges after Minneapolis police said he carried a pistol without permission and fled officials last June.

Chief Gannon failed to identify the officer who fired her gun and said she was on administrative leave.

He said the Minnesota Bureau of Criminal Apprehension, the investigative agency, would publish the names of the officers involved.

Katie Wright, who identified herself as the victim’s mother, told reporters that her son had driven a car his family had given him two weeks ago and that he called her when he was run over.

“He said they pulled him over because he had air fresheners on his rearview mirror,” she said.

She added that her son was driving with his girlfriend when he was shot. Police said a woman in the car suffered non-life-threatening injuries from the accident.

Ms. Wright said her son dropped or hung up the phone whereupon she heard “shuffling” and an officer told Mr. Wright not to run. Then, she said, someone hung up. When she called back, her son’s friend replied, telling her that he had been shot.

Protesters clashed with the police.

During a vigil near the place where Mr. Wright died on Sunday, his mother urged protesters to be peaceful.

“We want justice for Daunte,” she said. “We don’t want it to be about all this violence.”

But hours later, outside the Brooklyn Center Police Department, protesters sang and threw bricks and cans at officers. Protesters approached the building until they were pushed back after officials fired projectiles that burst with a loud bang and gas that burned their throats and eyes.

John Harrington, the commissioner for the Minnesota Department of Public Safety, said that after Mr. Wright’s death, the riot had spread to a mall in Brooklyn Center and people broke into about 20 businesses there.

Minneapolis Mayor Jacob Frey declared a state of emergency on Monday and announced a curfew from 7 p.m. Monday to 6 a.m. Tuesday.

At the press conference on Monday, Mayor Mike Elliott of the Brooklyn Center called for the release of the officer who shot Mr. Wright.

“My position is that we cannot afford to make mistakes that lead to the death of other people in our profession,” he said.