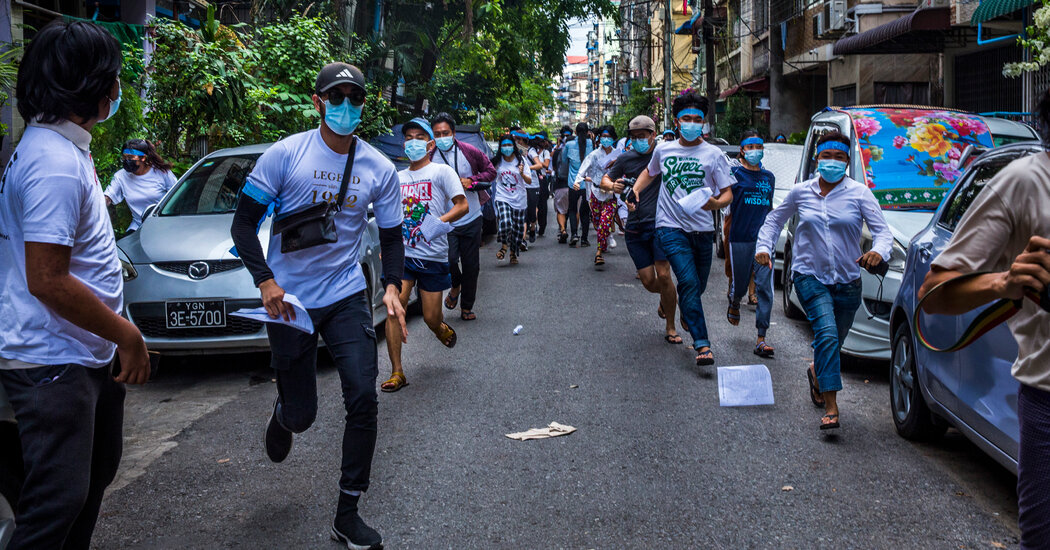 Every evening at 8 a.m., the news anchor with the stern face announces the day of the hunt on Myanmar’s military television. Mug photos of those charged with political crimes appear on the screen. Among them are doctors, students, beauty queens, actors, reporters, and even two makeup bloggers.

Some of the faces look puffy and bruised, which is likely due to interrogation. They warn against opposing the military junta that seized power in a February 1 coup and imprisoned the country’s civilian leaders.

As the midnight insects trill, the hunt intensifies. Military censors are severing the internet in most parts of Myanmar, balancing the darkness outside with a loss of information. Soldiers sweep through the cities, arrest, kidnap and attack with slingshots and rifles.

The nightly knocking on doors, as arbitrary as it is feared, triggers a madness of self-preservation. Residents delete their Facebook accounts, destroy incriminating cell phone cards and erase traces of support for the Myanmar elected government. With sleep proving elusive, it’s like much of the nation is suffering from collective insomnia.

A little over a decade ago, the most innocuous violation – possessing a photo of pro-democracy leader Daw Aung San Suu Kyi, or an unregistered cell phone or a single banknote – could mean imprisonment. Some of the Orwellian dictates of the military rivaled those of North Korea.

Three months after Myanmar’s experiment in democracy was strangled by the takeover of power by the generals, the sense of foreboding has returned. There is no indication that it is getting any easier. For almost 60 years, the rule of the military over Myanmar was not one of great ideology, but of fear. Today, with much of the population determined to oppose the coup plotters, a new junta is consolidating its influence by resorting to a reign of terror again.

“Myanmar is returning to the bad old days when people were so scared that their neighbors reported them and they could be arrested for no reason,” said Ko Moe Yan Naing, a former police officer who is now hiding against the coup.

The prisons are full again with poets, Buddhist monks and politicians. Hundreds more, many young men, have disappeared and their families are ignorant of their whereabouts, according to a group tracking the arrests of the military. More than 770 civilians, including dozens of children, have been killed by security forces since the coup.

Just like years ago, people walk through the streets with the adrenaline-charged feeling of tingly hair on the back of their necks, a look from a soldier or a lingering look from a passer-by who is cooling the air.

However, when the junta reflexively returns to rule out of fear, it is also holding a transformed country hostage. The fundamental wave of opposition to the coup, which sparked protests in hundreds of cities and towns, was certainly not part of the military’s game plan, which makes its approach all the more risky. Neither the outcome of the coup nor the fate of the resistance are predetermined.

Myanmar’s full emergence from isolation – economically, politically and socially – came only five years ago when the military began to share power with an elected government led by Ms. Aung San Suu Kyi. A population barely connected to the Internet quickly made up for lost time. Today, its citizenship is very familiar with social media and the power of protests tied to global movements. They know how to find a good political meme on the internet.

Their opposition to the coup included a national strike and civil disobedience movement that paralyzed the economy and disrupted the government. Banks and hospitals are as good as closed. Although the United Nations has warned that half the country could live in poverty by next year due to the pandemic and political crisis, the determination of the democratic opposition shows no sign of weakening.

Police are now stopping people on the street and looking on their phones or support points for evidence of the National Unity Government, a civil agency established after the elected leadership was expelled by the military. A popular tactic is to stick a picture of Major General Min Aung Hlaing, the coup leader, on the sole of a shoe and slap his face into the ground with every step. During the spot checks, the police are now demanding that people show their soles.

Ms. Thuzar Nwe says she is wearing down her hair to cover her tattoo in hopes the police won’t get too nosy.

“In Myanmar culture, if a woman has a tattoo, she is a bad girl,” she said. “I broke the rules of culture. This revolution is a rare opportunity to eradicate dictatorship from the country. “

But the Tatmadaw, as the Myanmar military is called, has built up an entire infrastructure devoted to one purpose: maintaining their power for the sake of power.

The bureaucracy of oppression is enormous. An army of informants known as “Dalan” has resurfaced, monitoring the whispers and movements of the neighbors.

The mildly named Department of General Administration, a gigantic apparatus that remained under military control even after the army’s authority began with the civilian government, puts the administrators under renewed pressure to keep an eye on everyone’s political views. And local officials have made it their business to knock on doors and peek into houses as a dreaded household registration system is reintroduced.

Every morning, when residents count the dead and missing, the military media present their version of reality, all the more fully since the junta has revoked the publishing licenses of major private newspapers. Democracy will return soon, so the headlines of the military. Banking services run “as usual”. Health care with “modern machines” is available. The government ministries enjoy English courses. The cultivation of soft-shell crabs “thrives” and penetrates the foreign market.

The Tatmadaw may have upgraded its military arsenal, acquiring Chinese-made weapons and Russian fighter planes. But his propaganda stuck in a time leap from behind when few questioned his narrative. There is no mention in the media of the military rampage, the broken economy or the growing armed resistance. On Wednesday, the State Administration Council, as the junta calls itself, banned satellite television

Despite all the fear in Myanmar, the resistance has only intensified. On Wednesday, the National Unity government said it was forming a “People’s Defense Force” to counter the Tatmadaw. Two days earlier, ethnic insurgents fighting in the border area shot down a Tatmadaw helicopter.

The Tatmadaw media ignores such developments and instead devotes space to the alleged abuses committed by the thousands of civilians who must be imprisoned in order to “undermine the peace and stability of the state.” Among them are AIDS patients who are so weak they can barely walk.

More than for the civilian population, such propaganda is intended to convince the military that the coup was necessary, Tatmadaw insiders said. Soldiers who are confiscated in military buildings without good internet access can hardly take advantage of the outrage of their fellow citizens. Their information diet consists of military television, military newspapers, and the echo chambers of military-dominated Facebook on the rare occasions they can get online.

Even so, news is filtering in and some officers have broken their rank. According to military colleagues, around 80 officers of the Myanmar Air Force have been abandoned in the past few weeks and are now hiding.

“Politics is not a soldier’s business,” said an air force captain who is now in hiding and does not want his name to be used because his family could be punished for deserting. “Now the Tatmadaw have become terrorists and I don’t want to be part of them.”

In the cities, almost everyone seems to know someone who has been arrested, beaten, or forced to bribe security forces in exchange for freedom.

Last month, Ma May Thaw Zin, a 19-year-old law student, took part in a flash mob protest in Yangon, the country’s largest city. The police, she said, arrested several young women and put them in an interrogation center cell that was so small that there was little room for them to sit on the floor.

There was no food for a whole day. Ms. May Thaw Zin said she drank from the toilet. The interrogations were just her and a group of men. They rubbed against her and kicked her breasts and face with their boots, she said. She was released on the fourth day after men pushed the barrel of a pistol against the black hood over her head. The bruises remain.

Since she returned home, some family members have refused to have anything to do with her because she was caught protesting, Ms. May Thaw Zin said. Even if they hate the coup, even if they know their future is blunted, survival instincts have taken hold.

“You are scared,” she said, “but I cannot accept that my country will return to the old dark age.”