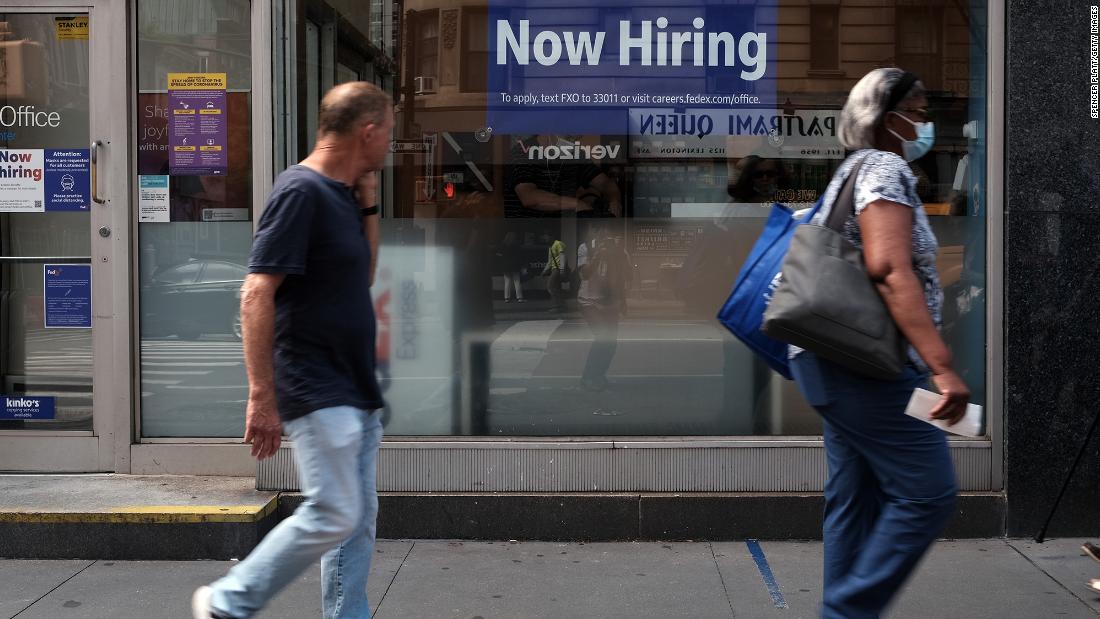 In normal times the August report would have been a cause for celebration, but today it is a big slowdown from the buoyant job reports at the beginning of summer. Friday’s report fell far short of economists’ already reduced expectations: the predictions for Friday’s labor market report had been revised down from 750,000 earlier to 728,000 after Wednesday’s ADP employment report, which also includes private payrolls, also disappointed.

Almost a year and a half after recovering, the US economy is 5.3 million jobs down on February 2020 before Covid-19 put a wrench into the gearbox.

Last month, 5.6 million people said they were unable to work or worked short-time because their employer was affected by the pandemic.

With all the bad news, there was also some silver lining: The unemployment rate fell from 5.4% to 5.2% in August, the Bureau of Labor Statistics reported on Friday. Also, the July job growth has been revised to 1.1 million, the first increase of a million or more since August 2020.

The delta variant leaves its mark

Meanwhile, the leisure and hospitality industry, which generated job gains during much of the recovery after the sector was hit hardest during the lockdown, was not among the top hiring companies in August. Instead, professional and business services, transportation and warehousing, private education and manufacturing saw the largest increases in employment. In the leisure and hospitality industry, jobs were largely unchanged in August, but restaurants and bars lost 42,000 jobs.

The leisure and hospitality sectors had been talking about labor shortages for the past few months, Zhao noted. But the Delta variant has caused Covid-19 infections to spike across the country, leading to a return in masking requirements and health safety guidelines – which is stopping some people’s travel plans.

Concerns about contagion and the importance of Delta to the recovery also began to weigh on consumer sentiment, which plummeted in August to its lowest level since December 2011.

The slowdown in employment growth is the latest dark cloud that has hung over the recovery in recent months. Economists are increasingly concerned about the rest of the year. Some fear a repeat of last winter – when Covid cases increased and led to renewed restrictions that led to job losses in December. That would be bad news for recovery.

Economists had hoped that going back to school this month would help ease the burden of childcare for so many Americans and get many people back to work. But Delta could ruin that too.

“It looks like the reopening of schools will be disrupted, which will keep parents away from working life,” said Zhao.

The recovery has been mixed and this trend continued into August.

Unemployment rates for white, Asian, and Hispanic workers fell, while black unemployment rose from 8.2% to 8.8%.

What that means for the Fed

The August job report was also very important to investors and the Federal Reserve, which is likely to stick with its ultra-accommodative policies for a while longer.

The central bank cut rates and launched a massive asset purchase program to prop up the economy at the start of the pandemic. But the recovery has come a long way since then, leading investors to wonder when the Fed will normalize its policies.

Rapidly rising inflation and improvements in the labor market created conditions that made the Fed more likely to cut its monthly bond purchases. But with a big job loss like Friday’s report, chances are good the central bank will stick to its policies until it sees more convincing numbers.