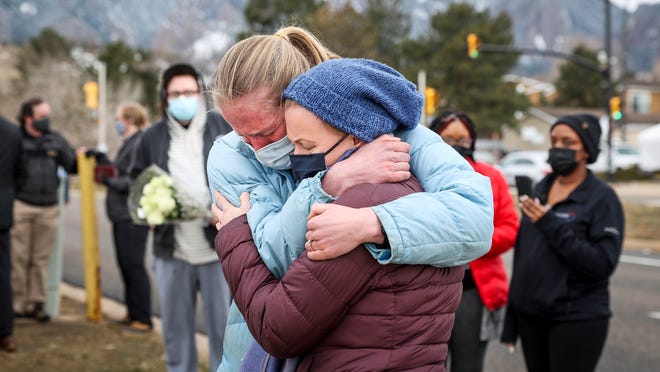 A 21-year-old Colorado man faced murder charges Tuesday in the shooting rampage at a Boulder supermarket that left 10 people dead and fueled chaos as panicked shoppers fled to safety amid the hail of bullets.

Boulder Police Chief Maris Herold released the names of the victims and said they ranged in age from 20 to 65. Among them was officer Eric Talley, 51, a father of seven who responded to the 911 call.

Monday’s carnage was the nation’s second mass shooting in a week, coming six days after an attack at three Georgia massage spas that left eight people dead. The Boulder attack was the seventh mass killing this year in the U.S., according to a database compiled by The Associated Press, USA TODAY and Northeastern University.

The Boulder shooting suspect, identified as Ahmad Al Aliwi Alissa, was shot in the leg, Herold said. He was booked into the county jail on murder charges Tuesday after being treated at a hospital. Alissa is due to make his first court appearance Thursday.

“Today our city is grieving the senseless loss of 10 lives in our community,” Mayor Sam Weaver said. “A man with a gun monstrously struck them down.”

Investigators have not established a motive, but they believe Alissa was the only shooter, Boulder County District Attorney Michael Dougherty said.

Details we know so far:

The 21-year-old suspect in Monday’s deadly shooting in Boulder, Colorado, was described by family members as paranoid and antisocial, and his brother said he believes younger sibling Ahmad Al Aliwi Alissa is mentally ill.

Alissa, a resident of the Denver suburb of Arvada, went to a King Soopers supermarket in Boulder — about 20 miles away — with two weapons, including an AR-15-style rifle he purchased six days before, according to an arrest affidavit. He shot and killed 10 people before surrendering to police with a leg wound, after stripping down to his shorts.

The affidavit describes Alissa as standing 5 feet, 6 inches tall, and weighing 200 pounds, with a beer belly and a balding head.

Ali Alissa, 34, told CNN his brother was bullied in high school for being Muslim and became antisocial and increasingly paranoid around 2014. As a high school senior in 2018, Ahmad Alissa was found guilty of assaulting a fellow student in class after knocking him to the floor and punching him in the head several times, according to a police affidavit that said Alissa complained the student had called him “racial names.”

Ali Alissa said he believes his brother has a mental illness.

“He always suspected someone was behind him, someone was chasing him,” Ali Alissa said. “He would say, ‘Someone is chasing me, someone is investigating me,’ and we’re like, ‘Come on, man, there’s nothing.’ He was just closing into himself.’’

In his remarks Tuesday about the Boulder rampage, President Joe Biden jumped straight into the thorny issue of gun control, calling on Congress to pass legislation to ban assault weapons and high-capacity magazines and to close loopholes in background checks. He urged the Senate to approve two bills to bolster federal gun laws that the House passed earlier this month.

“These are bills that received votes with both Republicans and Democrats in the House. This is not and should not be a partisan issue,” Biden said. “This is an American issue that will save lives, American lives. And we have to act. We should also ban assault weapons in the process.”

Addressing the grieving families of victims of gun violence, not only from the two mass shootings within a week in Colorado and Georgia but also previous incidents across the U.S., Biden said: “We have to act so there’s not more of you, there’s fewer of you as time goes on.”

A handful of vigils have been scheduled to commemorate the victims of Monday’s shooting rampage at a supermarket in Boulder, Colorado, which claimed 10 lives.

Among the live remembrances, a candlelight vigil originally scheduled for Tuesday at 7 p.m. Mountain time at the Boulder County Courthouse was moved to Wednesday at the same time and location. Another vigil is set for Thursday at 6:30 p.m. MT at Fairview High School in Boulder.

There’s also a virtual vigil at 6 p.m. MT Tuesday, open to anyone and hosted by the Unitarian Universalist Church of Boulder.

A day after mayhem, quiet

At the King Soopers on Tuesday, yellow crime-scene tape ringed a parking lot filled with Subarus, Jeeps and other cars abandoned by their owners. One car’s trunk remained open, as if deserted while its owner was loading groceries when the shooting began. Police officers from neighboring cities were helping secure the area, and evidence markers dotted the parking lot, along with two black tents erected where bodies once lay. A small memorial of flowers and signs was growing outside the hastily erected fence keeping the public away. Broken glass lay on the pavement in several areas, from the store’s windows, but also from the front windows of a Ford Transit delivery van.﻿

How to help the victims’ families

Two organizations have already stepped up to lend a hand to those most impacted by Monday’s massacre at a Boulder, Colorado, supermarket. More groups are likely to offer help.

The Colorado Healing Fund, a nonprofit that provides a secure way to donate to the victims of mass casualty crimes in the state, is collecting funds online at coloradohealingfund.org.

In addition, The Salvation Army will offer meals to first responders and families of victims and survivors of the shooting at Boulder’s Family Assistance Center. Donations to The Salvation Army can be made at westernusa.salvationarmy.org.

Kim Cordova, the president of a union that represents 32 workers at the store’s meat department, said there was mass confusion when the incident began and some workers at first thought the shooter was on the roof.

Witness: ‘It devolved into chaos’ in minutes

Anna Haynes said she was in her apartment across the street from the store when she heard noises outside that she assumed were firecrackers or a car backfiring. She told CNN she looked outside to see a body on the ground and a man, armed with a semiautomatic rifle, shoot at someone. He then went inside the store, and moments later people were running out.

“It devolved into chaos in just a couple of minutes,” she said.

Democratic Rep. Joe Neguse, whose district includes Boulder, said the loss of life “is truly heartbreaking and unimaginable.” He expressed condolences to the victims and added that “enough is enough.”

“If we are truly invested in saving lives, then we must have the willpower to act and to pass meaningful gun reform,” Neguse said in a statement. ”The time for inaction is over.”

On Tuesday, the Senate Judiciary Committee was holding a hearing on possible steps to reduce gun violence. The panel’s chairman, Sen. Dick Durbin, tweeted Monday evening that shooting spree and one in Georgia last week have left the nation “reeling.”

“And it’s not just mass shootings: according to the CDC, on average, 109 Americans lose their lives every day to gun violence. It’s long past time to act on this nation’s gun violence epidemic,” Durbin said.

Store employee hid behind trash can

Logan Smith was working at the Starbucks kiosk in the store when a customer alerted him that there was an active shooter in the parking lot. Smith told the “Today” show he ran outside briefly then back inside and called 911. He helped hide a coworker behind some trash cans behind the kiosk, then tried to hide himself.

“I was definitely in a life-threatening situation if the shooter came to the kiosk,” he said. When it was over, at least two friends and co-workers had been killed, he said. Another friend has not answered his phone, and Smith said he does not yet know that friend’s fate.

“It’s definitely been rough,” he said. “It’s harder than it was yesterday, just thinking about the friends that I lost.”

Shopper fled to back of store, saw ‘a lot of very wide eyes’

Ryan Borowski was shopping for chips and a Cherry Coke when the shooting began. Borowski told CNN he was near the front of the store when he heard the first shot. The store went quiet, he said, like a restaurant when a waiter drops a tray of plates.

By the third shot, he was running to the back of the store. He never saw the gunman or the victims.

“What I saw was a terrified face running toward me,” he said. “We all ran… I saw a lot of very wide eyes.”

The slain officer was identified as Eric Talley, 51, who had been with the police department since 2010, Herold said. He went to the store after a call about shots fired and someone carrying a rifle, she said.

“He was by all accounts one of the outstanding officers of the Boulder Police Department, and his life was cut too short,” Dougherty said of Talley.

On Tuesday, Biden commended Talley’s “exceptional bravery,” saying, “When the moment to act came, officer Talley did not hesitate in his duty, making the ultimate sacrifice in his effort to save lives. That’s the definition of an American hero.”

Lull in mass killings during pandemic may be over

The attack was the seventh mass killing this year in the U.S., according to a database compiled by The Associated Press, USA TODAY and Northeastern University. The rampage came less than a week after the March 16 shooting that left eight people dead at three Atlanta-area massage businesses. It follows a lull in mass killings during the pandemic in 2020, which had the smallest number of such attacks in more than a decade, according to the database. Mass killings in the database are defined as four or more dead, not including the shooter.

In a statement, Cincinnati-based Kroger said it is “horrified and heartbroken over the senseless violence that occurred at our King Soopers store.”

“In the hours since the shooting, we’re learning of truly heroic acts that included associates, customers and first responders selflessly helping to protect and save others,” the statement said. “We will remain forever grateful to the first responders who so bravely responded to protect our associates and customers.”

The company offered prayers and support for all affected, including the three grocery workers who died in the killings. In the wake of mass shootings elsewhere, Kroger asked shoppers in 2019 to leave firearms at home. The change in policy came a day after grocery rival Walmart made a similar shift.

Colorado has a grim, recent history of shooting sprees, all within 70 miles of Boulder. The first was a 1999 massacre at Columbine High School. Thirteen people were killed and 21 wounded by gunfire before the perpetrators – a pair of students – took their own lives.

In 2012, a lone gunman opened fire at a movie theater in Aurora, Colorado, during a showing of “The Dark Knight Rises.” The assailant, who was convicted and sentenced to life in prison, used tear gas and multiple guns as he sealed off doors and terrorized 400 people. Twelve died and 58 others suffered gunshot wounds.

And in May 2019, one student was killed and eight others injured in an ambush attack at STEM School Highlands Ranch, a charter school located in Douglas County. As in Columbine, the assailants were students. One pleaded guilty and the other is awaiting trial in May 2021.

The mass killing, as well as the shootings that left eight dead in Georgia last week, have drawn greater scrutiny to a problem that has been boiling over throughout the past year.

Mass shootings — incidents that injure or kill more than four people, not including the perpetrator — rose nearly 50% in 2020 amid the pandemic that left millions unemployed and millions of teenagers idle.