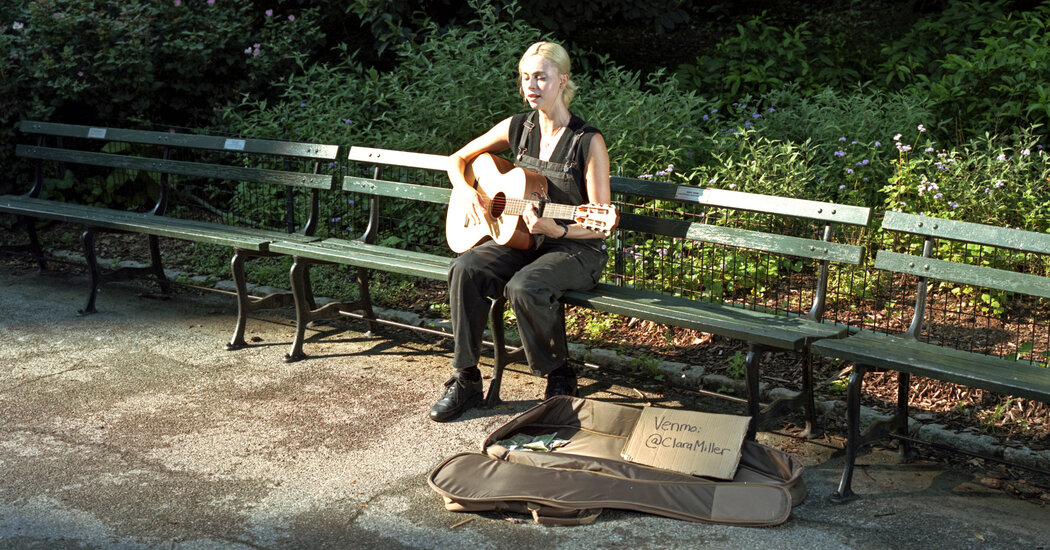 Before the pandemic, Clara Miller had a secret that she kept from her dance world at the New York City Ballet. Well the caretakers knew.

After dance performances, she went to empty studios to rehearse. But she didn’t dance. Armed with her voice and a piano, she wrote and sang songs – sometimes, as she remembered, she did not raise her voice above a whisper.

Cover songs were also part of her repertoire. Once she used a rehearsal piano on the stage of the David H. Koch Theater and sang “Dancing in the Dark” in front of an empty house. “It felt like I was playing for an audience of ghosts,” she said in a recent Zoom interview.

She often made videos of herself performing; she didn’t know how to write down her compositions. But one question remained: “I would listen and say, ‘Does my brain only hear my voice?'” She said. “‘Or am I really bad and just don’t hear it? Can I actually sing? ‘”

“It was like my hidden, secret little passion,” she added, “that I didn’t want to share with anyone until I figured it out.”

She found out. She can sing.

Miller, 25 and a member of City Ballet since 2015, specializes in a mix of indie folk and indie rock, with a voice – pleading, ethereal, elated – that hovers in a space of vulnerability. It feels exposed and tender, but there is also an underlying trust: she knows she is giving out secrets. “Oath”, their debut EP, was released this month. On Friday she will perform at Bitter End. (She has recorded and appears under the nickname Clanklin, but will begin to use her full name.)

Her songs don’t ignore the trauma she experienced, especially her difficult relationship with her father growing up – it’s better now – but they also deal with lighter subjects, like an unrequited crush.

She calls Phoebe Bridgers her queen – “Women save music,” she said – but she also loves Lucy Dacus, who founded the Boygenius group with Bridgers and Julien Baker, Fiona Apple, Samia and Soccer Mommy. “And I’m always a fan of Stevie Nicks,” Miller said with big and serious blue eyes. “I have her photo on my bathroom wall. She is everything. “

Miller recently released a video of the first track, “Graveyard,” which was filmed by Devin Alberda, a member of the City Ballet, in Green-Wood Cemetery. Miller calls Alberda – who has also explored another type of art as a photographer – her mentor. (Wendy Whelan, the company’s assistant artistic director, republished the video, calling Miller “City Ballet’s own songbird.”)

Miller and Alberda became close friends during the pandemic. “She writes these songs for herself,” he said, “and we’re lucky enough to hear her and see her transform through them.”

Alberda added that he was impressed with “the empathy, tenderness and emotional maturity she can bring to her approach to life – she has gone through more physical trauma than almost anyone I know. I don’t know anyone who has had their backs opened twice. “

Miller has had two spinal surgeries – vertebral body tethering – to correct idiopathic scoliosis. The second occurred in October 2020; She knew the pandemic would give her ample recovery time. (The cover of their EP shows an x-ray of her spine.) In 2016, tethers were used to straighten her spine. But instead of giving her body enough time to acclimate, she returned to dancing too quickly.

The tethers broke, “and my spine got curved again,” she said. “So they went in and fixed the tethers from the first operation and then they put on a whole different set of tethers and I was like, OK, I have to come back slowly.”

Her first single “Old Car” released her from her hospital bed, where she had to stay for 10 days. “Songwriting was the only opportunity I had and I really appreciate that,” Miller said. “If I can’t dance, I have to express myself somehow, otherwise I’ll feel sick.”

As a musician, she is basically self-taught. As a high school student, she took piano lessons at the City Ballet-affiliated School of American Ballet, but taught herself to play the guitar – she called her first 18th birthday gift, Stevie – along with the ukulele, banjo and joe the drums.

Learning covers served one purpose: it taught them how to perform. (“Oath” shows her take on Bob Dylan’s “One Too Many Mornings”.)

“It’s like learning a ballet variation and looking at old tapes of ballet dancers and trying to copy some of their artistic moments,” she said. “I just played the songs I loved on the piano. And occasionally a caretaker would come in and I was just about to buckle up and I got so shy. “

When the pandemic broke out, Miller worked from her loft on the Upper West Side, where guitars hang from a brick wall and drums sit on the side. In the early days, she had a reverse sleep cycle, going to bed at 8:00 a.m. and waking up at 4:00 p.m. It was the first time in her life that she didn’t have a strict schedule.

“I started playing the drums at 11pm,” she said, “and my poor neighbor came to my door and said, ‘Please stop.’ So I had to stop. “

What she has really tested in the last year and a half are her limits – both in terms of her dancing and musical self as well as her physical and mental health. Her relationships with several Juilliard alumni – friends who played a role in her musical development – helped. (Along with Steven Robertson, who shares the show with her at Bitter End, some of these friends, the “quarantine crew,” as she calls them, will be performing with her.)

After a period of depression, she was diagnosed with bipolar disorder and started taking medication, which made a real difference. “I had so much more access to my artistic voice because I was more stable,” she said. “And then writing just blossomed and when I wrote all of my EPs, that was from January to March.”

But Miller, who has regular sessions with her physical therapist and takes classes at City Ballet, has no plans to stop dancing, which she called her deepest love. “To me, dancing means becoming one with the music, just like making music,” she said. “For me, it’s all about the music.”

Before the pandemic, she found she danced more freely; she didn’t hold back. “Now I am rediscovering the same lesson with music,” she said. “Even the release of my album was a huge, huge public demonstration that I was nervous about – it’s a very illuminating thing. But at the end of the day my whole thing is, I never want to do anything for fear. Just let it out. “

Busking, mainly in the Times Square subway station and Washington Square Park, was an important teacher. “The first time I played in Times Square, I was sweating all over my body like I was trembling,” Miller said. “I just thought, okay, you have to do this. And the people were so supportive. They took photos and videos and were just so cute. It helped me overcome stage fright. “

As a young dancer, she danced for years – modestly, as she emphasized – for a tiny audience and at competitions on concrete, where, as she laughed, “everything was kind of nonsense”.

Similarly, street musicians are about paying their dues. “I like the feeling of being humiliated and getting back to my roots,” she said. “It was definitely a test of my courage and my ability not to mumble. Sometimes I sing so softly. I mean, now I’m bringing a microphone because I just have to or people wouldn’t hear me. Yes, the microphone is necessary. “