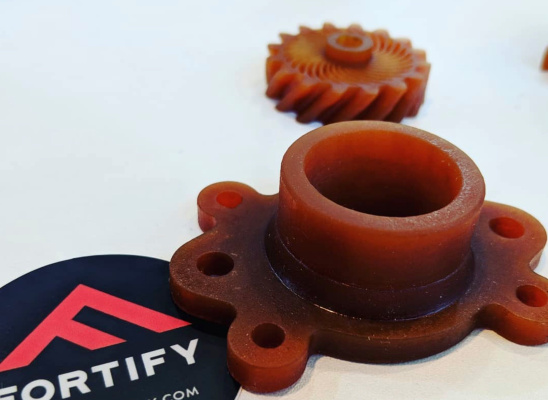 A lot has happened in the field of additive manufacturing in the last few months. If I had to figure out a reason, I would say that – much like robotics (another area that I’m following pretty closely) – the pandemic has seen a surge in interest in the category. Medical applications are understandably of interest lately, as is alternative manufacturing.

Desktop Metal, Markforged, and Newcomer Mantel have made pretty big announcements in the past few weeks, and now Fortify is making the rounds with a noticeable increase. The Boston-based startup announced a $ 20 million Series B equity round led by Cota Capital with additional participation from Accel Partners, Neotribe Ventures and Prelude Ventures.

Fortify tries to stake a claim to material deposits. Using DLP (Digital Light Processing) technology, the company can mix and print different materials with a wide variety of properties. The list includes some useful characteristics, including electromagnetic and thermal.

Like Mantel, the company appears to be targeting manufacturing tools, including injection molding.

“For the past 18 months or more, Fortify has focused on proving the viability of our product and market opportunities and has exceeded our targets set in early 2020,” said CEO Josh Martin in a press release. “This next round will expand our market leadership position in key industries such as injection molding tools, while also allowing us to gain market share in electronic devices.”

In the past few months, the company has also hired other 3D printing veterinarians. Paul Dresens (ex Desktop Metal) has been named VP of Engineering, while Rob Stevens, former market manager of GrabCad (a Stratasys acquisition), has been hired as a consultant.