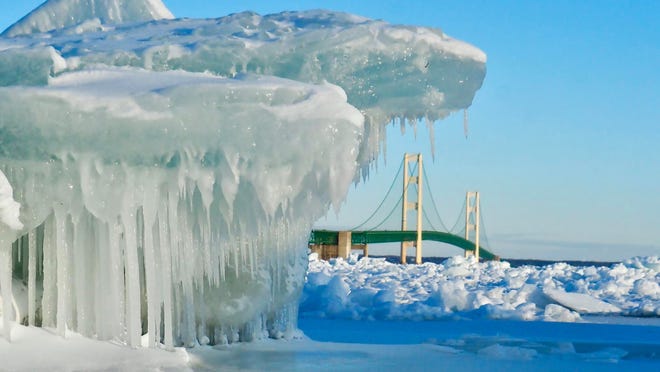 It’s a scene that awe many. Shards of ice that are a blue hue tear from the frozen water on Michigan’s Mackinac Strait.

This natural phenomenon attracts locals, tourists, and photographers hoping to capture the perfect moment when the sun hits the frozen water just right and the brilliant blue ice shines alive.

SteveBaker, 69, a retired veterinarian from Indian River, Michigan, said he had just returned to photograph snowy owls with his friend when they decided to stop by the Strait of Mackinac.

“Our attention was drawn to the ice sheets along the coast and we were soon exploring the Mackinaw City coast,” said Baker.

Baker said when he took the photos the wind chill was subzero so they had to retreat to the car a few times to thaw their fingers and camera batteries. Baker said the ice was about 10 to 15 feet high and the scene was spectacular.

“The conditions were just right and many of the ice sheets were bright blue with the bridge in the background,” he said. “I’ve seen blue ice many times over the years, with March 2018 being the most spectacular, and this current blue ice is on the small side by comparison, but still spectacular to look at.”

Staci Goodale, 45, an ice cream parlor owner from Kingsley, a village in northwest Michigan, took her 18-year-old daughter Mikayla Tyson with her.to see the blue ice as she always wanted to see it in person.

“You could even see the blue from the bank, and when you were out there it was even better,” said Goodale.

Many people made seeing the blue ice an activity or a date.

Julie Suggitt, a business owner and designer, said she and her boyfriend went to the blue ice rink to see the spectacle for themselves. While walking on the lake, she said the water was clear and you could see down.

This natural spectacle takes place when the lake is clear and without bubbles, Great Lakes Environmental Research Laboratory field researcher George Leshkevich told the Free Press in 2018. When short-wave light penetrates the clear, frozen lake, light scatters in the water and reflects back through the ice.

The scene is spectacular in photographs and fascinating in person. But Baker urges those willing to hike to see the blue ice to be careful.

“It’s a little bit risky so they keep people from going out there,” he said. “It’s a relatively small area, but when the sun hits just right it’s a brilliant blue.”