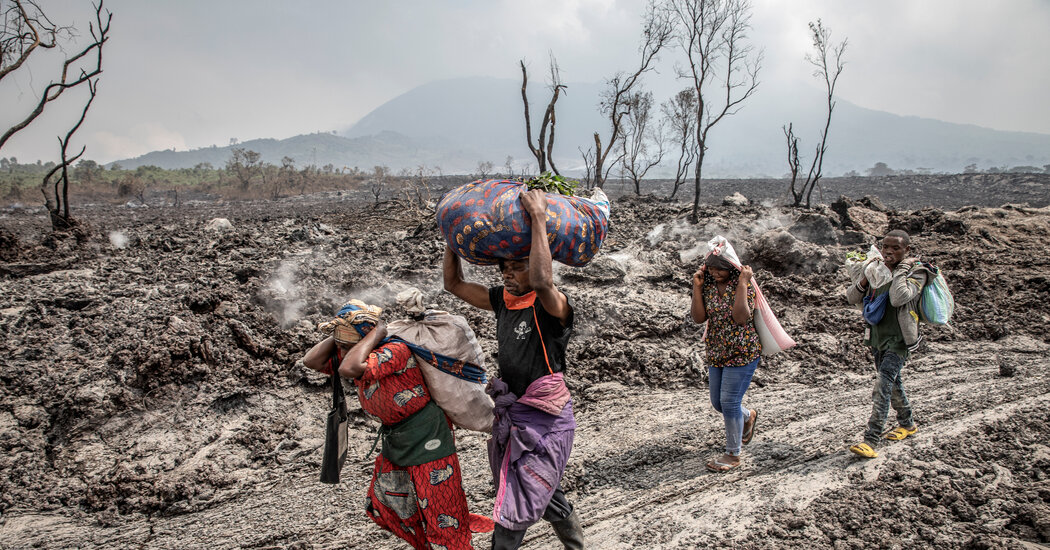 GOMA, Democratic Republic of the Congo – Tens of thousands of people blocked highways, overcrowded boats and set off on foot Thursday to flee this major African city from volcanoes.

After a fiery rift was opened on Saturday that poured a lava stream down the rocky slopes of the mountain towards Goma, killing more than two dozen people, scientists and local authorities warned the danger was not over.

Overnight they ordered up to a million people to evacuate, even as a constant series of tremors and small earthquakes struck the city.

Just 4 km below the unsafe ground, scientists discovered a magma flow, a lake of fire just below the city, and feared that the tectonic activity could trigger a new eruption.

A new rift could open any moment, said Benoît Smets, a geological hazard expert at the Royal Museum for Central Africa in Tervuren, Belgium who is part of an international team that supports the Goma Volcano Observatory, the only monitoring station in the region.

“We have a very active volcano with a very dense and populous city at the base of the volcano, so there is a great risk of disaster,” he said in a telephone interview.

What set the Saturday outbreak apart from two past outbreaks, the most recent in 2002, was that it came without warning, he said.

When the people of Goma and the surrounding towns and villages knew they were in danger, the sky was already on fire. The night sky burned purple for more than five hours as lava poured from the flanks of Mount Nyiragongo.

By the morning, the lava flow had destroyed 17 communities on its way, according to aid organizations.

The lava stopped just outside the city center and almost reached the airport.

Since the eruption, the volcano’s lava basin has filled up quickly and scientists have tried to understand what is happening below the surface of the earth.

The 2002 eruption destroyed about 20 percent of Goma, buried it under molten rock, left 120,000 people homeless and killed about 250 people from carbon dioxide asphyxiation, burns and the lava-triggered gas station explosion.

Since then, the number of people living in the shadow of the 11,385-foot volcano has more than doubled to an estimated 1.5 to two million.

The unstable political situation in the country, ravaged for decades by civil wars, ethnic conflict and systemic corruption, has hampered efforts to investigate the volcano. The World Bank has withdrawn funding for the Goma research facility because it feared the money would be misappropriated.

In 2020, a team of volcanologists had to be flown into the region by United Nations peacekeeping forces, who were protecting the scientists from armed rebels in the region.

Dario Tedesco, a volcanologist at Luigi Vanvitelli University in Campania, Sicily, was on this mission and told the science magazine that he and his colleagues were filling the lava lake there at an alarming rate.

“This is the most dangerous volcano in the world,” he said shortly after this trip.

Located on the tectonic rift known as the East African Rift, on the eastern edge of the Democratic Republic of the Congo near the border with Rwanda, less than eight miles from central Goma, which is on the shores of Lake Kivu.

Although it is not clear whether the recent eruption and seismic activity will trigger a more deadly disaster, officials in the central African country ruled the risk was too great not to take action.

“The situation can change quickly,” the province’s military governor, Lieutenant General Constant Ndima, told the public. “In anticipation of this possible catastrophe and in consultation with scientists and volcanologists, we have decided to relocate the population” from 10 of the 18 boroughs.

Up to a million people live in these counties, but it was difficult to know how many heeded the government’s warning.

Adolphe Basengezi, a taxi driver who lives in Goma, said there weren’t many people left in his neighborhood.

“Most of them ran away,” he said. “I was driving and people on the street panicked and tried to save their lives.”

Many of the city’s wealthier people who can afford cars sped east and into Rwanda. According to an officer at the checkpoint, more than 3,000 had crossed the border by 9:30 a.m.

Others flocked to the harbor on Lake Kivu, hoping to get away on the ferry. Witnesses reported seeing at least two boats so overwhelmed by people that they broke down and had to be abandoned.

However, the lake itself posed another threat.

The lake extends for about 1,600 miles and is partially about 1,500 feet deep. It was formed by the same geological forces that gave birth to Mount Nyiragongo and seven other volcanoes known as the Virunga Range.

Over the years, volcanic activity has resulted in a steady build-up of carbon dioxide and methane at the bottom of the lake.

“Since this lake is very deep, this layer does not mix with the rest,” said Mr Smets. The fear is that if something like an earthquake destabilizes the lake bed and is then exposed to superheated lava, the gas could be released – with fatal consequences for anyone trapped in the suffocating cloud.

“At the moment,” said Mr. Smets, “it is reassuring that there is no sign of disturbance in the lake.”

The danger of the magma moving underground and building up in the volcano was the most pressing concern.

Patrick Muyaya, the country’s communications minister, said at the moment, “Scientists don’t have a clear answer to what’s going on.”

“Goma is exposed to four types of risk: accentuation of earthquakes, new volcanic eruption, explosion of gas pockets under the lake and toxicity of the surroundings,” he said at a news conference on Wednesday.

“Given this range of hazards, and awaiting the results of the surveillance and global analysis of the situation, the only option was to protect human lives and keep the population safe from harm.”

With the evacuation decree issued in the middle of the night, many of those who took to the streets to flee also expressed confusion.

Most of the crowd fled on foot, with their valuable possessions slung over their shoulders and mattresses tied to their backs. All morning and afternoon, a crowd of people marched west towards the town of Sake, which was more than 12 miles away.

“All the streets outside the city are full,” said the taxi driver Basengezi. “People don’t have clear information.”

He said all the hotels in sake were full by the late afternoon and people kept coming back.

But not everyone left. Some, like 28-year-old Albert Muihigi, couldn’t. His mother is diabetic and he had to stay and take care of her.

“Most of those who have left are women and children,” he said. “Many of the young men stayed behind to look after our homes because there are no police.”

He said he was not afraid, but there was an atmosphere of fear in the air.

“We’re young enough that if something happens, we can run away,” he said.

Finbarr O’Reilly reported from Goma and Marc Santora from London. Steve Wembi reported from Kinshasa, Democratic Republic of the Congo.