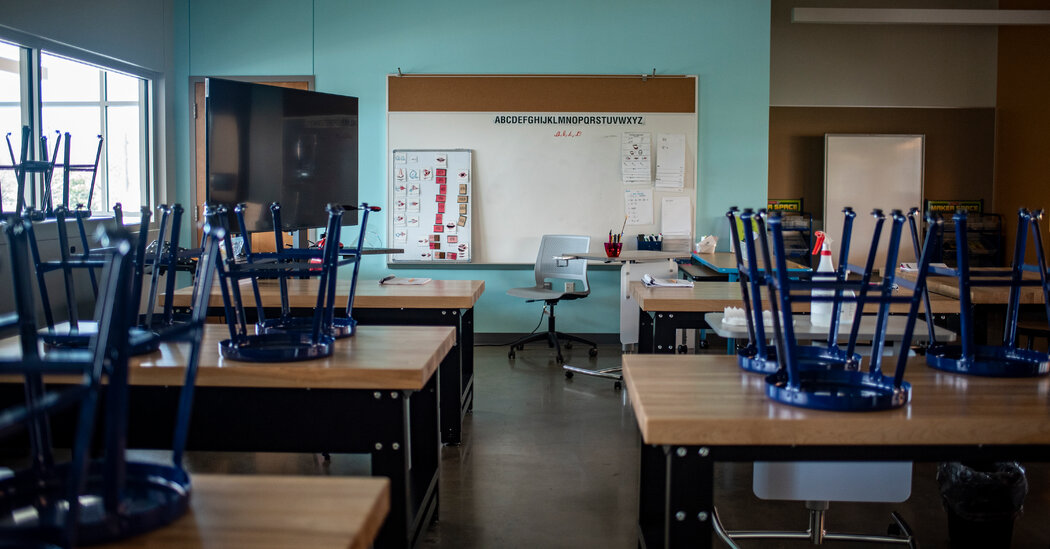 I still remember the disgusting feeling that consumed me when I put my daughter on a school bus two years ago and sent her to the front yard.

I thought I had until college when I dropped her off to begin her adult life before I felt this fear again.

Instead, it returned last month when we received a survey from our Maryland public school system asking if we wanted to send our daughter, our firstborn, now first grader, back to school two days a week during a raging pandemic.

After excruciating deliberations, which included tears and daily flip flops, my husband and I decided to send them back.

I had spent many months reporting on the devastating losses children have suffered since schools closed their doors in March. I had watched in dismay as the public health authorities became politicized and the federal government and many states stalled in fighting the virus. And I had watched public schools across the country reopen with minimal outbreaks or transmission of the disease.

But as I wrestled with all of these experiences, I will confess that I was also influenced by the image of the busy traffic outside of private schools near my home, where personal classes were taking place, and where I often saw masked children running excitedly to greet theirs Parents after class.

As the February 5th deadline approached for the decision, the debates between my husband and I became as intense as the heated public discourse surrounding the school reopening.

It was heavily influenced by recent public health guidelines, including last month’s report from the Centers for Disease Control and Prevention, which indicated that schools could safely reopen with appropriate mitigation strategies. “The same science that keeps me from sitting in a restaurant is the same science that says we should send them to school,” he said.

I was more influenced by the downside of the realities we see on a daily basis. We don’t live in rural Wisconsin, where the CDC study is based; We live just outside the urban core of Baltimore. Our zip code has Going to the pediatrician’s office during the flu season is not recommended.

“The reasons why I wouldn’t sit in a restaurant or send them to school are one and the same,” I argued. “The virus is still changing, people are still dying.”

Another dynamic at the center of the reopening debate also played out in my house. I am a black woman who lost my mother last month. All of her life she had struggled with illnesses – including stroke and social stressors – that contributed to the disproportionately lethal effects of the virus on my community.

My mother tested positive for the coronavirus at her Baltimore nursing home in November and appeared to be clear about a negative test just weeks before she died. We will never know if the virus hastened their death.

My husband is white and his New York state parents – one who works in the health care sector and one who belongs to a priority age group – are among the 10th Americans to receive at least one dose of vaccine.

With two journalists as parents, my daughter is (unfortunately maybe) very aware of the havoc the coronavirus has wreaked in the world. She has stated more than once that “Coronavirus sucks” and has written for an assignment that she hopes will “Corona stop so we don’t die”.

A compulsive mask wearer and hand washing machine, she asks us where we go on the rare occasions we leave the house and once even ran away from her beloved grandmother when she tried to hug her in a moment of weakness.

It adapted to the virtual school as well as I hoped it would. But in a school that has high numbers of low-income children, she appears to be one of the few students in her class who succeeds – she participates in discussions, gets assignments, and gets glowing reviews from her teacher.

No doubt it’s because she has everything she needs at home, including parents who have the essentials and the privileges to make sure she gets away as safe as possible. I feared that if we were responsible for causing someone we love, including their educators, to get sick – or worse, sending them back would undo all of this.

Once it became clear that we were stuck, I did what I always did when I was concerned about my daughter’s wellbeing at school: I contacted her teacher and headmaster.

The reporter in me shifted into gear as I patted her headmistress – one of the best I’ve met in my 10 years in education – about cohort sizes, safety measures in classrooms and in the cafeteria, supplies (they ran out of soap previously) and assessment of the physical building, including ventilation and HVAC controls.

But when I became a mother, in my most vulnerable state, I got the assurance I needed.

“Look, no judgment,” I asked tearfully. “But please, I’m scared. Tell me can you do this “

“Will you let me know if you ever feel like you can’t?” I asked.

“When was I not being honest with you?” She answered.

Her teacher, to whom I attribute my daughter who is academically successful in distance learning, was a total rock star during the pandemic. Her cheerful voice booms through our house as she diligently teaches and encourages her students through the screen.

When she indicated she was excited to return to teach the students in person, I was convinced. Not that the virus will go away, or that there is no risk, or that science won’t change in just a few months.

I was convinced that I could get out of this terrible school year and feel the same as I did on that summer day two years ago when I saw my little girl get on the school bus for the first time: that I could trust the educators in their school to help them to protect.

And that I made the best decision I could.

My daughter seems cautiously optimistic about going back to school. For this occasion, she requested pearl braids and “prettier” masks.

When she returns to school on March 1st, I’ll be scared. And excited.