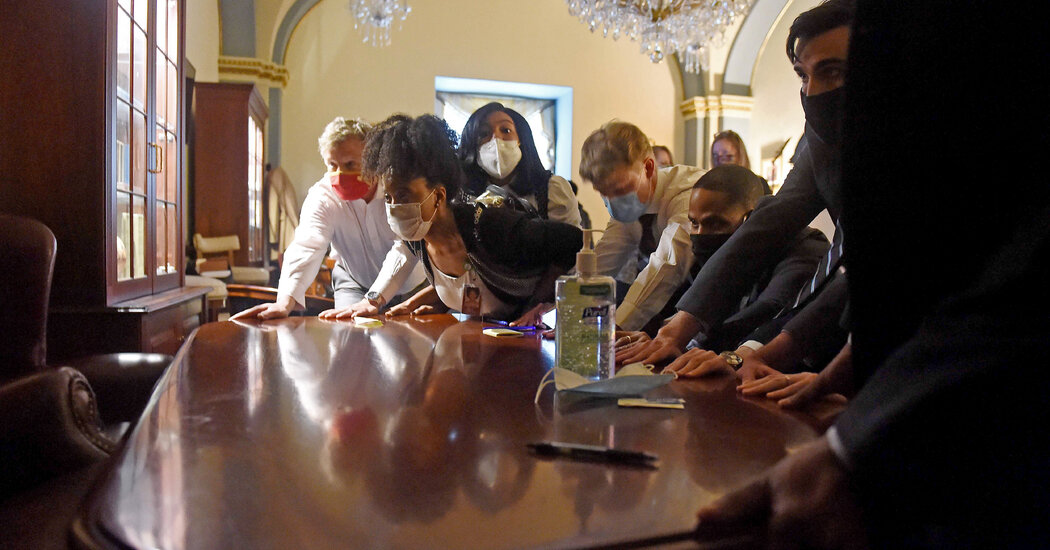 WASHINGTON – More than 370 Democratic congressional assistants will launch an unusual public appeal Wednesday to the Senators – in some cases their own bosses – to condemn former President Donald J. Trump for inciting a violent “attack on our workplace”, the the peaceful transition threatens power.

In a very personal letter, the employees describe how they duck under office desks, barricade themselves in offices or watch as they watch marauding groups of rioters who have “smashed” their way through the Capitol on January 6th. The responsibility, they argue, lies directly with them on Mr. Trump and his “baseless, month-long efforts to reject legitimately cast votes by the American people.”

“As Congressional officials, we don’t have a vote on whether to convict Donald J. Trump for his role in inciting the violent attack on the Capitol, but our senators do,” they wrote. “And for our sake and for the sake of the country, we ask that you vote to condemn the former president and prevent him from ever taking office again.”

A copy of the letter, including the names of the signatories, was provided to the New York Times prior to its publication on Wednesday, four weeks after the attack and days before the Senate impeachment proceedings.

The letter, while not binding in any way, underlined the remarkable dynamism of the trial of Mr. Trump, in which many of the witnesses and victims of the “incitement to rebellion” he accused are among the closest advisers to lawmakers who will decide his trial political fate. Congressional assistants often advise the elected officials they serve behind closed doors, and many are empowered to speak on behalf of those officials. But extremely rarely do they express their own views in public – let alone press for such a powerful political and constitutional means as impeachment.

Signatories included press officers, planners, committee staff, and advisers to the House and Senate, although relatively few were from the senior level of the committee’s chiefs of staff or directors. These included Drew Hammill, assistant chief of staff to Spokeswoman Nancy Pelosi, as well as communications assistants closely associated with lawmakers involved in Mr Trump’s impeachment, such as Shadawn Reddick-Smith, who works for the Democrats in the House Justice Committee; Gabby Richards, communications director for Rep Mary Gay Scanlon of Pennsylvania; Anne Feldman, director of communications for Jason Crow representative of Colorado; and Daniel Gleick, communications director for Val Demings representative of Florida.

The organizers of the letter asked Republican workers for assistance and offered to include a language to allay their concerns about boss retaliation or social media harassment. But despite the preliminary interest of some, said those familiar with the effort, ultimately no Republican aid workers signed up.

While public attention has focused on the stories of their better-known bosses, congressional assistants who were at the Capitol on Jan. 6 have privately fought for weeks to make sense of what they saw in the building’s normally silent halls. Unlike their superiors, they usually have few outlets to publicly share this experience.

In the letter to the senators, the aides refer to Brian D. Sicknick, a Capitol police officer who died after meeting the mob, as “one of our employees who watches and greets us every day.” The letter also states that in the age of the mass shootings in the post-Columbine school, many of the signatories had come of age and had been trained to respond.

“When the mob broke through the barricades of the Capitol Police, broke in doors and windows and stormed into the Capitol with body armor and weapons, many of us hid behind chairs and under desks or barricaded ourselves in offices,” they wrote. “Others watched on television, desperately trying to reach bosses and coworkers as they fled for their lives.”