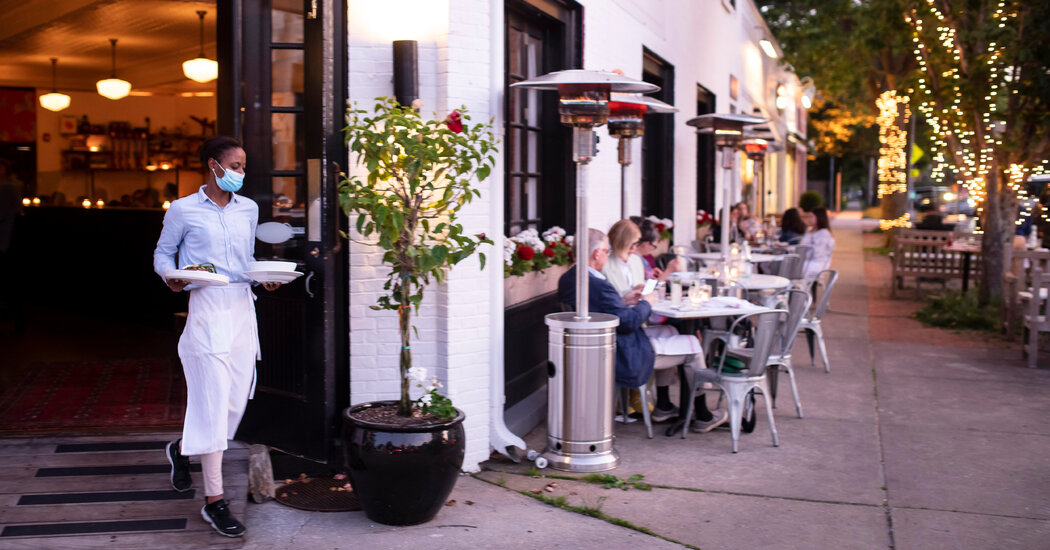 Hiring leapt back up in June as employers added 850,000 workers, the government reported Friday, a fresh sign that the labor market’s recovery is gaining momentum.

The report follows several promising economic developments this week. Consumer confidence, which surged in June, is at its highest point since the pandemic’s onset last year. Stocks closed out the first half of the year at record highs, and businesses’ plans for capital investments are rising. The Congressional Budget Office said Thursday that the economy was on track to recover all the jobs lost in the pandemic by the middle of next year.

At the moment, more than six million fewer jobs exist than before the pandemic. Millions of people have dropped out of the labor force, however, and “job openings far outnumber the applicants,” said Karen Fichuk, chief executive of the staffing company Randstad North America. “It is truly across the board right now.”

Aside from ever-present concerns about pay and benefits, workers are particularly interested in jobs that allow them to work remotely at least some of the time. According to a Ranstad survey of more than 1,200 people, 54 percent say they prefer a flexible work arrangement that doesn’t require them to be on-site full-time.

Health and safety concerns are also very much on the minds of workers whose jobs require face-to-face interactions, the survey found.

“This is a trickier phase of the recovery,” said Sarah House, a senior economist with Wells Fargo. Last year, millions of workers were only temporarily laid off and able to slot back into their previous positions with little delay once reopening began.

Now, employers and workers are “having to make new matches and new connections, and that just takes more time,” she said.

Economists also point to a widespread reallocation of labor — like rounds of musical chairs on a mammoth scale — in which workers are re-evaluating their options. During the pandemic, many workers who had held restaurant and retail jobs may have taken positions in warehouses and manufacturing plants.

At the same time, the appetite for pandemic-driven jobs such as couriers and grocery store workers are ebbing as sectors like leisure and hospitality ramp up. 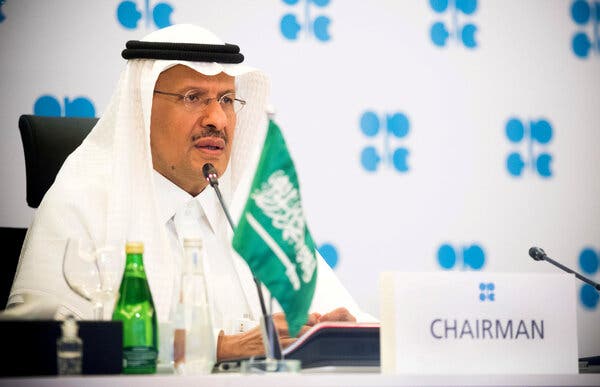 Saudi Arabia’s energy minister, Prince Abdulaziz bin Salman, who is chairman of OPEC Plus. Officials of the group are trying to resolve a dispute with the United Arab Emirates over production quotas.Credit…via Reuters

Oil officials were trying Friday to resolve a dispute over quotas that prevented OPEC, Russia and their allies from reaching an agreement on raising production on Thursday.

Members of OPEC Plus, the oil producers’ group, are scheduled to meet again on Friday, but it may still be difficult to reach a deal, according to people familiar with matter.

A preliminary meeting of oil ministers broke up on Thursday when the United Arab Emirates insisted on what amounts to a substantial upward revision of its production quota in the event OPEC Plus extends its output agreement.

Before the meeting broke up, OPEC Plus was leaning toward moving ahead with a plan to increase production by a cautious 400,000 barrels a day each month for the rest of the year, beginning in August. Also on the table was a proposal to extend the current production agreement that expires at the end of April 2022 for the rest of next year. These changes are unlikely to be put in place unless the United Arab Emirates agrees.

Saudi Arabia and Russia, which have come to dominate the group, have argued that revising the quotas — the country-by-country rules governing how much oil the different countries are allowed to produce — would lead to chaos because other countries would also insist on new deals.

The tensions are an indication that increasing demand for oil, and rising oil prices, can test the cohesion of an organization like OPEC Plus. Producers like the United Arab Emirates and Iraq want to make sure that they don’t miss out on opportunities to sell more oil.

Since late last year, oil prices have risen about 85 percent as global economies have started to revive from the impact of the coronavirus pandemic. During this time, OPEC Plus has kept a tight leash on production.

So far the markets have largely shrugged off the dispute. Brent crude was only marginally down on Friday at $75.65 a barrel.

Specifically, the United Arab Emirates and other producers want changes in the crucial baselines for production that they were assigned last year when OPEC Plus reached a deal on output cuts to ride out the pandemic. These figures, from which quotas for most producers are calculated, are based on October 2018 production levels.

Analysts say that the United Arab Emirates has become increasingly frustrated with its position in OPEC Plus.

“They have made it very clear that their ambitions are to increase production, and they somehow think that no one is listening to them,” said Amrita Sen, head of oil markets at Energy Aspects, a research firm.

Stuart Joyner, an analyst at Redburn, a research firm, said that because of the heavy investment the United Arab Emirates had been making in oil production, it “does have a legitimate grievance.”

The Persian Gulf country, whose oil is almost entirely produced by Abu Dhabi, is taking a bigger hit — a reduction of close to one third of its capacity — than other OPEC Plus producers. 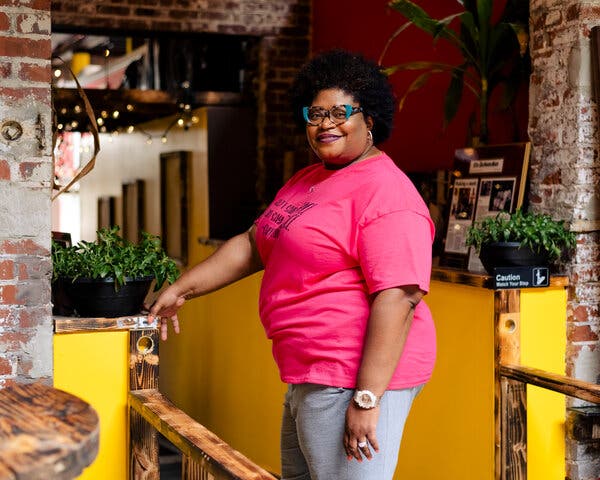 Tamra Patterson, the owner of Chef Tam’s Underground Cafe in Memphis, received funding in May. She immediately hired more workers and gave her employees a raise to $16 an hour.Credit…Whitten Sabbatini for The New York Times

More than 370,000 restaurants applied for more than $75 billion in funding from the Restaurant Revitalization Fund, nearly three times what the program had available. Around 105,000 businesses were approved for grants, which averaged just over $272,000.

The Small Business Administration, which runs the Restaurant Revitalization Fund, told unsuccessful applicants in an email that it was unable to fund all qualified applications because of “overwhelming demand.”

The restaurant fund, which opened in May, started off smoothly but was mired in turmoil in its final weeks, with thousands of grants rescinded because of policy changes and thousands more stalled by delays and glitches. Applicants awaiting decisions grew increasingly desperate as the remaining funding dwindled, Stacy Cowley reports for The New York Times.

When Congress created the restaurant fund in March as part of the Biden administration’s $1.9 trillion American Rescue Plan, it ordered the Small Business Administration to put a priority on funding for businesses owned by women, people of color and military veterans.

But with demand far outpacing the money available, that approach risked leaving all applicants outside the priority groups empty-handed. Several white business owners sued, and federal judges ruled that they were likely to succeed in proving their claims that the program’s policy violated the Constitution’s equal protection clause. In response, the S.B.A. ended the policy and rescinded the awards of nearly 3,000 priority applicants who had been told they would receive grants.

For those who got grants, the money was often a lifeline. Tamra Patterson, the owner of Chef Tam’s Underground Cafe in Memphis, received funding in May. She immediately hired more workers and gave her employees a raise to $16 an hour.

“This literally resuscitated my business,” she said. “This past year has been like sucking air through a straw in the middle of the ocean. This finally let us breathe.” 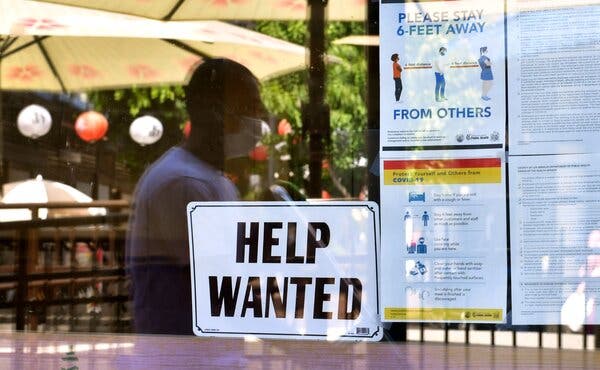 The pace of hiring has fallen below economists’ expectations for the last two months amid a bumpy economic recovery.Credit…Frederic J. Brown/Agence France-Presse — Getty Images

U.S. stock futures were slightly higher on Friday as traders awaited signs of how the American economic recovery was progressing from the latest monthly jobs report from the Labor Department. For the past two months, the pace of hiring has fallen below economists’ expectations amid a bumpy recovery.

Economists surveyed by Bloomberg expect payroll gains of 720,000, an increase from the 559,000 announced for May.

Investors will be watching the data closely as they try to work out how and when the Federal Reserve will begin to taper its pandemic stimulus measures. The central bank has a mandate to support full employment but also to keep prices stable. Recently, inflation has jumped because supply and demand have become mismatched as businesses reopen. Fed policymakers have said they believe rising price pressures to be temporary, but investors are wary of a change in policy stance.

The S&P 500 index is expected to open 0.1 percent higher when trading begins. This week, the index has risen 0.9 percent. The yield on 10-year U.S. Treasury notes fell two basis points, or 0.02 percent to 1.44 percent, the lowest level in three weeks. 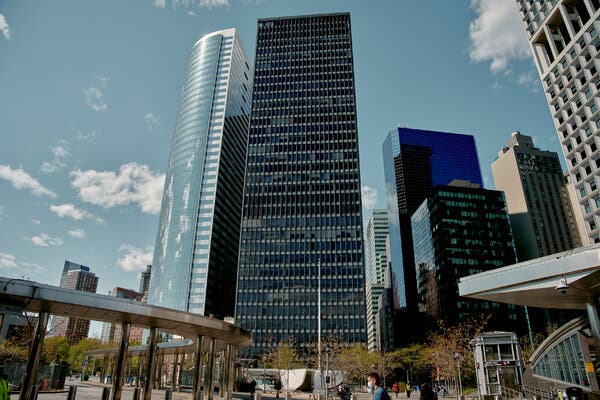 A third of leases at large Manhattan buildings will expire over the next three years, according to analysts, and companies have made clear they will need significantly less space. Credit…Vincent Tullo for The New York Times

Even as many companies bring workers back to their offices this summer, the amount of office space available for lease in Manhattan has soared to the highest rate on record.

Across Manhattan, home to the two largest business districts in the country, 18.7 percent of all office space is available for lease, a jump from more than 15 percent at the end of 2020 and more than double the rate from before the coronavirus pandemic, according to a report released on Thursday by Newmark, a real estate services company.

Some neighborhoods are faring worse, such as Downtown Manhattan, where 21 percent of offices have no tenants, the company said.

The overall availability rate is the highest since it started being tracked in the mid-1970s, when the city was facing a financial crisis and the Manhattan skyline was being transformed by the rise of towering office buildings like the Twin Towers at the World Trade Center.

Despite some positive economic indicators, companies in New York City continue to end their leases or offload them to other tenants at a steady pace, underscoring that the tremendous shifts in the way people work have already become a lasting legacy of the pandemic.

The real estate firm Savills said the Manhattan office market was not likely to rebound to prepandemic levels until “late 2022 or beyond.”

No city in the United States must confront the changing workplace more than New York, where offices before the pandemic attracted 1.6 million commuters every day and helped sustain a swath of the economy including shops, restaurants and Broadway theaters. The pandemic has also placed monumental pressure on the real estate sector, a pillar of the New York economy, as landlords have rushed to redesign offices and dangle incentives like lower rent to retain and attract companies.

But there are signs things could get worse for landlords. A third of leases at large Manhattan buildings will expire over the next three years, according to the real estate firm CBRE, and companies have made clear they will need significantly less space.

At the end of May, just 12 percent of Manhattan’s office workers had returned to their desks, according to a survey of companies by the Partnership for New York City, an influential business group. More than 60 percent of workers are estimated to return in September, the group said, but many companies will allow their employees to work remotely at least several days a week. 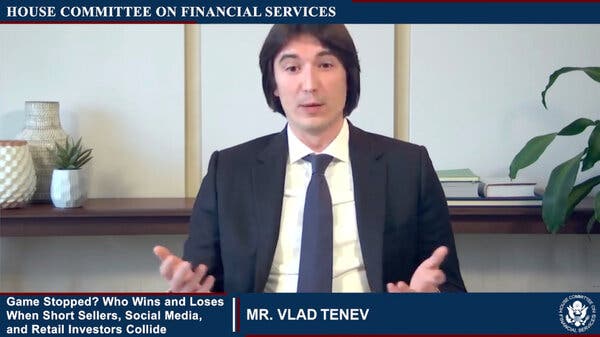