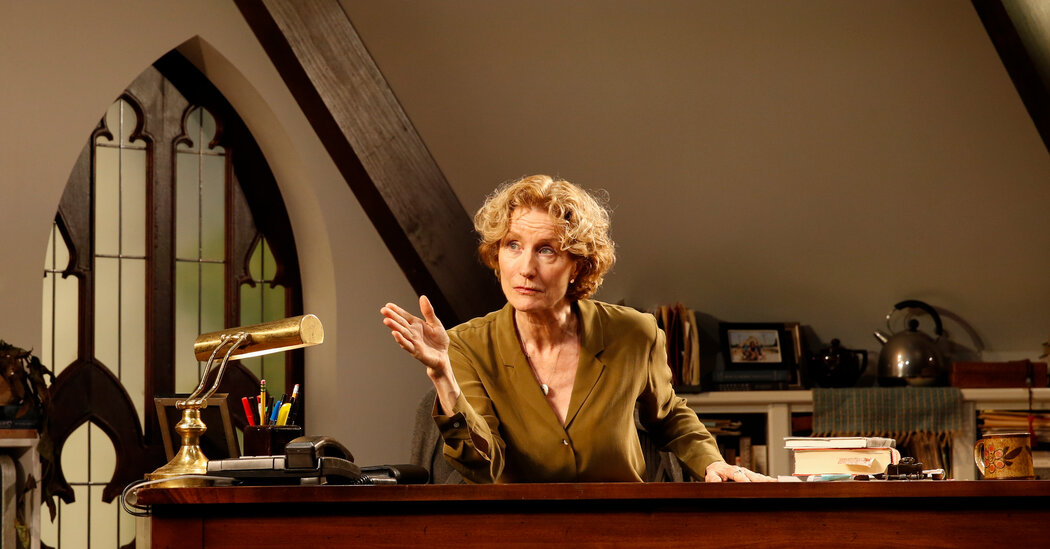 Lisa Banes, a versatile actress who rose to prominence on the New York stage in the 1980s and enjoyed a brisk career that included roles on television and in the films “Cocktail” and “Gone Girl,” died Monday of head injuries suffered 10 days earlier when she was hit by a scooter in Manhattan. She was 65.

Her death at Mount Sinai Morningside Hospital was confirmed by New York police, who said she was hit by the scooter while crossing Amsterdam Avenue near West 64th Street in Manhattan on June 4.

The scooter driver went through a red light before colliding with Ms. Banes and then fled, said Sgt. Edward Riley, a police spokesman. There were no arrests, he said on Tuesday.

Known for her ironic humor and her confident, elegant presence, Ms. Banes has appeared in more than 80 television and film roles as well as in countless stage productions, including on Broadway.

She quickly enjoyed theater success after moving east from Colorado Springs in the mid-1970s and studying at the Juilliard School in New York.

In 1980, when the Roundabout Theater revived John Osborne’s “Look Back in Anger,” starring Malcolm McDowell in the lead role of angry Jimmy Porter, she played his stressed-out wife.

“Lisa Banes has a remarkably effective closing scene,” wrote Walter Kerr in the New York Times, “on her knees with fear, face full of failure, arms clumsy in search of form and calm.”

The next year she starred at the Long Wharf Theater in New Haven, Connecticut, in a production of the James M. Barrie comedy “The Admirable Crichton,” in which she played an upper-class daughter who was shipwrecked on an abandoned island.

“As Lady Mary,” wrote Mel Gussow in his review in The Times, “Lisa Banes has a royal disdain. She plays the grande dame gracefully, and with appropriate agility she becomes a kind of Jane of the Jungle, swimming rivers and swinging on vines – a rather far-fetched transformation that this impressive young actress accomplishes with verve. “

Off-Broadway roles kept coming back. Later in 1981 she and Elizabeth McGovern starred in Wendy Kesselman’s “My Sister in This House” on Second Stage. In 1982 she was the sister Olga in Chekhov’s “Three Sisters” at the Manhattan Theater Club, part of a star cast that included Dianne Wiest, Mia Dillon, Jeff Daniels, Christine Ebersol and Sam Waterston.

In 1984, when Ms. Banes was in the middle of a run in Wendy Wasserstein’s comedy “Isn’t It Romantic” on Playwrights Horizons, the Times named her one of 15 stage actresses to see. She was nominated for a Drama Desk Award for her performance in this play.

Join The Times theater reporter Michael Paulson in conversation with Lin-Manuel Miranda, watch a performance of Shakespeare in the Park, and more as we explore the signs of hope in a changed city. For a year now, the “Offstage” series has accompanied the theater through a shutdown. Now let’s look at his recovery.

She made her Broadway debut in 1988 in the Neil Simon comedy “Rumors” and returned in Tom Stoppard’s “Arcadia” (1995), a revival of the Arthur Kopit-Cole-Porter musical “High Society” (1998) and one Revival of Noël Coward’s “Present Laughing” (2010).

One of her last stage appearances was in 2018 at the Huntington Theater Company in Boston, where she starred in the premiere of Eleanor Burgess’ “The Niceties,” a drama in which her apparently progressive, lesbian professor competed against a young woman, Black College student played by Jordan Boatman.

Don Aucoin, who reviewed the production on The Boston Globe, praised its accomplishments, saying, “They both find the nuances in their characters and convey the occasional cracks in their apparent certainty.”

As Ms. Banes established herself in the theater, Hollywood also called. Her first film role was in “The Hotel New Hampshire,” Tony Richardson’s adaptation of the John Irving novel, and she appeared frequently on television, including regular roles in “The Trials of Rosie O’Neill” in the early years 1990s and more recently “Royal Pains”, “Nashville” and the space comedy “The Orville”.

“Her stage presence, attraction, skill and talent were only matched by her unwavering kindness and grace,” said Seth MacFarlane, creator and star of “The Orville,” on Twitter.

On the big screen she played Tom Cruise’s arrogant older friend in “Cocktail” in 1988 and the vicious mother of a missing woman with Ben Affleck and Rosamund Pike in David Fincher’s “Gone Girl” (2014).

Lisa Lou Banes was born in Cleveland on July 9, 1955. Her father Ken worked in advertising and her mother Mary Lou (Shalenhamer) Banes was a model.

Lisa grew up in Colorado Springs, where she focused on acting from an early age. Her first paid job, she told The Gazette of Colorado Springs in 2014, was acting at a dinner theater in nearby Manitou Springs.

In addition to Frau Kranhold, she has a brother, Evan Sinclair; and her stepmother, Joan Banes.

In the 10 days after the accident, actors and playwrights who worked with Ms. Banes expressed their support and shock at what happened.

Ms. Burgess, who wrote “The Niceties,” said she was with Ms. Banes just before the scooter hit and described her as a “brilliant, lively, wonderful woman.”