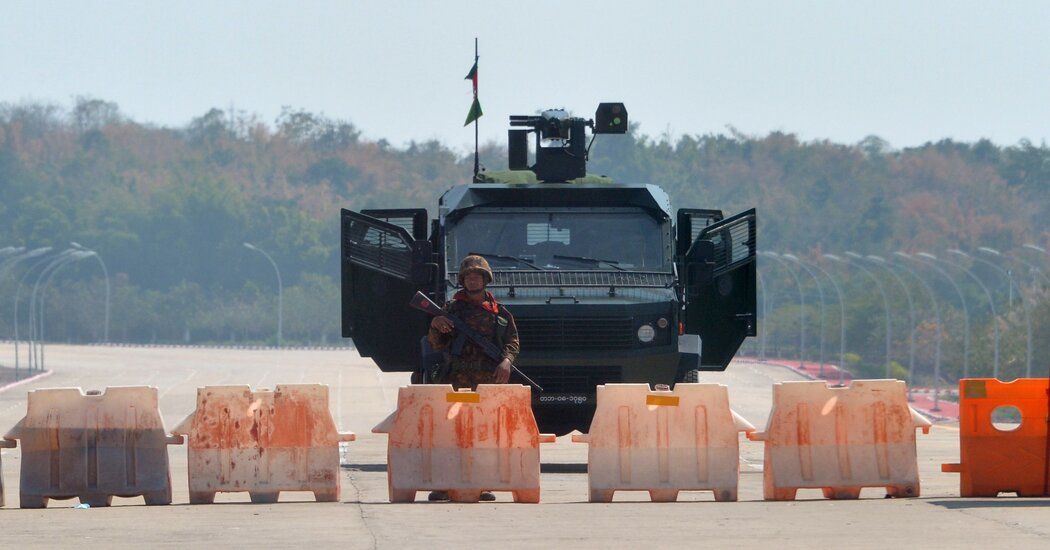 The Myanmar military overthrew the country’s fragile democratic government in a coup on Monday, arrested civilian leaders, shut down the internet and cut flights.

The coup is bringing the country back to full military rule after a brief period of quasi-democracy that began in 2011 when the military, in power since 1962, conducted parliamentary elections and other reforms.

What led to the military coup in Myanmar?

Parliament was due to hold its first session this week since the November 8 elections, in which the National League for Democracy, the country’s leading civil party, won 83 percent of the panel’s available seats.

The military refused to accept the results of the vote, which was widely viewed as a referendum on Daw Aung San Suu Kyi’s popularity. Ms. Aung San Suu Kyi, the head of the NLD, has been the de facto civilian leader in the country since taking office in 2015.

The possibility of a coup has arisen in the last few days. The military, who tried to argue before the country’s Supreme Court that the election results were fraudulent, threatened “action” and surrounded the houses of parliament with soldiers.

How was the coup carried out?

The military on Monday arrested the leaders of the ruling NLD party and the civilian leadership of Myanmar, including Ms. Aung San Suu Kyi and President U Win Myint, as well as cabinet ministers, prime ministers of several regions, opposition politicians, writers and activists.

The coup was effectively announced on the military television network Myawaddy when a news anchor quoted the 2008 constitution, which allows the military to declare a national emergency. The state of emergency will last for a year.

The military reportedly quickly took control of the country’s infrastructure, ceasing most of the TV shows and reportedly canceling all domestic and international flights.

Telephone and Internet access have been suspended in major cities. The stock exchange and commercial banks were closed, and there were long lines in front of ATMs in some places. In Yangon, the country’s largest city and former capital, residents ran to markets to get food and other supplies.

Who is Aung San Suu Kyi?

Her rise to leadership was seen as a critical moment in the transition of Myanmar, formerly known as Burma, to democracy from military dictatorship. Ms. Aung San Suu Kyi, the daughter of the country’s independence hero General Aung San, has been under house arrest for more than 15 years.

Her imprisonment made her an international icon and she was awarded the Nobel Peace Prize in 1991.

Since her release, her reputation has been tarnished by her collaboration with the military and vociferous defense of the country’s deadly campaign against the Rohingya, a Muslim ethnic minority. In 2019 she represented the country in a trial before the International Court of Justice in which she defended Myanmar against allegations of ethnic cleansing.

Many believed Ms. Aung San Suu Kyi’s collaboration with the military was a pragmatic move that would accelerate the country’s development towards full democracy, but her detention on Monday seemed to prove the lie in the military’s commitment to democracy.

The military said it had given power to the army chief, Maj. Gen. Min Aung Hlaing.

The move extends the power of General Min Aung Hlaing, who is slated to die out as army chief this summer. His patronage network, which focuses on lucrative family businesses, could have been undermined by his retirement, especially if he hadn’t been able to secure a clean exit.

The military never fell under the control of the civil government. In recent years, the army, headed by General Min Aung Hlaing, has been overseeing campaigns against several of the country’s ethnic minorities, including the Rohingya, Shan and Kokang.

What is the international reaction to the coup?

Several great world leaders quickly condemned it and urged the Myanmar military to immediately release Ms. Aung San Suu Kyi and the other detained government officials and to honor the November election results. However, it was not immediately clear what specific measures other nations might take, if any.

The Biden government, which has tried to raise human rights as a foreign policy priority since it took office less than two weeks ago, proposed punishing Myanmar’s military hierarchy with unspecified sanctions.

“The United States rejects any attempt to change the outcome of the recent elections or impede democratic transition in Myanmar and will take action against those responsible if these steps are not reversed,” the White House said in a statement.

António Guterres, Secretary General of the United Nations, said the coup developments were “a heavy blow to the democratic reforms in Myanmar”. British Prime Minister Boris Johnson said on Twitter that “the referendum must be respected and the civilian leaders released”.

China, which shares a 1,300-mile border with Myanmar and is one of the country’s largest investors, responded cautiously to the coup and maintained cordial relations with both Ms. Aung San Suu Kyi and the military hierarchy who arrested her.

“China and Myanmar are friendly neighbors. We hope that all parties will handle their differences appropriately within the constitution and legal framework in order to maintain political and social stability, ”said Wang Wenbin, a spokesman for the Foreign Ministry, at a regular press conference in Beijing on Monday.

Last month, Myanmar was the first stop on a regional goodwill tour by Chinese Foreign Minister Wang Yi, who pledged to provide a Chinese-made coronavirus vaccine to Myanmar free of charge.

Rick Gladstone contributed to the coverage.