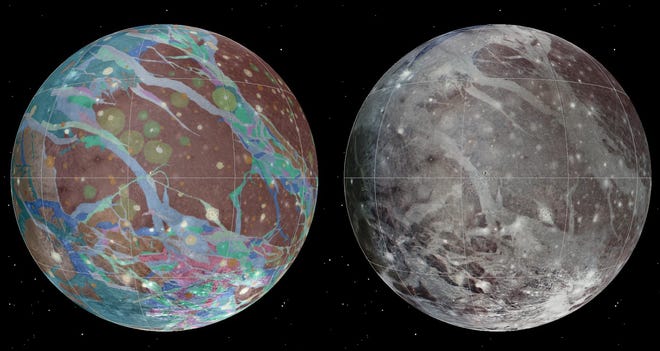 On Monday afternoon, NASA’s Juno spacecraft will come within 645 miles of Ganymede, the largest moon in the solar system.

The flyby will be the closest to Ganymede since NASA’s Galileo spacecraft passed by on May 20, 2000.

“Juno carries a number of delicate instruments that Ganymede can see in unprecedented ways,” Juno principal researcher Scott Bolton of the Southwest Research Institute said in a statement.

“By getting this close, we will bring Ganymede exploration into the 21st century, both complementing future missions with our unique sensors, and helping prepare the next generation of missions to the Jovian system,” he said.

Together with impressive images, the solar-powered space probe’s flyby will provide insights into the composition of the moon, ionosphere, magnetosphere and ice shell.

Back to the ‘greenhouse’:NASA announces two upcoming missions to explore the planet Venus

Ganymede is larger than the planet Mercury, according to NASA, and the only moon in the solar system with its own magnetosphere – a bubble-shaped region of charged particles that surrounds the moon.

Jupiter’s massive moon will be a primary target of the European Space Agency’s Jupiter Icy Moons Explorer mission known as JUICE, which is scheduled to launch next year and arrive in the Jupiter system in 2029, according to Space.com.

It’s going to be a busy day for Juno, said Matt Johnson, Juno Mission Manager of NASA’s Jet Propulsion Laboratory: “On Monday we will be speeding past Ganymede at nearly 12 miles per second. Less than 24 hours later, we’re doing our 33rd Science Pass of Jupiter – screeching low above the cloud peaks, at about 58 miles per second.

“It’s going to be a wild ride,” said Johnson.