While all eyes are on the COVID-19 vaccine, the more dangerous variants of the virus are increasingly dominating.

In Washington State, the British variant B.1.1.7 and two closely related variants first identified in California have quickly overtaken other strains. While the state only has rough estimates of the relative proportions of each variant, the British and California variants each make up about a third of the infections. The original virus and other variants make up the remaining third. Other states see similar trends.

As the number grows, an effort by PATH, a nonprofit global health organization, is helping prevent the most worrisome varieties from escaping detection.

The Seattle-based organization recently released a tool that summarizes information about the ability of COVID tests to identify infections, regardless of the level of exposure a person is facing. PATH researchers have manually collected data on hundreds of tests from dozens of manufacturers to make it easier for people to evaluate the diagnostic tools available. For most tests, very limited information is available on how they behave against variants. 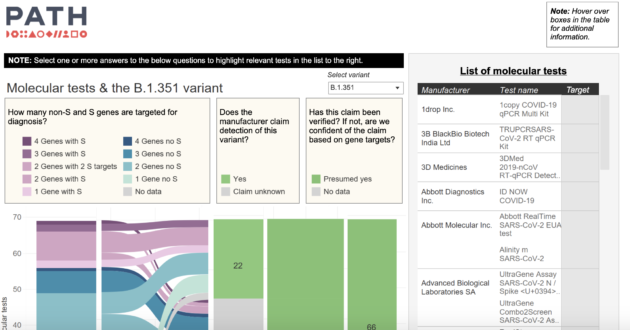 PATH’s dashboard shows the impact of variants on detection of COVID-19 molecular tests.

The variant-oriented database is part of a more comprehensive COVID diagnostic platform developed by PATH with the support of the data visualization company Tableau. It contains information about the performance of a test, where it was manufactured and approved for use, and whether it is commercially available.

PATH, a global health justice organization, developed the platform primarily for governments and policymakers, especially for countries in lower-income countries.

While much of the attention in the United States has been on American infection and vaccination rates, health professionals are reminding people that COVID is a global problem. The original virus and many of its most problematic variants occurred outside of US borders. It is critical that other countries be able to track and protect against the disease in the interests of their own residents and for global control of COVID.

“COVID is not going away. It is highly believed that it is a flu-like endemic virus, ”said Lorraine Lillis, PATH’s scientific program officer for diagnostics. “So we need a diagnosis to continuously monitor, diagnose and see what it is doing.” 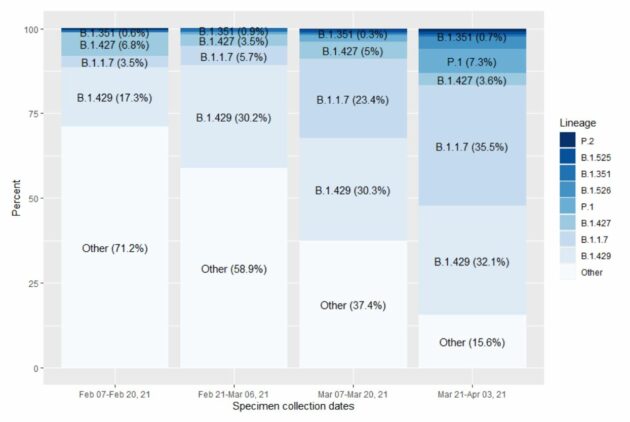 The Washington State Department of Health is sequencing COVID-19 cases to track the dominance of problematic variants. These include B.1.1.7 (the British variant) and two variants from California with similar mutations: B.1.427 and B.1.429. The samples that are sequenced are not intended to accurately capture the mix of variants in the state. (DOH picture, click to enlarge)

The PATH researchers hope that their work will help highlight smaller, lesser-known diagnostic manufacturers to bring diversity to market, and that it will encourage test makers to exchange data on their performance for variants.

There are two approaches to testing for COVID: rapid antigen tests, which do something like a pregnancy test and look for bits of virus; and molecular tests that use PCR (polymerase chain reaction) to detect even small amounts of the virus’ genetic material.

By the end of March, the US Food and Drug Administration had identified four molecular tests “whose performance could be affected by mutations in some of the affected variants.” The tests contain several goals to protect yourself from such problems. Therefore, they should still capture positive cases. With so many tests available and more in the market, it can be difficult to know which ones work best.

“There’s just a lot of confusion,” said Neha Agarwal, PATH’s assistant director of diagnostics. “We didn’t build any kind of data aggregator, so we just felt the need to fill that gap.”

In addition to the diagnostic tests, the researchers also take a subset of positive COVID samples and sequence the entire genetic code of the virus. That way, they can identify which variant is present and identify new mutations.

Washington state is a leader in sequencing, screening nearly 11% of positive COVID samples in March. While the samples selected for sequencing are not intended to perfectly represent the mix of variants in the state, it is easy to see that the variants expand over time. For example, variant B.1.1.7 was only present in 3.5% of the cases examined in early to mid-February. By the end of March, it was responsible for 35.5% of the infections sequenced.

Compared to the original COVID virus, B.1.1.7 is about 50% more transmissible and is likely to cause more severe infections. Early research suggests that vaccines should still perform well against it.

“So far, the tests have dealt with the affected variants. [but] It’s still something to be vigilant about, ”Lillis said. “These viruses can mutate so easily. Whenever you develop a test, you want to be able to identify as many variations as possible. “