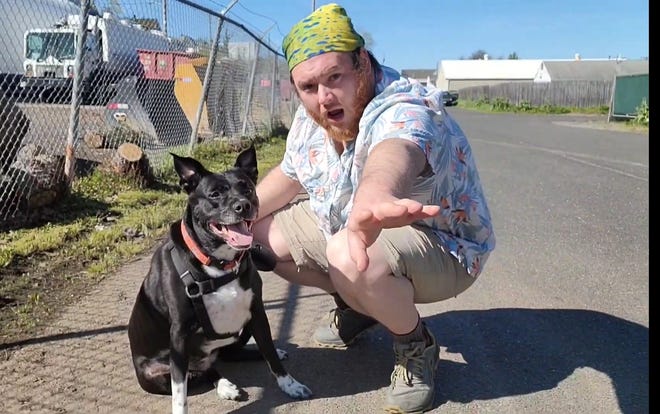 SANDY HOOK, NJ – Sam Green and his dog Taylor Ham left one of their favorite walks on Sandy Hook Beach on May 14 and headed west.

Two and a half months – and more than 500 miles later – they are still on the road.

Taylor Ham walks “a mile or two” a day, but most of the time Green is pushing her in a dog jogger stroller. He fitted the stroller with three rechargeable fans to keep them cool.

It also serves as a unique fundraiser for Just Believe Inc., a New Jersey-based charity that operates a local Code Blue shelter for the homeless and raises funds to build Jeff’s Camp, shelter for homeless veterans.

“The dog and I are slowly making our way west,” Green said in a recent interview while walking down a street outside of Dayton, Ohio. “We are getting there step by step.”

Green also used the top of a shoe rack he got at Walmart and attached it to the top of the cart. Inside are his clothes, a grocery bag that holds food for three to four days, and his electronics, including a storage lamp, laptop, and phone.

He’s tied three tripods to his cart, which is topped with an American flag and umbrella, and posts updates on his YouTube channel on Mondays, Wednesdays, and Fridays.

He said they walk at least 15 miles a day “unless it’s a really bad day, really mountainous,” and they have deviated from the direct routes for sightseeing.

The furthest distance they traveled in a day: 35 miles.

Paul Hulse, President and CEO of Just Believe, said Green’s walk inspired him and the many volunteers who work with the organization.

“The coolest thing for us is that it’s such an inspiration to us,” said Hulse. “I have volunteers who have been doing this for six years, seven years. When you see someone doing that, you work so much harder. It’s just great. “

Having decided to write about homelessness, he learned that Ocean County is the only county in the state that does not have year-round transitional housing for the homeless.

Just Believe worked with district officials and local councilor Terrance Turnbach to find land for potential housing that Just Believe could own and operate.

Before starting this hike, Green quit his job just before the pandemic to hike the entire 2,190 mile Appalachian Trail. He had traveled 250 miles when the pandemic broke off its path.

In New Jersey and eastern Pennsylvania, he and Taylor Ham mostly stayed in “cheap hotels or motels,” but once they got deeper into Pennsylvania, the two of them mostly camped out for the night.

The heat was an issue throughout the walk, during a summer that was scorching hot in many parts of the United States. Temperatures in the mid to late 1990s have occasionally slowed Green down.

On the way, however, he said he found mostly friendly people to talk to. He has also met many other people who cross the United States by bike or on foot.

“There are so many people who cross the country in different ways,” said Green. “There’s a guy in Arizona right now who wears a bear suit when he walks.” The bear-clad hiker is raising money for St. Jude’s Children’s Research Hospital in New York, he said.

His “beach dog” has gotten used to life on the street well, although Green said he was concerned about the heat he would experience in the desert to the west. “I could let Taylor stay with my family while I walk through the desert,” he said. I don’t want to put them in danger. “

Hulse said he thinks Green learned a little more about homelessness from his time on the street.

“It was just great to watch him see what he went through,” said Hulse of watching the YouTube videos. “The police told him to keep moving; just hearing these things is all I know from working in the homeless community.”