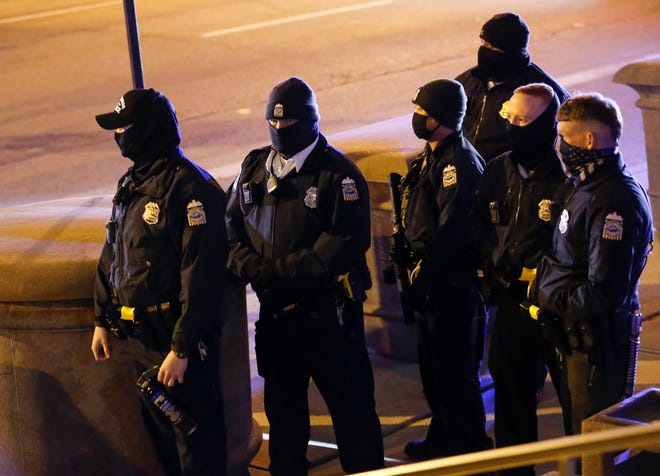 COLUMBUS, Ohio – The U.S. Department of Justice has not formally announced whether they will review the Columbus Division of Police for racial bias as requested late last month by Mayor Andrew J. Ginther and City Attorney Zach Klein.

The move has been criticized by Jeff Simpson, executive vice president with the Fraternal Order of Police Capital City Lodge No. 9, who said “officers have been relentlessly condemned and demonized even when the officer’s actions are consistent with training and the law.”

But community activists and faith leaders say they welcome a Department of Justice review and hope it will involve a broader look at the division and lead to a federal consent decree.

What is a consent decree?

A consent decree is a “court-approved agreement on what reforms the agency will take and what kinds of timelines for those reforms,” said Dennis Kenney, a Washington based professor at the John Jay College for Criminal Justice in New York City.

Kenney has worked as a police officer and consultant for multiple police agencies, as well as serving as the associate director and director of research at Police Executive Forum, a nonprofit research organization focused on issues of policing.

In 1994, Congress gave the Justice Department the power to address a pattern and practice of police misconduct within departments and to sue cities for civil relief. Consent decrees can involve any government agency, but are most commonly used with police departments.

Since that time, how many investigations and decrees are started each year has become somewhat political.

The Justice Department under the Donald J. Trump administration opened only one investigation into a police department in four years and did not enter into any consent decrees. The Justice Department also withdrew from potential decrees in Baltimore and Chicago that had started being negotiated under Obama.

How do consent decrees work?

If an investigation by the civil rights division of the Department of Justice finds there are patterns or practices of unconstitutional policing, there are two primary options for resolving those, Kenney said.

One option is the city, the police department and the DOJ enter into a voluntary agreement where they determine what changes need to be made and a timeline for implementation, or the Department of Justice can issue a consent decree requiring the department and city to implement specific changes.

Ayesha Bell Hardaway, an assistant professor of law at Case Western Reserve University, who has researched policing, civil rights and consent decree litigation, said that when the agreement is voluntary, the filing of a lawsuit and settlement agreement often happen in close proximity to one another to show collaboration.

“It’s a signal to the community — and to the court — that it isn’t going to be actual litigation but it’s going to be worked out through this settlement,” Hardaway said.

If a settlement is going to be voluntary, Kenney said it’s best to have people at the negotiating table from all sides.

“It would be more problematic if the chief says they’d need to change this and the union says it would fight it tooth and nail.”

In Columbus, tensions between the police union and the city leadership have been high as contract negotiations remain ongoing. Ginther has stated on multiple occasions that the union has to accept reforms because that’s what the people of Columbus want.

Simpson said in a statement after the announcement of the request for a review by the Justice Department that the local Fraternal Order of Police is willing to work with “any entity to improve policing.”

“Politicians constantly vilifying officers breeds contempt for authority, emboldens the criminal element and has led to a mass exodus of law enforcement officers from the profession,” he said.

Simpson also cited the homicide rate in Columbus, which as of Thursday stood at 66, a number not recorded until July 2020 — the deadliest year in the city’s history.

The other option, which Kenney said happens when there is resistance to the findings of the Justice Department’s review, involves a court order forcing the changes upon a department.

How would a decree be enforced?

Kenney said an agreement with the Department of Justice — whether voluntary or a consent decree —would be able to be enforced if the police department refused to implement changes.

“If it’s voluntary and they fail to live up to it, the civil rights division would sue them and convert it to a consent decree,” Kenney said.

A federal judge will either monitor the progress of the consent decree implementation themselves or appoint a monitor who will make occasional progress reports to the court.

The judge could take steps that she or he felt were necessary to make sure the consent decree was followed, including monetary fines, contempt-of-court charges or even removing a police chief, Kenney said. The judge would also have the ability, if the resistance came from the police union, to dissolve the union. That has never happened, to Kenney’s knowledge.

“The power of the consent decree is you don’t really have a choice,” he said.

What will happen in Columbus?

Instead, following objections in 1999 from the Fraternal Order of Police and Mayor Michael Coleman’s entrance into office in 2000, the city addressed several reform measures, including adding dash cameras, increasing training and retooling the process for citizens filing complaints. Those changes resulted in the lawsuit being dismissed in 2002.

Coleman said that federal oversight of city police at that time wasn’t necessary.

“The issues then are different than those today – we were dealing with racial profiling, not fatal shootings,” Coleman said. “And the Justice Department agreed with us (then) that we had taken the steps necessary to deal with these issues.”

Coleman’s efforts to avoid the consent decree were supported at the time by then-Columbus City Attorney Janet Jackson, who was recently approved as one of 11 members of the city’s first Civilian Police Review Board.

The efforts of Coleman and Jackson were mentioned as one of the concerns of a group of activists who came together last week to request a Department of Justice investigation. The group, called the Community Police Action Project (CPAP), said the lack of a decree has allowed Columbus police to avoid consequences for failing to enact reforms.

Sean Walton, a local civil rights attorney who is one of the leaders of CPAP and has represented families of people killed by law enforcement, said during a  news conference on April 29 that anything short of a consent decree in Columbus would be unacceptable.

“The only cooperation we want from the mayor’s office is to step back” and let the Justice Department investigate,” Walton said.

What are the concerns with the consent decree?

Historically, police officers in departments who have been involved in consent decrees have expressed concern about crime going up and police authority being taken away to protect the communities they serve.

“New York had its big deal with stop and frisk,” he said. “If that were outlawed and the city did outlaw it, there was a great deal of hand-wringing about not being able to stop the bad guys. The research said it had no productive value but it did damage the relationship with the community.”

A 2009 study conducted by researchers from Harvard University looked at the Los Angeles Police Department nearly 10 years after a consent decree was enacted in that city. The researchers found that there was increased public satisfaction with the police, as well as decline in the “use of serious force.”

Police officers in Los Angeles expressed concerns in surveys and interviews with the research team that they would be limited in their ability to enforce the law under the consent decree for fear of having a complaint filed against them. Despite those concerns, the researchers found an increase in the number and quality of traffic stops conducted.

The study also noted a decline in crime during the same period of time, which coincided with a national decrease in homicides.

“The kinds of changes that are made are changes that facilitate police-community collaboration,” Kenney said. “The rub generally is that it removes the autonomy of the management of the police department to make decisions as they see fit, and it becomes really problematic when it clashes with the culture of the department. Culture is more difficult to change than policy.”

Bell Hardaway said there are some concerns about the long-term sustainability of changes imposed under consent decrees.

“It’s not because the reform measures aren’t good,” she said. “So much of the work is rooted in culture shifts in a department” and the “concerted efforts and strong philosophies of elected and appointed officials. Any change in that dynamic … you can see old habits re-emerge.”

Bell Hardaway said there needs to be more research done to determine the lasting impact of consent decrees and reform.

“We’ve all witnessed cities who we thought were making good strides toward progress and reform devolve into bad habits and revert back,” she said, citing the actions of Portland and Seattle police during protests over the last year.

Kenney said there are costs associated with consent decrees, but generally, those costs are a reallocation of spending that was already being done in other areas and not additional spending.

“It’s not going to be free to the city, but it’s not an onerous burden either,” Kenney said of a consent decree.

Whether any changes that are enacted as a result of any potential DOJ investigation have long-term impacts is largely a product of the open-mindedness of officers, the experts said.

“The key thing in this whole process is the voluntariness of the police department,” Kenney said. “Are they receptive to what’s being done or are they resistant to what’s being done? That makes all the difference in the world about the changes and how they’re made and how long-lasting they are.”