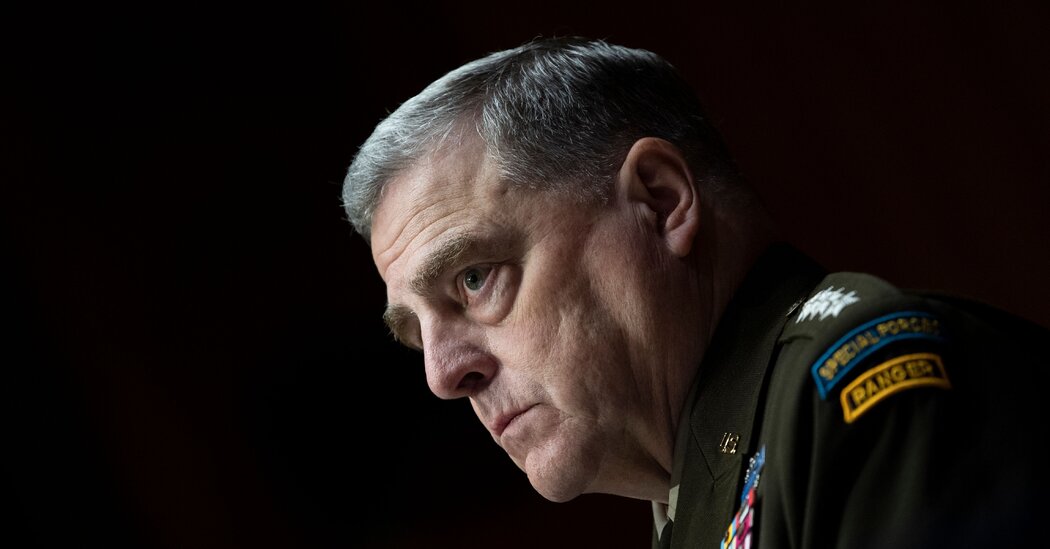 This month, the first series of books on the end of Donald Trump’s administration sparked speculation: Was the President planning to stay in power through some sort of coup?

The question arose because Washington Post reporters Carol Leonnig and Philip Rucker, in their book, I Alone Can Fix It, report that General Mark Milley, chairman of the Joint Chiefs of Staff, saw the president’s post-election maneuvers in this light.

General Milley had no direct evidence of a coup plan. But in the days following Mr. Trump’s electoral defeat, when the president filled senior military and intelligence posts with what the general considered loyal mediocrity, General Milley grew nervous. “You can try,” but they would not succeed with any type of conspiracy, he told his aides, according to the book. “It won’t work without the military,” he continued. “You can’t do that without the CIA and the FBI. We’re the guys with the guns.”

While some may welcome such comments with relief, General Milley’s thoughts should stop us. Americans have typically not turned to the military for help regulating their civilian policies. And there is something great about General Milley’s idea of ​​his place in government. He told his aides that on election night a “retired military buddy” called him to say, “You represent the stability of this republic”. In the absence of a coup, General Milley’s comments might be more of a cause for concern than relief.

Were we really that close to a coup? The most dramatic and disturbing episode of Mr Trump’s opposition to the election was January 6, and the events of that day are ambiguous.

On the one hand, one can hardly imagine a more serious attack on democracy than a forcible entry into a nation’s capital to overturn the election of its chairman. Five people died. Singing protesters called for the execution of Vice President Mike Pence, who had turned down Mr Trump’s request to reject certain votes for Joe Biden.

On the flip side, January 6 was something familiar: a political protest that got out of hand. To contest the fairness of an election, rightly or wrongly, is not an absurd reason for a public gathering. For a newly defeated president, it is certainly irresponsible to call an election a “steal”. But for a group of citizens it was only hyperbolic to use the term, perhaps no more than to refer to suboptimal labor and health laws as a “war on women”. The eventual violence did not necessarily discredit the protesters’ cause, nor did the murder of five police officers in a July 2016 anti-police violence rally in Dallas allay their concerns.

The stability of the republic never really seemed threatened. As Michael Wolff writes about Mr. Trump in his new book Landslide: The Final Days of the Trump Presidency, “There was no skill – or structure, or chain of command or process or expertise or a person who You have to call – to get things done. ”Mr. Trump ended his presidency with no more authority than he did with his responsibilities. That’s reassuring in a way.

The problem is that Trump’s unfocused stolen election theory was distilling and concentrated radical tendencies – first among his associates and later among his supporters nationwide. Rational voices left his inner circle. After Attorney General William Barr told reporters he was unaware of any evidence of widespread election fraud, he was out. Rudolph Giuliani was there, along with a changing line-up of less stable freelancers, including lawyer Sidney Powell, with her theories about selector switches and Venezuelan cunning. Now the President was not only thinking badly; he did the same with poorer information. That was the first distillation.

The effect of the president’s theory on disappointed voters was more complicated. Republicans had – and still have – legitimate complaints about the conduct of the last election. Pandemic conditions resulted in a more favorable electoral system for the Democrats. Without the benefit of the Covid-era expanded mail-in voting, the Democrats could have lost more elections at all levels, including the presidential election. Mr. Wolff writes that, from the Republican point of view, the Democrats “were saved by this happy emphasis; that was all she saved. “

It wasn’t all luck either; It was beneficial that the Democrats at certain points manipulated the system to get it. The majority Democratic Pennsylvania Supreme Court ruled in favor of a lawsuit brought by the Democrats to extend the postal vote beyond election day.

Whether the country should now return to pre-Covid voting rules is a legitimate discussion. But Trump’s conspiracy thinking led to another “distillation,” this time among supporters of the perfectly rational thesis that electoral laws had been inappropriately changed to favor the Democrats. (To say that the proposal is rational does not mean that it is undeniably correct.) Those who advocate this idea in a moderate way seem to have constantly disconnected from Mr. Trump. On January 6, the reason for skepticism about the election remained unchanged. But they were being pushed by an angry and very unrepresentative hard core.

The result was not a coup. Instead, it was chaos in the name of what had started out as a legitimate political position. Such mixtures of the acceptable and the untenable occur more frequently in democracies than we would like to admit. The question is who do we trust to unravel such ambiguities when they arise?

For all Mr. Trump’s admiration for officers, they ended up being particularly reluctant to live up to his disorderly style of government. General Milley wasn’t alone. Think of retired generals like National Security Advisor HR McMaster and Secretary of Defense James Mattis, both of whom broke with Trump at the start of his term in office.

We may be grateful for that. But our gratitude should not extend to assigning military leaders any role in judging civilian leaders.