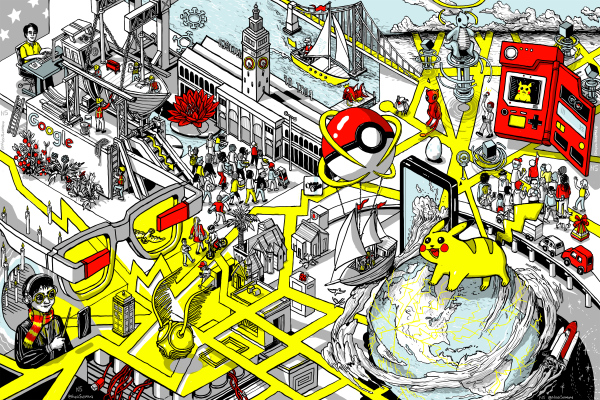 Hello friends! Lucas always starts with that, doesn’t it?

Lucas is out for a couple of weeks so I’ll take care of Week In Review until he gets back. TL; DR about me: I’m Greg and I’ve been with TechCrunch for a very long time. I joined around the time that Twitter found the vowels in its name and people thought Facebook’s valuation was ridiculously high at $ 15 billion. (For reference, Facebook’s market cap exceeded $ 1 trillion last month.)

Enough about me! Would you like this in your inbox every week? Login here. Oh and by the way, Sarah Perez’s popular This Week in Apps column is now a weekly newsletter. Sarah rules and does a hell of a job putting together everything you need to know about the world of apps.

And now, here’s a quick rundown of what you might have missed this week.

While Zoom has been around since 2011, growth in 2020 was just at an entirely different level. The pandemic blasted Zoom into the product name’s hall of fame as a verb practically overnight, adding “Let’s zoom next week” to the ranks of “Xerox this for me?”. or “Photoshop it” or “Google it”.

With rapid growth, of course, there are also growing pains.

Among that pain was a marked increase in trolling. The idea of ​​”zoom bombing” was born where unauthorized participants crash a Zoom call and flood it with nasty pictures, hate speech, and anything else they can say before the moderator (who is often unfamiliar with Zoom’s user interface is) figuring out how to lock it.

By April 2020, Zoom had adjusted its settings to make meetings a little less zoombomb-enabled by default – but by then a lawsuit had already been filed. In fact, fourteen lawsuits were filed and later merged into one. The lawsuits argued that the company had not done enough to prevent zoom-bombing, as well as disclosing user data to third parties without the user’s permission.

This week Zoom agreed to a $ 85 million deal, along with a promise to add even more protections against would-be crashers. It’s an interesting example of how massive / sudden popularity can create whole new problems … but considering that Zoom’s market cap has increased from $ 34 billion in March 2020 to $ 118 billion since this week, doubt it I think anyone there is too depressed.

Google gives a preview of the Pixel 6

Google’s next Android flagship is coming! When? TBD. How much? Good question! The company withheld an unusual number of details in its first official recognition of the Pixel 6’s existence, presumably to focus on the custom AI-centric system on a chip they build for it. We know it has a big old camera belly (or “camera bar” as they call it) and there will be two models (Pixel 6 and Pixel 6 Pro). But beyond that, we’re relying on leaked specs for now. Fortunately, so far these leaks have been pretty accurate.

Robinhood went public this week – and perhaps fittingly for the app available at GameStop / AMC / etc. meme stock bonanza earlier this year, the first few days of trading were something of a roller coaster ride. It opened at $ 38, slipping on the first day to climb to $ 70 on the second day. As I write this, it is slowly going back down to earth with a current price of about $ 53. As for the root cause of volatility … as Alex Wilhelm put it: “This will happen in 2021; We just have to get used to it. “

Since the basic concepts of Pokémon Go (talk to strangers! Hang out in large groups!) Don’t work so well in a pandemic, Niantic tweaked a few things last year to make the game more playable from home. Among other things, they’ve increased the real-world radius that players can interact with in-game landmarks so you can do more while moving less. This week they started rolling back those changes as a “test” … and, well, people are insane. The company may have some data-driven reasons to go back … but from the outside, it just looks like a bad decision given the ongoing pandemic. Niantic has responded to the turmoil in the community by forming an internal team to review the options and are promising updates by September 1st.

This week WhatsApp embraced its inner Snapchat with the introduction of the “View Once” mode, which allows users to send photos and videos that can be viewed once before self-destructing. Be aware, however, that you probably don’t want to use it to send those top secret documents (and / or butt pictures); Unlike Snapchat, WhatsApp doesn’t even give a warning when the viewer takes a screenshot.

Amazon wants to pay you $ 10 to scan your palm

Last year, Amazon began making customers pay for goods in its till-free grocery stores by swiping their handprint over a biometric scanner. Now they are paying new customers $ 10 to scan their printout and board. That story was hugely popular on the website this week, and I wonder if it’s because people are crazy about Amazon gobbling up all of this biometric or because they want the $ 10. Probably a bit of both.

RIP fleets. Less than a year after Twitter decided it was also necessary to clone Snapchat Stories, the company abandoned the concept. Why? They say it hopes it will attract new users; instead, the only people who used it were the ones who were already pretty hardcore.

The buy it now and pay later space got really big very quickly, and Square wants a world-shattering $ 29 billion.

The new Nest cams from Google

Google launched some new Nest camera gear later this month, including some things you might not have done before – like a battery-powered outdoor camera and a motion-activated floodlight camera for your porch.

The funny news: this week SpaceX put together the tallest rocket ship in history, with its fully stacked Starship rocket converging at an absurd height of 390 feet (or 475 feet if you count the launch pad). The less fun news: It’s not going anywhere for now as this assembly was just a fit test – assemble, disassemble, make sure nothing breaks. An actual launch of this mammoth configuration is not expected until later this year, but it should be quite a spectacle.

Five Factors Founders Must Consider Before Choosing Their VC

We’ve heard it over and over lately: with so much capital flooding the market, now is the time for founders to be selective about who to invest. But what should you watch out for? Kunal Lunawat, co-founder of Agya Ventures, has some comments on how well a VC understands your vision, from their background to their good ol ‘gut instinct.

Startups are tough enough without grappling with messed up finances. In this article, Zeni founder Swapnil Shinde outlines three different financial pitfalls that are easy to get into but avoidable: fragmented finances, old dates, and founders not knowing when / what to delegate.