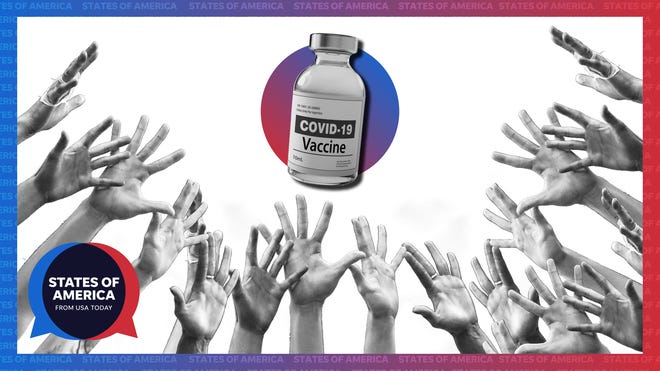 COVID-19 has killed more than 441,000 Americans, and infections have continued to mount despite the introduction of a pair of vaccines late in 2020. USA TODAY is tracking the news. Keep refreshing this page for the latest updates. Sign up for our Coronavirus Watch newsletter for updates to your inbox, join our Facebook group or scroll through our in-depth answers to reader questions.

Federal health officials announced Monday a $230 million deal to expand the use of a non-prescription coronavirus test that can be taken at home, with the goal of providing about 8.5 million tests a month in the United States.

The tests by the Australia-based firm Ellume can detect the coronavirus with 90% accuracy and can be used for people with or without symptoms, Andy Slavitt, the White House senior adviser for COVID-19 response, told reporters.

The tests, which the FDA authorized for use in December, send results to users’ smartphones within 15 minutes, and the swabbing is less invasive than the nasopharyngeal swabs of other coronavirus tests.

“Making easier-to-use tests available to every American is a high priority with obvious benefits,” Slavitt said.

Meanwhile, Slavitt and other members of the White House coronavirus response team urged states not to hold back on administering doses of vaccines out of concern that second doses won’t be available three to four weeks after first doses were given. And Dr. Anthony Fauci urged all Americans to get a COVID-19 vaccine when it is available to them, regardless of what manufacturer produced the shot.

►Giving COVID survivors only one dose of the vaccine wouldn’t negatively impact on their antibody levels, spare them from unnecessary pain and free up many urgently needed vaccine doses, a study suggested Monday.

►The U.S. Department of Homeland Security announced Monday vaccine sites will be considered “sensitive locations” and will not be targeted by Immigration and Customs Enforcement agents except in “extraordinary circumstances.”

►Dr. Rochelle Walensky, director of the Centers for Disease Control and Prevention said at a White House Covid-19 briefing Monday that the health organization had significantly increased its ability to detect new, more contagious coronavirus variants.

►While residents of nursing homes and their caregivers have been considered a top priority for COVID-19 vaccination, only 38% of nursing home staff accepted shots when they were offered, new data from the Centers for Disease Control and Prevention revealed Monday.

►A Detroit-area prosecutor is dismissing more than 1,700 tickets that were issued for violating Gov. Gretchen Whitmer’s coronavirus restrictions, saying Monday that Whitmer’s emergency orders were made under a law that was unconstitutional.

►The U.S. Centers for Disease Control and Prevention issued an order late Friday requiring people on airplanes, ships, ferries, trains, subways, buses, taxis and ride-shares to wear a face mask while waiting, boarding, traveling and disembarking. The order applies to those traveling into, within or out of the U.S. It goes into effect at 11:59 p.m. Monday.

► A top Connecticut official said Saturday that COVID-19 vaccines have been administered to enough nursing home residents in the state to potentially stop the transmission of the virus among those residents.

📈 Today’s numbers: The U.S. has more than 26.2 million confirmed coronavirus cases and more than 442,400 deaths, according to Johns Hopkins University data. The global totals: More than 103 million cases and 2.23 million deaths. Nearly 50 million vaccine doses have been distributed in the U.S. and 32.2 million have been administered, according to the CDC.

📘 What we’re reading: Studies suggest up to 80% of people who have COVID-19 symptoms experience a reduced or complete loss of smell or taste. Most survivors regain their senses in a few weeks. But some don’t, and researchers say they may go without them for the rest of their lives. Read the full story. 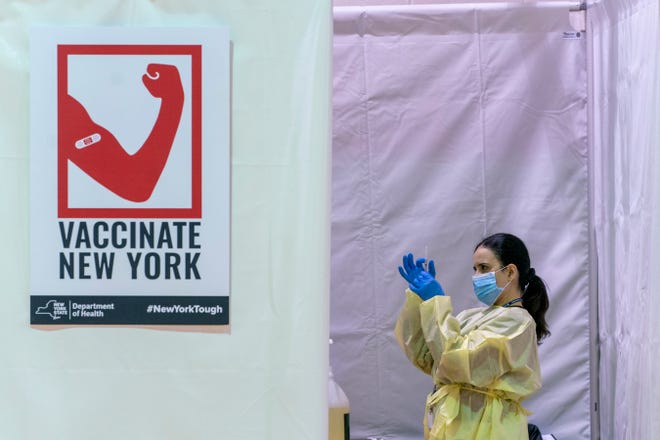 Should pregnant women get the COVID-19 vaccine? Experts say ‘no red flags’ in safety data so far

Some pregnant women remain unsure about getting the COVID-19 vaccine as safety data is scarce and health agency guidelines are vague and in some cases contradictory.

But Dr. Anthony Fauci, the nation’s leading infectious disease expert, said Monday that about 10,000 pregnant women in the U.S. have been vaccinated since the Food and Drug Administration authorized two vaccines and so far there have been “no red flags.”

“We had a lot of pregnant women vaccinated, the FDA followed them and will continue to follow them,” he said during a media roundtable at the IAS COVID-19 Conference: Prevention. “Even though we don’t have good data on it, the data that we’re collecting on it so far has no red flags.”

The Centers for Disease Control and Prevention guidelines say the decision is up to the mother in consultation with her health care provider. Fauci said Monday the agency is sticking with that recommendation.

Dr. Anthony Fauci urged all Americans to get a COVID-19 vaccine when it is available to them, regardless of what manufacturer produced the shot.

Johnson & Johnson released data Friday from its late-stage clinical trial on its vaccine candidate, which showed an overall efficacy of 66%. However, Fauci said the data show even more efficacy from the vaccine at preventing the most severe cases of COVID-19.

“The thing that is important that you need to put into the equation: You want to prevent people from getting seriously ill,” he said. “We want to keep people out of the hospital and we don’t want people to die, and with that regard, this will be value added.”

Andy Slavitt, the White House senior adviser for pandemic response, told reporters he does not expect an immediate dramatic shift in vaccine distribution if J&J’s vaccine received emergency use authorization from the FDA. The company agreed to provide 100 million doses by the end of June, and Slavitt said Americans should not expect them all to be delivered at once.

Vaccine sites around the Northeast will be closed Monday as a snowstorm hammers the region, creating blizzard conditions and prompting emergency declarations.

The snowstorm is set to derail vaccination appointments in at least six other states, as well, the New York Times reported: Connecticut, Maryland, New Jersey, Pennsylvania, Rhode Island and Virginia.

Other states, meanwhile, are awaiting the next vaccine shipments.

Health officials say three mass COVID-19 vaccination sites in Snohomish County, Washington, the first county to report the virus over a year ago, are closing Monday and Tuesday because of a lack of vaccines. Many providers in rural Idaho are also waiting for more supply, reported KLEW-TV.

In a White House press briefing Monday, COVID-19 Health Equity Task Force Chair Dr. Marcella Nunez-Smith also emphasized the need for better race and ethnicity data on vaccinations. After summarizing higher mortality and hospitalization rates among people of color, such as Black, Latino and American Indian people, she said she was “worried” about being “behind” on race and ethnicity data collection amid vaccine rollout.

“As of Jan. 30, we’re missing 47% of race and ethnicity data on vaccinations,” Nunez-Smith said. “Let me be clear: We cannot ensure an equitable vaccination program without data to guide us.”

Nunez-Smith said several factors are to blame, including uneven rollout among states and “inconsistent emphasis on equity in the early days of vaccination.”

She also pointed to missing data on current cases among people of color amid the recent surge of cases among white people. The current data, she said, doesn’t tell “the whole picture” because of a lack of testing in communities of color, leading to a lack of capturing those who are asymptomatic or have mild symptoms. Testing is more robust among people of color when they are at the point of being hospitalized, she explained – “which is often a function of inadequate access to testing in the first place.” Read more here.

January’s death toll shattered that of December’s 77,486 reported deaths, which itself vastly exceeded the previous record of 60,750 deaths reported in April.

With 6.1 million new cases reported in January, the month was second only to December’s 6.4 million, and far above earlier months. In mid-January the country was averaging a record of almost 250,000 cases per day, but those numbers have fallen to about 150,000 cases per day. That still leaves the United States alone in the world at reporting 1 million cases a week.

For Alabama (2,861 deaths) and California (14,937 deaths), January was more than twice as deadly as any other month of the pandemic. For 21 states, January became the deadliest month.

Teachers unions in serval cities were facing off with school district officials Monday as some reopening plans that would bring students back to classrooms were set to begin this week.

In Chicago, Mayor Lori Lightfoot said Sunday evening that the city had not reached an agreement with the Chicago Teachers Union on how and when to reopen schools in the nation’s third-largest district.

Cincinnati’s teacher union also sued to stop the resumption of in-person learning at its schools, which were to begin blended learning over four weeks, starting Tuesday.

Meanwhile, a judge ruled that Minneapolis teachers who had work-from-home accommodations or were applying for them would not have to return in-person Monday, the Star Tribune reported.

Triumph of science over COVID-19 waylaid by confusion, frustration

In late December, the idea that safe, effective vaccines against COVID-19 had been created in less than a year seemed miraculous. Pride in the remarkable feat, however, has been replaced by confusion, unfairness, frustrating waits and the nightmare of vaccine vials gathering dust while tens of thousands of people continue to die of what is now a preventable disease. Even people leading the effort are at a loss to explain what happened.

“I would love to understand it,” said Moncef Slaoui, head of the vaccine development effort under the Trump administration and now an adviser to the Biden administration. “What makes me sad is … the thousands of people that have worked day and night over the last many, many months really feel terrible, feel depressed, because the whole thing is now positioned as a disaster.” Read more here.

A USA TODAY analysis of new Census data shows that Americans missed more work than ever before because of child care problems in 2020, and the burden was shouldered almost exclusively by women.

The number of women with child care-related absences in any month more than doubled from 2019 to 2020. Women accounted for 84% of all workers who missed work in the average month last year because of child care issues – a five-year high.

Kristin Rowe-Finkbeiner, the executive director of MomsRising, a group that advocates for increased family economic security, said the current crisis has put preexisting problems into stark relief. Child care was already expensive, and providers operated at thin margins, she said, and then COVID-19 hit. A survey by the Bipartisan Policy Center found 70% of parents reported their pre-pandemic day cares either closed or reduced capacity.