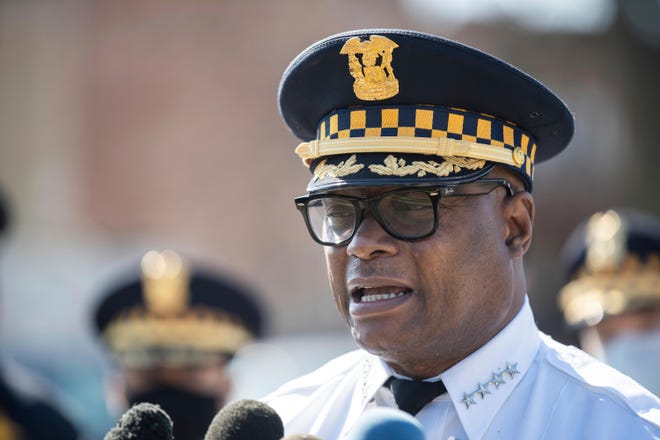 CHICAGO – A Chicago police officer was transferred to administrative service after he shot and killed a teenage boy in what an officer described as an “armed confrontation”.

The boy was Adam Toledo, who, according to the Cook County Medical Examiner’s Office, died of murder from a gunshot wound to the chest. Toledo, who was identified by the doctor’s office as a 13-year-old white man, lived in the largely Spanish-influenced Little Village district on the West Side.

According to a first police statement this week, the officers responded to a gunshot alarm in Little Village after 2 a.m. on Monday.

Two people were in an alley, fleeing from officers who police reportedly followed them on foot. The persecution “led to a confrontation,” police said. An officer shot the boy in the chest and he was pronounced dead at the scene. According to the police, the officers found a weapon at the scene.

The police do not all behave in the same way: White police officers are more likely to use violence, according to a study by the Chicago Police Department

Police spokesman Tom Ahern called the incident an “armed confrontation” in a tweet. He also shared a photo of the gun recovered from the scene and said the other man involved in the incident was in custody.

The Chicago Civilian Office of Police Accountability, the agency investigating police misconduct, said in a statement that the incident was captured with a body camera. However, since Toledo was a teenager, the footage cannot be released without a court order. Materials that can be posted will be posted “within 60 days of the incident and in accordance with the city’s video posting guidelines,” COPA added.

“COPA is committed to a full and thorough investigation into the use of lethal force by officers to determine whether their actions are in accordance with the department’s guidelines and training and asks the public to be patient,” the organization said in a statement.

Chicago Police Superintendent David Brown called the incident – “a fatal encounter between one of us and a youth” – the “greatest fear” he faces in his role.

“Unfortunately, that fear became a reality earlier this week,” Brown said in his statement. “Every loss of life is tragic, especially when it comes to youth.”

He expressed condolences to Toledo’s family, saying the police department “wholeheartedly” supports the COPA investigation and is “relentlessly” demanding the release of videos – including Bodycam footage.

“Making a split-second decision to use lethal force is extremely difficult for any officer and always a heavy burden for officers involved in fatal shooting events,” Brown said.