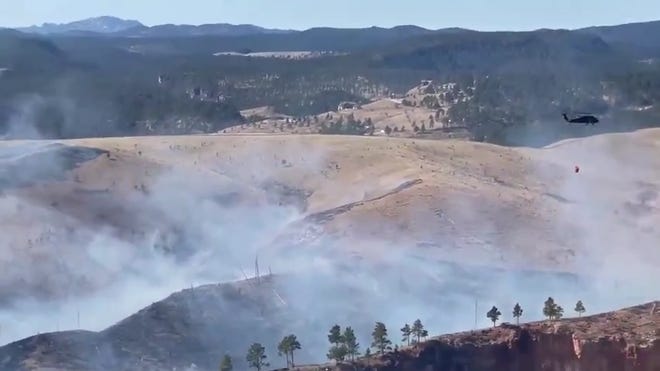 Firefighters on Wednesday made further progress in containing forest fires in South Dakota’s Black Hills, which previously forced the evacuation of more than 400 homes, closed Mount Rushmore and sparked a state declaration of emergency.

South Dakota Governor Kristi Noem signed an executive order on Tuesday in response to the severe drought and ongoing fires, declaring a state of emergency until June 1.

The order will allow the state to provide greater support to the response efforts of local and volunteer firefighters.

Firefighters have increased the containment of the largest fire in the Nemo, South Dakota area to 47%, the Pennington County Sheriff’s Office said in a Facebook post on Wednesday. The fire, known as the Schroeder Road fire, burned nearly 3.4 square miles.

Police officers opened some evacuated parts of the city, but only allowed people who live there. Residents have been asked to stay on their property and not call 911 unless there is an imminent risk of fire outbreaks.

The fire on Schroeder Road has reached two districts near Rapid City, according to the sheriff’s office. At least one house and several other buildings were destroyed. No injuries were reported.

Two smaller flames burned southwest of Rapid City, including one on the site of the Mount Rushmore National Memorial, which remained closed Wednesday.

The fire continued to burn in a steep, rugged land inaccessible to roads. Heavy air tankers and helicopters assisted firefighters on the ground as they sheltered homes and worked to contain the fire.

The wind remained a factor in fighting the fire, but wasn’t as strong as it was on Monday and Tuesday, firefighters said.

High winds and drought conditions also resulted in wildfire in western North Dakota, where a firefighter was injured in a fire truck accident due to poor visibility from smoke. The injuries are not believed to be life threatening.

An abandoned building burned in the flame, as did fences, power lines, and electricity pylons. Mark Hanson, spokesman for Montana-Dakota Utilities, said the fire damaged five of the company’s buildings and caused one to collapse.

It was believed that a failed power line started the fire.