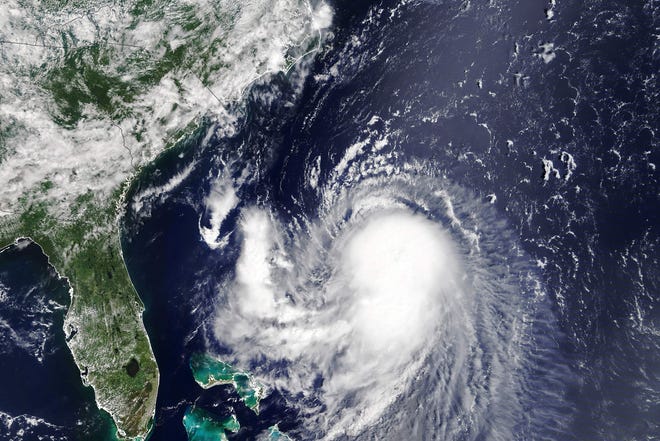 The northeastern US is preparing for its first direct hit from a hurricane in years as Hurricane Henri sped further north on Saturday.

The system, which was upgraded to a hurricane with winds of 120 km / h on Saturday at 8 p.m., is expected to hit Long Island or southern New England on Sunday with or near hurricane strength, with winds reaching up to 80 km / h. h, the National Hurricane Center said.

New York Governor Andrew Cuomo declared a state of emergency for parts of New York including Long Island, New York City and the Hudson Valley. At a press conference on Saturday, he urged people to take warnings seriously.

Threatening with dangerous winds, 3 to 6 inches of rain with occasional total heights of up to 10 inches, and up to 5 feet of storm surge, Henri threatens to be the first major hurricane to hit the region in years.

“This is the largest hurricane risk in New England in 30 years since Hurricane Bob in 1991,” said AccuWeather chief meteorologist Jon Porter. Bob was a Category 2 storm that killed at least 17 people.

Hurricane and storm surge warnings were in place for parts of Long Island and southern New England, the National Hurricane Center said. Over 5 million people live where there is a hurricane warning, the National Weather Service reported.

“Preparations to protect life and property should be completed quickly,” said the Hurricane Center.

Tropical storm warnings have also been issued for much of southern New England, Long Island, and southern New York, including New York City itself.

Henri was centered about 290 miles east-northeast of Cape Hatteras, North Carolina, and about 255 miles south of Montauk Point, New York, on Saturday afternoon. It was moving north-northeast at 18 miles an hour.

The weather service warned from Henri of the potential for harmful winds and widespread coastal flooding, and officials in Massachusetts, Connecticut and New York warned people could be out of power for a week or more.

Authorities urged people to secure their boats, refuel their vehicles and stock up on canned food.

Cuomo said he is dispatching 500 members of the state’s National Guard and deploying rapid water rescue teams. He said the state has also dispatched 500 national guards and has 1,000 state police officers deployed in the affected areas, as well as FEMA teams.

But he said unlike Sandy, pre-Hurricane Henri residents received less attention due to recent changes in the storm’s trajectory.

Rhode Island Governor Dan McKee signed a declaration of emergency on Friday before the storm, the governor said at a press conference on Saturday.

McKee said residents should prepare for floods, high winds and currents. State beaches and parks will be closed on Sunday and maybe Monday, he said. He suggested securing houses and boats, gathering supplies such as additional food and water, charging electronic devices, and preparing flashlights and generators.

Massachusetts Governor Charlie Baker on Friday urged people vacationing in the Cape to leave long before Henri’s hit and those planning to vacation there postpone their plans. “We don’t want people stuck in traffic on Cape Cod bridges when the storm is at full strength on Sunday,” he said.

Henri (pronounced ahn-REE) will stay off the coast of the mid-Atlantic beaches until Saturday as he moves north. Beaches from Savannah, Georgia to Atlantic City, New Jersey can expect some indirect effects from the storm, including rough surf and the possibility of dangerous rip currents.

Hurricane Grace crossed Mexico’s Gulf coast as a severe Category 3 storm early Saturday and soaked small fishing villages and beach resorts when it hit land for the second time in two days. At least eight people have been confirmed dead, the authorities said.

The storm had lost its force as it crossed the Yucatan Peninsula Thursday and swirled through Mexico’s main tourist route, but it quickly drew power from the relatively warm Gulf of Mexico as it made its way towards the mainland of the country.

The Hurricane Center said Grace had maximum sustained winds of 125 mph on Saturday when it hit land about 30 miles south-southeast of Tuxpan. At 5:00 p.m. Grace was weakened to a fault, traveling at a speed of 13 mph with a maximum sustained wind of 25 mph west, 65 miles from Mexico City.

Among the eight dead were children, said Cuitláhuac García, governor of the Mexican state of Veracruz. In addition, at least three were missing after mudslides and floods. The 33,000 people who lost their power supply due to the storm are gradually being supplied with electricity again.

Forecasters said Grace would lose strength quickly if she whirled inland over a mountain range and carried her heavy rains into the heart of the country, including the Mexico City region. Forecasters said it could drop 6 to 12 inches of rain, with more in some isolated areas – putting the risk of flash floods, mudslides, and urban flooding.

“Although Grace has disbanded, her remains are likely to migrate to the eastern North Pacific by Sunday afternoon, where they will likely develop into a new tropical cyclone next week,” said the National Weather Service.